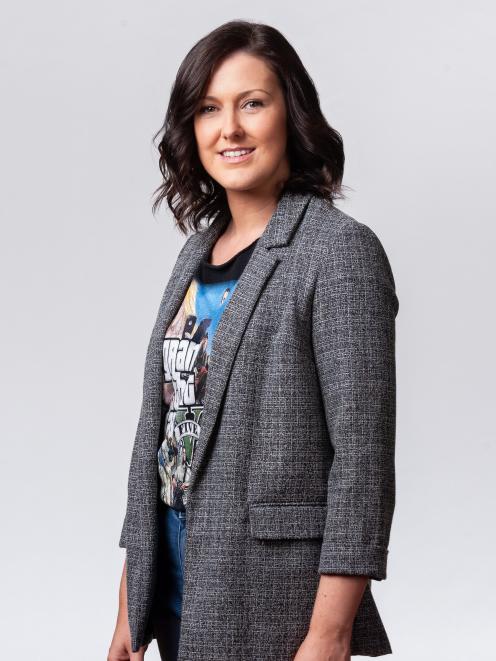 Leanne Ross, of Dunedin, will take over as executive director of the New Zealand Games Developers Association in January. PHOTO: SUPPLIED
For Leanne Ross gaming is personal.

Last week the Irish-born Dunedin woman was appointed executive director of the New Zealand Game Developers Association at its annual meeting, which she described as very exciting.

The association was founded in 2004 to be an advocacy group for more than 50 digital media and video game studios across the country.

Mrs Ross moved to New Zealand from Belfast five years ago with her Oamaru-born husband, Bronson Ross, who had been playing rugby professionally in Europe.

Her career so far has been in communications and digital marketing, and her first job in New Zealand and the gaming sector was marketing lead at Dunedin’s Runaway Play.

Since then, she has been in multiple roles, including teaching marketing management at the University of Otago as well as sitting on various boards.

Her most recent role was director of marketing, sales and communication at Otago Polytechnic — leading the polytech’s critical incident management planning through Covid-19.

Mrs Ross said she had been looking to move on to the next stage of her leadership journey and the new role at the association "just seemed like the perfect fit".

Despite not having a background in game development, gaming had been a very important part of her personal life.

Her 13-year-old son had high-functioning autism and after being diagnosed at 2 years old, had delayed speech, leading to problems with communication.

"So he has had an iPad in his hands since that day and that is how he has learned to communicate," she said.

Gaming and digital media continued to play a big role in his life and his ability to be social with his friends.

The benefit he got from gaming was what drove her passion for the industry, she said.

There was an unhealthy stereotype that gaming was bad for people, but two-thirds of New Zealanders — half of whom were women — played video games regularly.

"The idea we often have in our heads is that it is all young men that are quite isolated ... It is quite wrong," Mrs Ross said.

One of the strategic goals for the game developers association was pushing for diversity and inclusion to help change that stereotype and encourage more women and Maori and Pasifika into the sector, she said.

For children such as her son, she believed it gave them something that allowed them to be themselves, whereas they might struggle in another setting.

"It allows them to learn how to deal with failure, resilience, strategy and coming together for a common goal," she said.

It was a both an exciting and challenging time to be entering the gaming industry, Mrs Ross said.

People did not realise how globally respected New Zealand’s sector was, especially after the recent news Wellington’s Weta Workshop being sold to US game development company Unity for $1.6billion.

The sector could be a $1billion industry by 2024 but that was at serious risk from competitors across the Tasman.

Earlier this year, the Australian Government announced a 30% tax relief for its games industry.

That had the potential to be "really, really economically damaging" for New Zealand’s sector with it now being cheaper to run an operation there.

It also could be damaging the sector’s workforce in New Zealand with Australia looking to recruit local talent.

"It is already hard enough for us to attract and retain those skills and pay the salaries for them, so we are really worried about that," she said.

Going into her new role, she knew that was something the association would have to push the Government on, Mrs Ross said.

"Studios are already looking at relocating and that would be such a loss, not just economically but also for expanding our sector."

Next year alone it was estimated the sector would create 330 jobs in New Zealand, which needed to be protected, she said.

"We don’t want to lose that growth we are currently seeing."