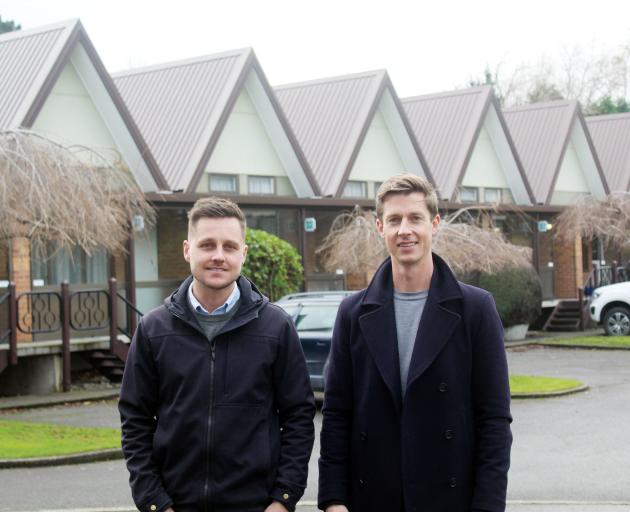 Your Property Solutions directors Billy McLachlan (left) and Slade Hocking, both of Christchurch, in Invercargill yesterday. PHOTO: BEN TOMSETT
Slade Hocking wants to help "reactivate" the South’s commercial buildings, breathing life back into spaces he says should not go to waste.

Yesterday, the director of Your Property Solutions (YPS) and his business partner Billy McLachlan visited Dunedin and Invercargill scouting out potential earthquake-prone buildings to refurbish.

The company started in the aftermath of the 2011 Christchurch earthquakes; it purchased and redeveloped earthquake-damaged residential properties in the city.

It now wanted to expand that into earthquake-prone commercial buildings in the lower half of the South Island, Mr Hocking said.

On Sunday, meetings were held with building owners in Ashburton and Timaru and again in Dunedin and Invercargill yesterday.

There was a "massive" opportunity in the South, particularly in Dunedin’s Princes St, to help fix buildings and give them a new lease on life, he said.

Owners of earthquake-prone buildings struggled to sell on the open market because banks were unlikely to lend to potential purchasers of damaged buildings.

Mr Hocking estimated as many as 30% to 40% of commercial buildings in regional towns were earthquake-prone and required significant capital investment for upgrades.

Owners served with a earthquake-prone building notice from local councils had to carry out seismic strengthening work or demolish them by a set deadline.

That left them with "significant issues and a massive headache", he said.

YPS would not demolish them. Instead, it would buy the buildings for up to $10million, refurbish them and then put them back on the market.

"We want to help reactivate spaces that might have been neglected for various reasons and help them come to life again," he said.

The response so far from owners had been "great" as it gave them a way out of a "massive problem".

Part of the company’s investment strategy was to protect heritage buildings.

YPS did not own any properties in Dunedin or Invercargill yet, but Mr Hocking said it was in the early stages of negotiations for some.