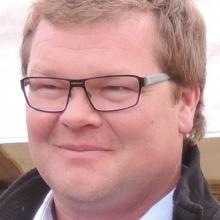 Blair Skevington.
Contractors and suppliers to Oceana Gold in Macraes, East Otago have been buoyed by news the mine could  have its life extended  to a decade.

Like Rio Tinto’s aluminium smelter at Tiwai Point, near Bluff, the company employs hundreds of staff but the flow-on effect of contract work accounts for many more pay packets overall.

Oceana’s chief executive earlier this week raised the possibility of Macraes’ mine life being pushed out from beyond 2020 to 10 years, on the back of positive exploration results during the past quarter.

Oceana general manager at Macraes Dale Oram was contacted and confirmed exploration  at Macraes was accruing at a rate that in two years could mean a formal five-year mine life.

Oceana has more than 500 employees at Macraes, using a further 60 contractors on site and for shut-down maintenance, and can employ a further up to 150 casual staff.

Skevington Contracting managing director Blair Skevington  said the potential for a 10-year mine life was "pretty huge for us", being one of the larger contractors to Oceana.

"Yes, there should be some potential for [company] growth for us," he said.

Skevington is a preferred contractor at Macraes and has been there 14 years, employing up to 13 staff operating the smaller earthmoving equipment such as diggers, bulldozers and lighter trucks.

"There would be a significant economic down side to Dunedin, and wider Otago, if Macraes closed. They have one of the biggest payrolls in the area."

Because of the high pressure  on cost controls, it was always "unsettling" for staff when they faced restructuring, such as changes to hours, rostering or salaries.

"We have differences of opinion ... but we’d like to think we can do it collaboratively," Mr Fisher said.

"People don’t realise just how many jobs, directly and indirectly, there are," he said.

Between Dunedin and Waikouaiti the company had almost 40 staff, doing most of the engineering work on the Macraes ore-processing equipment.

Mr Black said the length of mine life was "all important", as Oceana was more likely to upgrade equipment sooner if the formal mine life was five years and not three years.

Mr Oram highlighted Macraes had to "compete" with Oceana’s other sites for exploration cash each calendar year.

Exploration spending this year at Macraes is likely to come in at the budgeted $US8 million ($NZ10.9 million).

He was "hopeful" Macraes would attract similar, up to $US8 million, amounts for exploration for both 2018 and 2019.

He said not all areas had been explored as planned this year, but more drilling was proposed at the Round Hill site, where studies had been undertaken into dual tungsten and gold mining.

However, the price of tungsten had since fallen and there were processing issues that were still being studied, he said.

"More than likely it will be a gold site, but it’s make or break if it goes ahead."

He had appointed a community and environment manager this year, given the interaction with local stakeholders, such as farmers, who saw the greatest impact from mining activities, he said.

"Some locals mentioned the other day they were expecting us to be here for five or seven years, but here we are 27 years on," he said.