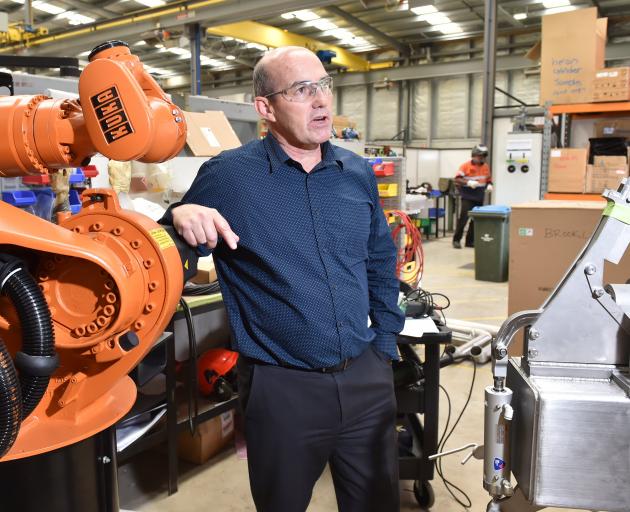 Scott Technology chief executive Chris Hopkins with a robotics prototype. The company will, as usual, be spending 5%-10% of revenue on research and development this financial year. Photo: Gregor Richardson
Coverage of listed Dunedin companies Scott Technology and Pacific Edge  has featured prominently during the past year. Both are carrying a healthy $20 million-plus cash in hand into the new year, so brokers from Craigs Investment Partners and Forsyth Barr ran their rulers over their respective outlooks for 2018 and tell business reporter Simon Hartley what they found.

Operating globally in niche engineering markets, Scott Technology finished 2017 on a high, as usual holding over some good news for investors to soak up at its annual shareholders’ meeting in early December.

Not that they were necessarily in immediate need of more good news.

It has been 18 months since Brazilian food giant JBS took a controlling 50.1% stake in Scott and its share price had since then gained more than 130%, trading well above the $3.50 mark.

The shareholders heard that not only had Scott just secured a further $21 million in new forward orders, but that figure took its full order book to a record $80 million, to be played out over the next 10 months.

As of December 1, Scott had $26million cash in hand, pencilled in for accretive bolt-on acquisitions, and had during the past year looked at about 30 business propositions. Diversification beyond manufacturing assembly lines has paid off, and the company has inroads and revenue streams now from industrial automation, meat sector robotics and the mining industry. 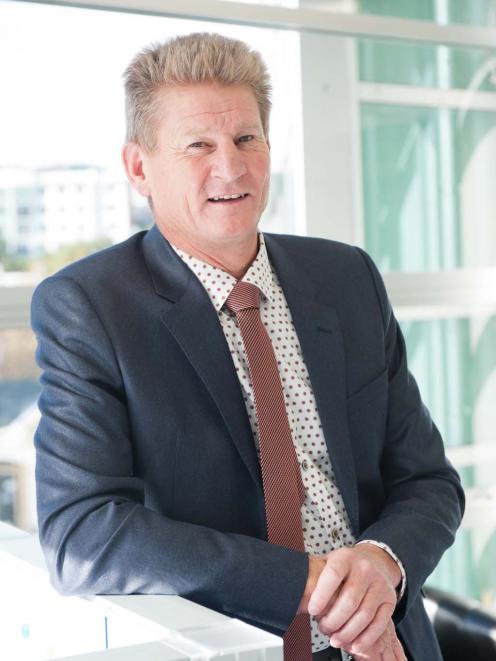 Pacific Edge chief executive David Darling. Photo: Supplied
In past years, the strength of the New Zealand dollar against its US counterpart had stifled Scott profits, given long lead-in times towards actual manufacturing and getting final payment. Much of its offshore work is denominated in US dollars.

"Scott’s in a sector where demand for its  products, particularly automation, are in a ‘sweet spot’.

"The risks however are always currency and a slowdown in the world economy," Mr McIntyre said.

Another point Scott mentioned in its full year result was obtaining quality and skilled staff which could be problematic in the longer term, he said.

"Scott did qualify that statement by indicating they were becoming an employer of choice. Wage escalation could also be added to the mix."

On the question of any tailwinds assisting Scott during 2018, Mr McIntyre said its  outlook statement was strong with forward work of 10 months and a strong pipeline.

"You’d expect forward work flow to be around that time frame but they also indicated their sales pipeline was strong," he said.

Being on the wrong side of foreign exchange fluctuations was "not a major risk now" for Scott, given its US trading made up about 27% of total revenues. However, Mr McIntyre cautioned there was some currency risk with the Australian dollar.

"They have a hedging programme in place to mitigate foreign exchange risk.

"Almost all currency forecasts are for a lower New Zealand dollar over the next 12 months; a positive for Scott," he said.

He did not believe Scott’s widespread diversification could be problematic in the future.

"Diversification is good in any financial sense. It also means they develop further market opportunity and product intensification/new product opportunity.

"Remembering, too, that they have a large international player [50.1% shareholder] with JBS driving mandates as well," Mr McIntyre said.

From an investment point of view, not only was Scott in the "sweet spot" with  its  product offerings, the company would continue to invest in research and development, annually about 5%-10% of total revenues.

"And Scott have a strong cash position for further acquisition," Mr McIntyre said.

Scott’s growth rates were an impressive compound rate of  20% based on revenue for the last 10 years.

"They have good management but investors do struggle with the lack of liquidity traded through the NZX.

"In saying that, local investors are very loyal to the company and  like the fact it’s a local company listed on the NZX, and the progress the company has made especially over the last five years," he said.

"We [Dunedin] need more of these companies. Dunedin does have arguably the strongest engineering cluster in the country," Mr McIntyre said.

Forsyth Barr broker Damian Foster said Scott had a gross dividend yield of 3.86%, noting the stock was up about 75% over the past year.

Its market capitalisation at $3.60 per share was $71million and its earnings were higher than the average for a New Zealand company.

"The question for investors is whether the potential growth prospects of the company justify the higher price being paid in the market," Mr Foster said.

He said paying a higher multiple for growth companies could still be lucrative, so long as earnings growth continued to meet or exceed market expectations.

Dunedin cancer diagnostic company Pacific Edge also goes into 2018 with high expectations, optimistically  holding about $24million in new capital to maintain operations for the next 13-14 months.

The US market remains its focus but its products are being rolled out into New Zealand district health boards and Asian destinations, although it is the crucial US market where the real revenue stream awaits.

Pacific Edge has a laboratory in the US and Dunedin and has four patented products in its suite of Cx-bladder  products, either to identify or to assist  with ongoing definition and treatment of bladder cancer.

While its non-invasive, urine-based Cx-bladder tests are far cheaper than conventional and invasive testing, Pacific Edge must patiently wait for the more  than 11,000 urologists in the US to take up Cx-bladder, which when combined with its numerous contracts with US health providers, opens the doors to tens of millions of potential patients.

Patience has become a key trait for long-term Pacific Edge shareholders since 2003.

At least seven capital raisings have been successfully executed to keep the company operational; and it now has 466.3million shares on issue.

"The success of Pacific Edge will be determined by the commercial success of Cx-bladder, its first commercial product, in the US market," she said.

While Pacific Edge also has a suite of new genetic marker products under various stages of development, including for melanoma, colorectal cancer, endometrial and gastric cancers, it has not released a detailed breakdown of advancements.

"Though this view continues to be tested, with progress taking longer than anticipated and additional capital being required in the interim, there has been nothing to date to change our view that the prize is large and the company well positioned."

However, in the short term Pacific Edge continued to take longer than expected to "tick off" the critical commercial milestones, she said.

Since 2003, Pacific Edge’s accumulated losses had gone beyond $100 million and in November  it completed a $21.3million capital raising to boost its remaining $4million cash in hand.Its monthly cash burn for the current financial year is expected to average about $1.6million.

"We estimate Pacific Edge has a net cash position of around $24million ... which provides about 14 months [operations] at current cash burn rates," Ms Howe said.

It was reported in late November that for its half year to September, Pacific Edge’s operating revenue rose 41% to $4.2million, its Cx-bladder cancer tests up 26% to 7107 for the period and its reported loss was down 23% on a year ago to $8.9million.

Ms Howe noted revenue no longer included any accrual from the large US public health insurer CMS, where timing of reimbursement remained "unpredictable and outside Pacific Edge’s control".

Craigs Investment Partners broker Peter McIntyre said while commentary had suggested revenue growth and test adoption had been strongest in New Zealand, those paying for tests so far in the US and other markets "has been on the slow side".

"Receivables are now over $8million, or almost one year of operating revenue, indicating Pacific Edge’s customers have been extremely slow in paying," he said.

Subsequently, Pacific Edge was obliged to write off a "staggering" $3.2million in bad and doubtful debts in full year 2017, or 40% of the $8million, Mr McIntyre said.

"Pacific Edge has a problem with the quality of revenue which is creating significant drag on cashflows," he said.

He said while management had emphasised expenses had fallen 11% in the half year, year on year, that entirely reflected the winding up of an employee share option scheme.

Pacific Edge in October said for the first time it expected to break even in full-year 2019, estimating payments for more than an estimated 23,000 tests that year would leave it in a positive $3.5million cash flow position.

Ms Howe said a "key milestone" for Pacific Edge was getting Cx-bladder approved  for reimbursement by the remaining US public health insurers.

"Gaining acceptance and reimbursement from the medical community is critical to success, but takes time," she said.