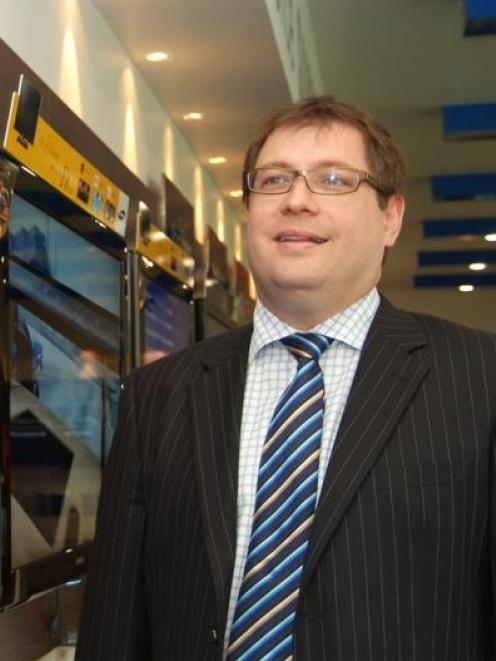 Jean-Philippe Diel. Photo supplied.
Jean-Philippe Diel is a victim of his own success. The rugby-loving Frenchman has overseen spectacular growth for Samsung in New Zealand. Dene Mackenzie caught up with Mr Diel in Auckland.

Meeting someone in Auckland whom you have never seen before is always a bit of a challenge.

The helpful public relations consultant described Samsung New Zealand general manager marketing Jean-Philippe Diel as resembling a rugby prop - which, as it turned out, he was.

In the end, Mr Diel was easy to spot in a cafe situated alongside Auckland's viaduct basin.

Ordering coffee, we found we both liked it black and strong, unlike the Auckland PR person, who ordered a latte.

And we both enjoyed taking the proverbial out of the latte drinker before getting down to business.

Mr Diel arrived in NZ four and a-half years ago after spending time working around the world in the food and communications industries.

When it was time to choose a new country and a new job, he left the choice with his girlfriend.

She chose New Zealand and, happily, the choice worked out well.

His mission was to set up a marketing approach for Samsung products in NZ while working for the distributor, Radiola.

"I did too well. Two years later, a Korean executive came to New Zealand to set up a subsidiary. The brand has made huge progress in the New Zealand market."

Samsung NZ was established as a new company in November 2006.

At that stage the annual turnover in this country was $US48 million ($NZ63.4 million).

"I have been part of a crazy ride. It has its moments of scariness like being on a 100-miles-an-hour ride.

"It is an exciting ride."

Technology was also an exciting field in which to work, Mr Diel said.

Each time a new product was released, he would look and think that was the top of the line; nothing could surpass it.

"Then, my God, they release something else. It's great."

Although Samsung was making good progress into the NZ market, there was a nagging doubt about how well known the company was, he said.

When pollsters prompted people, Samsung received a 96% recognition, well ahead of the 72% received in 2004.

But the figure was much lower when people were not prompted about the company's business and products.

Asked what New Zealanders liked to buy from Samsung, Mr Diel had no hesitation in replying "big TVs".

Once 30in televisions were the first choice.

Now it was 40in and with the improved technology for LCD backlighting, larger televisions would soon be on display in Kiwi living rooms, he said.

But unlike many other nations, New Zealanders tended to go for the technology first and the design second.

"We need to demonstrate our worth to customers. It is performance first. So different from Asia where they like cute and stylish."

In New Zealand, Invercargill and Queenstown had some of Samsung's highest value customers.

People in those areas were buying the largest and the best products on offer.

Mr Diel said the company realised it would be foolish to focus just on metropolitan areas like Auckland when high-value customers lived in other parts of the country.

The latest "revolution" in LCD screen lighting involved removing the white light from the back of each pixel and replacing it with the same colour as the pixel.

That gave a better black, something technicians had been battling with for years, but also brighter colours.

The new technology was likely to attract New Zealanders to new televisions, he said.

Although some content of New Zealand television was in HD, much of it was not, something viewers found hard to understand.

They bought a new television and expected miracles.

However, the viewing experience related to the source data.

If that was not formatted correctly, the end product would not be as sharp as the new Bond movie, Mr Diel said.

"We want to make sure people understand the TV is not to blame. There will be public pressure for better content.

"Once that happens, HD will move rapidly up the curve."

It was likely HD content would come at a fast rate in NZ because this country was behind the United States and Europe.

Mr Diel's parents, in France, kept telling him they did not need a bigger television with the HD content, until he sent them one.

Now, they wondered how they even watched the previous television, he said.

Samsung was also pushing into the mobile phone market with both Telecom and Vodafone sourcing phones from the company.

Samsung had produced an Adidas phone with sports features, including a heart rate monitor.