Set on a quest to treat ME 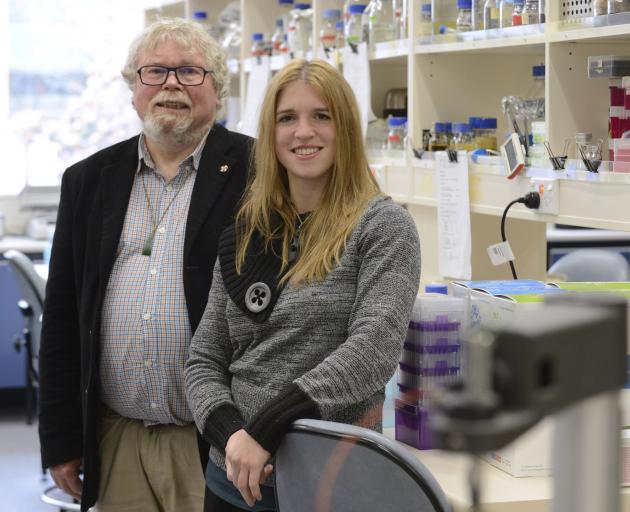 Prof Warren Tate and Dr Eiren Sweetman. Photo: Gerard O'Brien
Thousands of New Zealanders cannot work or live normal lives because of a disease difficult to diagnose and nearly impossible to treat. University of Otago professor of biochemistry  Warren Tate explains to business editor Dene Mackenzie how he continues to search for a better future for sufferers of chronic fatigue syndrome.

Passionate and parental are two words which can be adequately ascribed to University of Otago  professor of biochemistry Warren Tate.

Faced more than 25 years ago with a 14-year-old daughter who suddenly went from a vibrant and energetic girl to being mainly bedridden, he had a moment.

There was such a dramatic change in the health of his daughter Katherine, he was left wondering what had happened.

"This is fatigue like I have never seen before. My daughter would go from the bed to the shower, sit down in the shower, go back to bed and take three hours to recover from that.

"The natural instinct of a parent is worry and concern, but as a medical professional used to dealing with the system, I was frustrated."

Prof Tate and his wife, also a medical professional, were used to dealing with the ins and outs of a medical system which can be daunting for people seeking help for their illness.

His daughter became intolerant to some food, meaning the family had to start from scratch to find out what she could and could not eat.

One of the hardest decisions was asking an older daughter studying at the University of Canterbury  not to come home because her sister had become overly sensitive to noise, heat and light.

A frustrated home renovator, Prof Tate found he could not even bang in a nail at the weekend for fear of upsetting his daughter.

The effect of the disease on his daughter sent Prof Tate on a mission to discover more about chronic fatigue syndrome and he has spent countless hours researching, writing and talking about his findings.

The recent ME Week highlighted how little was known about the disease, he said.

There was a lack of social acceptance and recognition of the way it could force people to lie in bed, in a dark room, for most of a day — people rising only to carry out some basic life functions for a few hours before being forced back to bed.

Prof Tate felt the disease was neglected by the medical system. There was no diagnostic test and most medical professionals did not know how to deal with it.

People presenting with symptoms to their GPs were faced with few options. GPs wanted their patients to get better and sufferers of ME/CFS were unlikely to respond to any treatment.

"As a medical professional, I have empathy with the GPs."

There were an estimated 20,000 to 25,000 sufferers in New Zealand, some of them living in isolation.

People remembered Tapanui flu but did not realise how debilitating it could be, Prof Tate said.

However, he continues to live in faith — faith funding will come through and faith he or other global researchers will find a cause of the disease.

Recently, there was something of a global celebration when overseas research concluded a retro virus, similar to HIV, was the reason for ME/CFS.

"People became very excited but it proved to be a contaminated sample. It was devastating for people who hoped there was a reason for their illness."

ME was like a state of hibernation for sufferers, he said. People were shutting down in response to some threat to their systems, similar to animals hibernating in winter.

They could not lead classically normal lives. About 25% of sufferers were bedridden or housebound and three-quarters of sufferers moved to a chronic state.

But there was hope.

"The moment my daughter got up from her bed was like a religious moment. These are resilient people, using their fortitude to pull themselves up."

The growth of IT as a career option had been a boon to people such as Prof Tate’s daughter who could lie in bed and work. Others were not so lucky.

He employed someone recently who worked when she could. But often, she could not last long and needed to go home.

People were sitting in New Zealand workplaces unable to function properly but were being told by supervisors to just get on with it.

Young women were more at risk from the disease, often having to leave work, he said.

"There are plenty of figures around saying how our productivity is affected by this sort of situation.

"Recently, a young woman said how lucky my daughter was to have me as a father because I understood. Her father says just get on with it. This is what people have to live with," he said after pausing to compose himself as tears welled in his eyes.

"Families are grateful when I say I understand."

Some sufferers were on a sickness benefit but had found their status changed when work tests from Work and Income were altered. The people were sent to a "designated doctor" who usually told them there was no reason they could not work.

International groups were keeping up a steady flow of research papers as the desire to find out more about the disease intensified, Prof Tate said.

If the disease had no diagnostic tests, the most obvious question was how was ME/CFS diagnosed in patients?

Prof Tate said one GP in New Zealand — Dr Rosamund Vallings, of Howick — had devoted her practice to the disease. She travelled around New Zealand training GPs in recognising ME/CFS. But it was a difficult job.

"I would understand it less without having been through it with my daughter. We don’t have enough tools. We can offer encouragement and by sometimes being a friend. There is a little bit of conflict there as I cannot be a friend for everyone. Although, some people just need a friend."

Good clinical case definitions were emerging and Dr Vallings had diagnosed many of the people suffering in New Zealand. She knew the symptoms to exclude such as general fatigue and pain, anaemia and cancer.

Previously, people had been told to exercise to help them through it. That had proved incorrect, he said.

After exercise, sufferers could be "poleaxed".

As a recipient of the Rutherford Medal, a prestigious honour from the Royal Society, it was expected Prof Tate would have access to all sorts of funding.

That had not proved to be the case. Despite him being deeply involved in various scientific and funding bodies, funding did not come easily and when it did, it was never enough.

Mainstream funding was likely to go to "more attractive" diseases such as diabetes, he said.

Recently, a Mid Canterbury farmer contacted Prof Tate to talk about his symptoms and what could be done about them. The long conversation ended. Later, the university received a $90,000 donation from the farmer to go towards research on ME/CFS.

Chronic fatigue syndrome (CFS) is a complicated disorder characterised by extreme fatigue that can not be explained by any underlying medical condition. The fatigue may worsen with physical or mental activity, but does not improve with rest. This condition is also known as systemic exertion intolerance disease (SEID) or myalgic encephalomyelitis (ME). Sometimes it is abbreviated as ME/CFS.

You may need a variety of medical tests to rule out other health problems that have similar symptoms. Treatment for chronic fatigue syndrome focuses on symptom relief. Signs and symptoms may include: