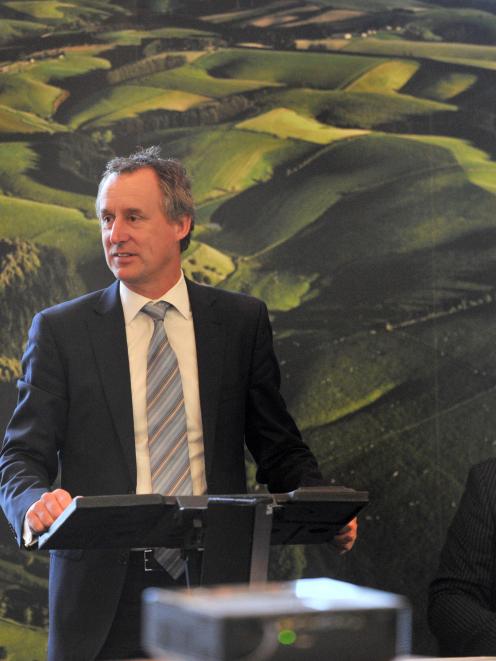 Chief executive Dean Hamilton addresses Silver Fern Farms' annual meeting in Dunedin yesterday, watched by chairman Rob Hewett. Photo by Sally Rae.
An appeal has been made to Silver Fern Farms to ''not sell the goose that has the potential to lay the golden eggs''.

Speaking at the co-operative's annual meeting in Dunedin yesterday, Meat Industry Excellence member Mark Patterson said farmer ownership of the value chain would be ''incredibly important'' and the company's proposed capital raising had the potential to dilute that.

The ''cavalry'' could come from Invercargill ''rather than Shanghai'', Mr Patterson said, referring to Invercargill-based rival co-operative Alliance Group. MIE has been pushing for a merger of the two co-operatives.

That process was under way and a ''number of parties'' had expressed interest, chief executive Dean Hamilton said.

It was expected to have a ''clear understanding'' in May-June of the opportunities; at the moment the company was ''no further ahead'', he said.

Clinton farmer David Shaw, a former Silver Fern Farms director, asked if there was outside investment in the company, what changes would be made in the constitution to ensure the years of heritage farmers had contributed were not diluted and put at risk by ''future attack or manipulation'' by that outside shareholder.

Chairman Rob Hewett said the process had just started and it would take until the end of May or early June, for the board to have a better view and be able to answer questions.

The board wanted Silver Fern Farms to remain a co-operative. Ideally, he would love existing shareholders and non-shareholders to share up.

Realistically, he did not think that was going to happen. There would be some, but how much he did not know.

The reality, he believed, would be some form of equity from outside, but answers could not yet be given on how that would unfold.

''We'll certainly be coming back to you,'' he told the farmers attending the meeting.

Reviewing the past financial year, Mr Hewett said the company had made solid progress. Highlights included efficient plants and a general reduction in running costs, strong commodity product demand in 2014, especially for beef in the United States and lamb in China; continued focus on managing inventory levels; realised capital/reduced debt with sales of under performing assets and collaborations with others, and continued growth in value-added sales through new products and markets.

It was particularly pleasing to report significant debt reduction achieved; $99 million of debt reduction was ''outstanding'' and the result of a lot of hard work.

While pre-tax profit of $1.8 million for the 2014 year was not satisfactory, in terms of a $38 million improvement on the previous year it was ''clearly a big step in the right direction'', Mr Hewett said.

Mr Hamilton said the company had set some simple goals, which included a focus on zero harm in the workplace, further improving the company's profitability in a material and sustainable way; achieving milestones towards the company's initial target of 10% of revenue through value-added sales by 2017, and creating a sustainable capital structure.

Disappointments over the past year included falling short of achieving its full net working capital reduction, the sheep meat business not performing to its potential, failing to resolve all the company's non-core operations and assets, and no progress being made on industry structural improvements.

There had been a positive start to 2014-15 and the company's first three month's profit was above budget and above last year's. Debt and inventory levels were below last year's, Mr Hamilton said.

The Employment Relations Authority (ERA) decision, which ruled it made more than 100 Silverstream meat workers redundant, came as a ''genuine surprise''.

The company was negotiating and doing its best to resolve that ''as quickly as we can'', he said.

Demand for lamb was reasonable, while weakened demand for mutton, due to a high domestic kill in China, was a concern.

China demand was positive for grass-fed beef cuts, while US port industrial action was causing some near-term uncertainty.

Mr Hamilton was ''quite optimistic'' that the rate of decline in sheep numbers was about to level out, as dairy conversion numbers radically reduced.