Sheep and vineyards a winning combination 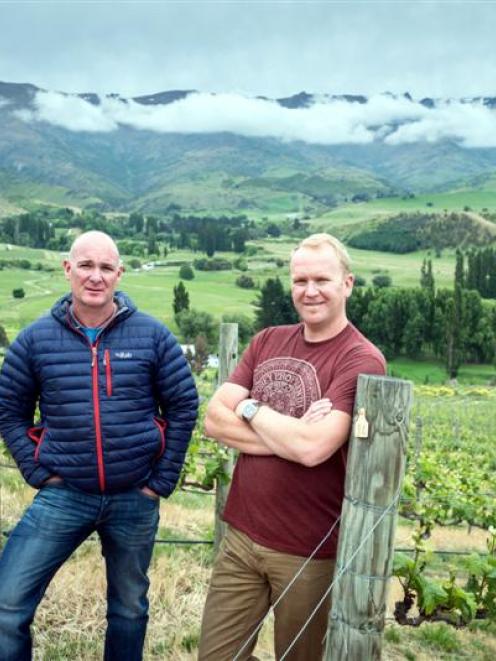 Viticultura co-owners Jason Thomson (left) and Timbo Deaker at Two Sisters vineyard at Lowburn, which is one of the vineyards finishing store stock. Photo by Alliance Group.
Timbo Deaker and Jason Thomson might know a thing or two about grapes but they admit they are ''totally green'' when it comes to sheep.

So it comes as something of a surprise that the pair, who operate Viticultura, a Central Otago-based business that manages vineyards and provides brokerage, consultancy and contracting services, supply lambs to Alliance Group.

Historically, they have given winter grazing to local farmers, but for the past two years they have bought their own sheep to fatten beneath the vines.

While Mr Deaker quipped they considered changing the name of their business to Pinot and Merino, they discovered that lambs with ''a bit of Texel'' in them were the most suitable.

The pair's foray into farming came after Mr Deaker read an article about a sheep farmer in Hawkes Bay who ''did not own a blade of grass of his own'' and it got him thinking.

While grazing sheep in vineyards was common, viticulturists owning their own sheep was not quite so usual.

''You appreciate horticulturists aren't into animals. We struggle to close gates, which is not particularly good for sheep,'' he said.

Fortunately, Mr Deaker had cousins farming in the Waikaka Valley, near Gore, who were ''very generous with their time and information''.

''I think they were laughing at what we were trying to achieve. We are totally green when it comes to sheep,'' he said.

The first year they bought about 1500 lambs, which turned out to be a few too many, as they ''spent a bit much money'' moving them from vineyard to vineyard.

However, the weather was favourable and they managed to make a ''reasonably good profit''. Last year they bought 800, which was a better number, and the initiative had proven to be a ''total win win'' for all involved.

Large quantities of water were used to protect the vines from frost when overhead frost-fighting began in mid-March. As a by-product of that, there was a ''huge amount'' of growth under the vines.

One Tarras farmer told Mr Deaker there was more feed on 20ha of vineyard than he had on his 600ha farm.

From a client's point of view, Viticultura could reduce their costs by not having to herbicide spray or mow their vineyards while the sheep were there.

The sheep contributed biomass through their manure, the pastures were parasite-free and they kept clean, and there was a return when it was time for slaughter.

Now the pair were getting a better understanding of ''how sheep work'', they were also getting on top of some grass grub issues that they had to spray for in the past.

While Mr Deaker and Mr Thomson were ''knee-deep'' in viticulture, it had been interesting to gain an understanding of a different aspect of farming. However, ''we won't put our hands up and say we'll make ... Young Farmer of the Year''.

Mr Deaker was recently looking at viticulture in Australia, where winter grazing of vineyards was being touted as an ''amazing new thing''.

Vast amounts of money were being spent to fence the vineyards to make them stockproof, whereas in Viticultura's case, all the vineyards were already fenced because of rabbit issues.

Because they were not set up to be farmers, they did have to invest in some mobile sheep yards, he said.

The pair had also discovered an ''odd phenomenon'': the number of Southland farmers who retired to Cromwell and came to them asking for tractor work in the vineyards.

''After about five or six weeks of being retired ... I think either their wives realise they don't like them being around the house, or they're completely missing the farm,'' he said.

As far as employing tractor drivers, ''to be honest, you couldn't wish for better'' than a retired Southland farmer.

''Those guys are just genius.''