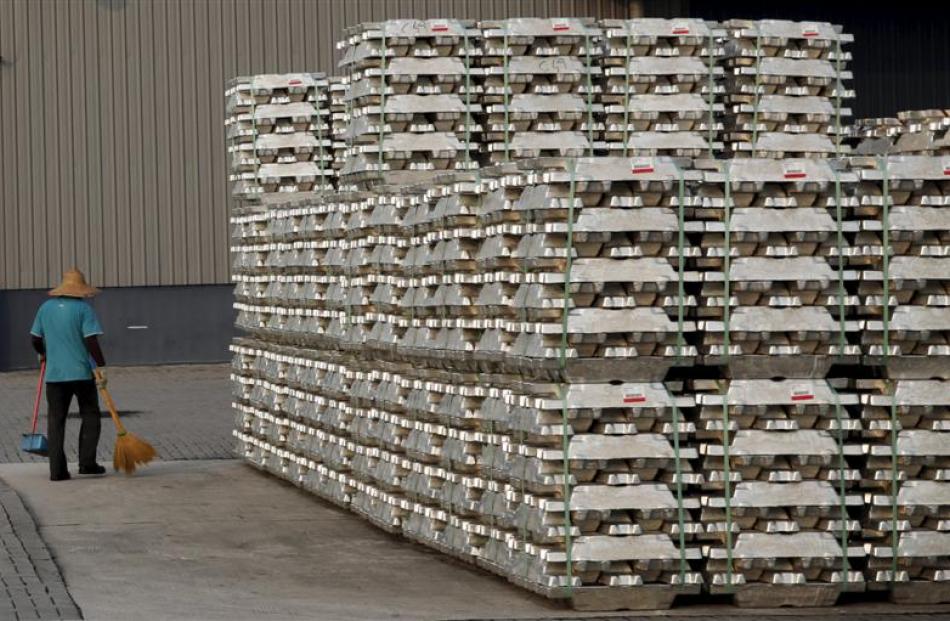 Aluminum and electricity prices are crucial to Tiwai Point's future. Pictured are aluminium ingots in Kuala Lumpur, Malaysia, being stored on behalf of the London Metals Exchange. Photo by Reuters.

The future of New Zealand Aluminium Smelters at Tiwai Point near Bluff has been thrust back into the limelight in a report by the Ministry for Business, Innovation and Employment.

Meridian Energy's generation from Manapouri supplies NZAS with the equivalent of 13% of New Zealand's electricity, but there is ''considerable uncertainty'' about its future, the ministry says, with a July deadline looming for a decision by smelter owner and Australian mining giant Rio Tinto.

Until Rio Tinto announces a decision, other power generators around the country are in limbo over issues of maintenance, upgrading, expansion or closing some of their respective assets, and then how the sector will respond to changes in electricity supply and demand.

But in July, NZAS could give two years' notice to quit the contract and close Tiwai Point, continue taking the present 572MW of power annually, or reduce the take to 400MW.

The ageing 44-year-old Tiwai plant has proved uneconomic at times when aluminium prices have been depressed and product otherwise unsaleable.

Southland has been a safe National seat for decades, but Tiwai represents almost 3500 direct and indirect jobs at stake, with a decision to close meaning the plant being shut down in 2017 - the next election year.

The ministry, in its draft ''electricity demand and generation scenarios'', is seeking submissions on eight situations, covering development of the electricity sector out to 2040, with the ministry's findings scheduled for publication in August.

The wide-ranging 56-page document considers supply, demand, pricing and a multitude of scenarios, but it does emphasise Tiwai in two of eight ''key areas of uncertainty'': either reduced demand or closure.

A summary of ''key insights'' includes that if Tiwai closed, electricity demand would require nine years to recover.

''The smelter is the largest single electricity user in the country, accounting for almost 13% of national electricity usage in the 2013 calendar year. The ministry's analysis of the considerable uncertainty facing the smelter suggests that three different levels for electricity demand from 2017 should be included in scenarios: baseload demand levels of 572MW, 400MW and . .. shut down,'' the report said.

NZAS' decision on going to either 400MW or maintaining 572MW was '' finely balanced'' and sensitive to assumptions and other variables, including aluminium prices, exchange rates and currency hedging costs, it said.

''Decommissioning the smelter after 2017 remains a realistic possibility.''

However, the ministry noted that for NZAS there was a ''real possibility'' it would opt to take 400MW annually, given it was at a discounted cost, and there was the likelihood that any additional electricity would be more expensive for NZAS.

In the scenario of Tiwai closing from January 1, 2017, the ministry said electricity demand nationally would decline 11% as a result and take nine years to recover to the same level.

Despite the Government's $30 million handout, for its trading year to December 2013, reported last June, NZAS booked an $18 million loss compared with its $49 million loss a year earlier.

The options for NZAS with a July 30 deadline:

NZAS power use decision at Tiwai Point is ''sensitive'' with several variables:

• Future exchange rates between the New Zealand and US dollars.

• The price at which to hedge additional electricity use.