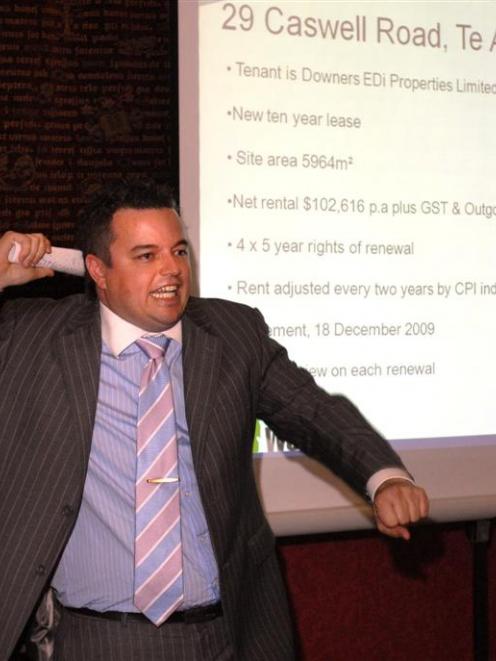 Colliers International national auction manager John Bowring appeals to investors at the Dunedin Railway Station yesterday to make bids on a commercial pro-perty in Te Anau - which sold for $1.137 million after 36 bids. Photo by Gregor Richardson.
A tranche of commercial properties around the South Island has gone under the hammer in Dunedin, with all nine selling for a total $5.7 million.

Colliers International, which held the South Island auction in the Dunedin Railway Station yesterday, also has seven properties for auction in Taupo today.

The total 16 properties are owned by Australian dual-listed infrastructure company Downer EDI Works Ltd, which was selling them with 10-year lease-back agreements.

Earlier this year, Downer raised $150 million in a New Zealand bond issue and proceeds from the sale are to be reinvested in the company.

The top sale was the Invercargill property, for $1.75 million.

Colliers national director of metro and industrial Charles Cooper said interest in the auction was high, with many South Islanders in the market because of the high profile of the Downer brand.

He said the nine sales, totalling $5.7 million with yields ranging from 8.3% to 10.05%, reflected the "depth and interest" in the market.

Bids close today for Downer's new $3 million Dunedin office in Green Island, which has an annual rent of almost $300,000.