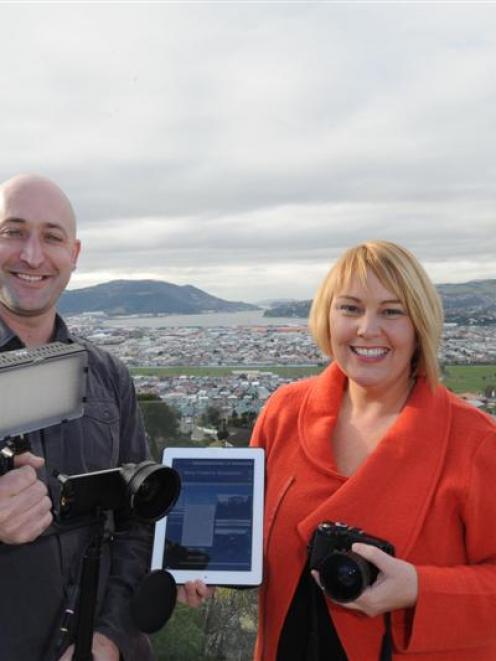 Kyle and Tania Elmer, of Mana Property Management, with an i-Phone video rig which they use for tours and inspections. Photo by Linda Robertson.
From the outside, the jobs of golf professional at the home of the Ryder Cup and property manager in Dunedin might not appear to have much in common.

But as Kyle Elmer, of Mana Property Management, points out, both jobs involve dealing with people.

Mr Elmer and his wife, Tania, share a passion for both property and people, and their business philosophy is all about quality, rather than volume.

Rather than being the biggest, they wanted to be the best, they said.

They manage more than 200 properties and have about 20 tenancies of their own, running the business from an office at their home.

Three full-time staff were employed and the telephone rang "fairly constantly" during what had become a seven-day operation.

"It just does come down to passion. When you get really busy, when you're passionate about it, you run on adrenaline and you just get it done," Mrs Elmer said.

Their life is a far cry to what it was before 2003, the year they moved back to New Zealand, but they love their Kiwi lifestyle.

Mrs Elmer said her husband "just took to being a Kiwi so easily". He loved sport, people and the outdoors, along with Speight's beer, Jimmy's Pies and Central Otago pinot noir.

Born in North London, Mr Elmer has a background in the building industry and the golf trade. He qualified as a golf professional, specialising in retail and teaching, and worked his way up to be head coach at Verulam Golf Club, in Hertfordshire, the home of the Ryder Cup.

He met his future wife when she was working in the UK as a management accountant, and the couple married in 1993.

Originally from Dunedin, Mrs Elmer's interest in property stemmed from her parents, who were "really into property", not so much renting out, but renovating and improving houses before moving on to the next one.

It was while they were living in the UK that they decided they wanted to get into property investing and started buying properties in Dunedin.

There was a property manager looking after one of the properties and they were disappointed with how it was being managed. So when they moved back to New Zealand to live, they decided if they were going to get into property management, then they could not do "what the norm was", which was to manage quantity, not quality.

Their point of difference was that they only managed above average quality properties, or properties where owners committed to bringing them up to such a level, they said.

Over the years, more management contracts had been turned away than taken on due to the company's high standard.

Where an owner lost the commitment to quality, they had "no hesitation" in parting company.

Challenges included "having a lot of balls in the air at once", Mrs Elmer said, while Mr Elmer said the biggest thing was being "piggy in the middle".

The couple had invested in technology to improve their business and leave for Florida this month for training with an i-Phone video rig. The benefits of such technology for tours and inspections were "just awesome", Mrs Elmer said.

"If you get a passion for something, you just want to be fully immersed," Mrs Elmer said.

Mrs Elmer enjoyed doing business in the city, saying they were dealing with "down-to-earth southern people".

"When you go overseas, you miss that. Kiwis say what they think, do what they say," she said.

Describing herself as a workaholic, Mrs Elmer joked that "retirement was mentioned but I don't think it'll ever happen".

"That's just us. People know us; they know that's just what we're like."