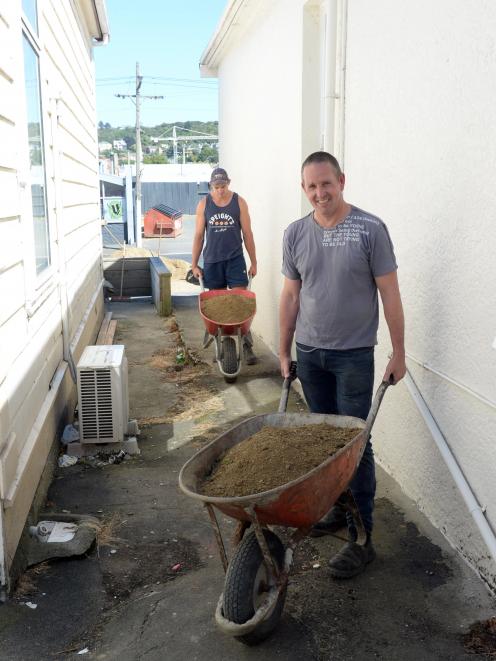 Property owner Phil Seaton (front) and Steve Green wheelbarrow loads of fill at Mr Seaton's property in Castle St this week. Mr Seaton, who owns several student flats, says students are increasingly looking for well-maintained, clean and insulated flats.
Dunedin's landlords are taking advantage of the school holidays to prepare for the arrival of next year's tenants.North Dunedin's student area is a hive of activity as property owners and landlords prepare new and existing properties for summer school and returning students.

Property owner Phil Seaton was tidying up his flat in Clyde St and taking care of some repairs earlier this week.

"Just giving it a wee bit of a tidy-up doing a bit of concreting on the paths and filling in a few other bits and pieces.''

The quality of flats was becoming more and more important for both landlords and the students, Mr Seaton said.

"They want them a bit tidier now and they're all asking for insulation so we're pulling wall linings off and replacing the Batts.''

Mr Seaton said he owned several flats so there was always work needing to be done on them and this time of year was the best time to do it.

Other property owners took advantage of the tertiary summer break to completely rebuild. 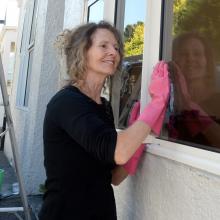 Work on Clive Hewitson's new six-bedroom fully furnished unit in Dundas St started earlier this month and he expected it to be completed by the second week of February.

"It could have been earlier than that, but second week of February will give me a week up my sleeve.''

Generally there had been an increase in the quality of Dunedin's student accommodation in the past 10 years, but there had always been landlords who put a lot of work and effort into their flats, Mr Hewitson said.

"The standard has certainly got better in the last 10 years but most landlords have always made sure the flats were organised, well run, clean and tidy.''

University of Otago summer school starts on January 8 and first semester on February 26.

Whether 'most' have is subjective related to local knowledge over 30 years, and whether you lived in Coro Terraced Housing, Dundas St.