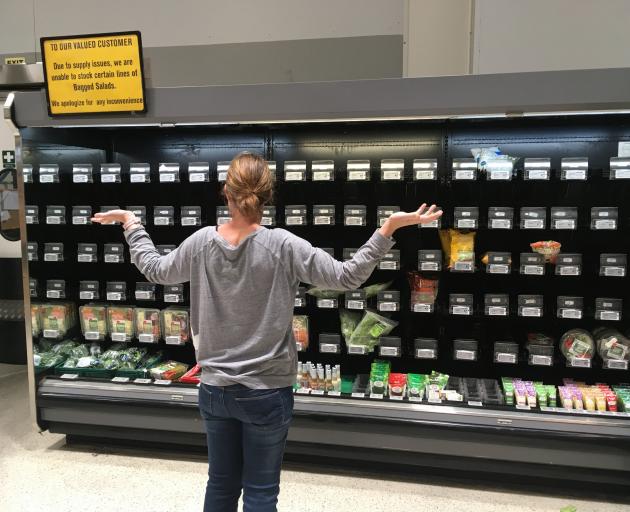 Spinach was a base ingredient for many of its salad mixes and was also a popular ingredient on its own.

"We’re working closely with our supply partners and are expecting supply to be back to normal by the weekend."

And it's not just Countdown affected. A sign displayed in the produce section of Pak’nSave in South Dunedin on Monday read, "Due to supply issues, we are unable to stock certain lines of bagged salads. Sorry for the inconvenience".

Foodstuffs New Zealand head of corporate affairs Antoinette Laird said the shortage of bagged salads was due to a "perfect storm" of supply issues.

Dunedin had experienced "perfect salad-eating weather" at the weekend and this, combined with a change in alert levels, resulted in a "bigger-than-usual" demand for salad bags.

"The usual Monday morning delivery was accidentally misdirected to another store, an unfortunate and rare error, but it does happen."

The issue had been resolved and the supermarket was stocked with bagged salads yesterday, she said.

He had enough spinach to meet the current demand from his clients, including Kaan’s Catering Supplies.

Demand for his produce was down in spring and summer due to the effect of Covid-19 but had "kicked off again" when students began returning to Dunedin, he said.

"Now we are back to Alert Level 2, things have slowed down a wee bit again — it’s a bit hit and miss at the moment."

The biggest issue in recent months had been his produce growing faster than he could sell it.

Consequently, a glut of lettuce was being given to a farmer to feed their stock.

The move was necessary so he had room in the tunnel houses to plant seedlings to ensure there would be enough supply to meet demand in about a month.

When the days got shorter and growth slowed, he could struggle to meet demand.

"I’ve never been able to get it right in the nine years I’ve been here. The only thing I can guarantee is if I have a shipload, no-one wants it and if I’ve got nothing, everyone wants it."