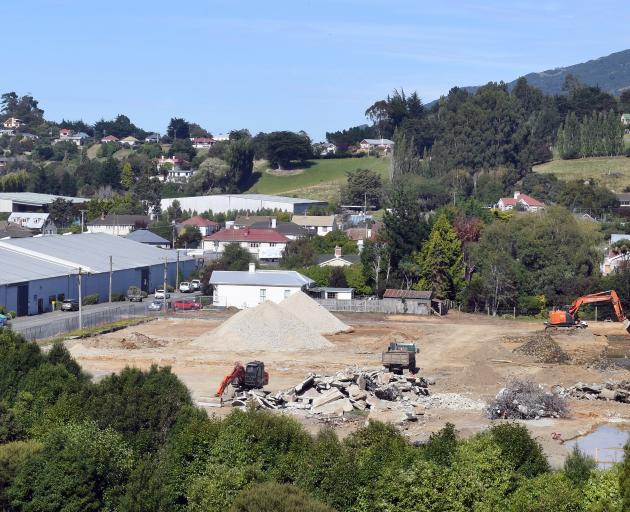 Diggers clear the site for a new warehouse for Hilton Haulage at Sawyers Bay yesterday. PHOTO: STEPHEN JAQUIERY
A warehouse that stored ammonium nitrate at Sawyers Bay has been demolished to make way for a $10.1million food logistics centre.

An investment syndicate has raised 90% of its funding target to build the facility for transport company Hilton Haulage.

The last of the explosive material was removed from the site to Macraes gold mine late last year.

An explosion in a Beirut port that killed 200 people and injured thousands more in August had sparked global concerns about ammonium nitrate storage.

Construction of a 7700sq m warehouse at Sawyers Bay was expected to begin in April.

Quarry Capital Ltd managing director David Kitson said about $900,000 had been raised towards an investment scheme for the development.

"We are not far away from having this full," Mr Kitson said.

The logistics facility would be one of the largest in the region, he said.

Hilton Haulage had leased the site at 17 Duke St for about three years and then acquired it.

A syndicate managed by Quarry Capital would buy the 1.1ha site and lease it back to Hilton Haulage in a 12-year agreement.

"The world is getting to know that Hilton [Haulage] is getting into Otago and Southland," Mr Kitson said.

Quarry Capital, a licensed syndicator, is offering 404 partnership shares of $25,000 each to wholesale investors.

The firm is forecasting a 4% per annum pre-tax cash distribution during construction.

Finance to pay distributions to investors during construction had been built into Hilton Haulage’s project cost, he said.

The scheme forecast 7% annual pre-tax distributions from completion, which was expected in October.

Mr Kitson said the syndicate needed to be fully subscribed before construction could begin.

"We are using investors’ money during construction and when it’s complete we will draw down bank money to pay for the balance."

A construction contract was under negotiation.

In 2017, the company, formerly Taurus Group, formed a capital-raising syndicate to buy the Tuapeka Gold Print site in Fairfield.

Hilton Haulage started in the 1960s in Timaru and is 50% owned by Ngai Tahu.

The business operates from 17 sites in New Zealand and employs more than 400 people.

“We note that this development will be one of the largest facilities in the region and to the highest international standard, which we welcome," Mr Christie said.

“The implication for Dunedin and the Otago and Southland regions is significant for the supply lines for both imports and exports, and we expect this type of development will be well utilised.”