Waste not is Victoria's secret 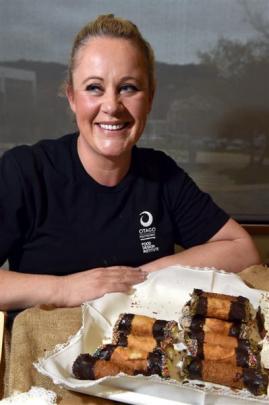 Victoria Madison, from the Revival Food Company, with some of her creations at Otago Polytechnic. Photo by Gregor Richardson

So does Victoria Madison.

The Otago Polytechnic student, who is close to completing a bachelor of culinary arts degree, is turning byproducts from beer and chocolate-making processes into food and beverages.

Ms Madison was concerned by the ''enormous'' amounts of food waste and thought there had to be a better way of dealing with it than simply discarding it.

She has been collecting the spent grain left over from the brewing process at Dunedin artisan brewery Steamer Basin, drying it and producing flour.

Likening it to baking with a wholemeal flour, Ms Madison said it was ''fantastic'' to use.

''Every time you cook with it, it does something slightly different. It depends on what they are brewing ... it takes on quite a life of its own.''

She also took leftover husks from cocoa beans from Ocho Chocolate, ground them up and turned them into a meal which she used as a cocoa replacement.

While it was still very early days for her Revival Food Company, Ms Madison was applying for a stall at the Otago Farmers Market.

She produced a small range of products, including lavosh - a thin, crunchy Middle Eastern bread - as well as cakes and other baked goods and a chocolate-based tea.

Such creative cooking meant at times the birds in her backyard had been very well fed, while her children had also taken some ''quite interesting'' lunches to school, she said, laughing.

She was grateful for the ''enormous amount of support'' from the Food Design Institute at the polytechnic.

She was setting up a commercial kitchen but, in the meantime, she was able to use the polytechnic kitchen.

Suppliers had also been supportive and she hoped others would take inspiration from what she was doing.

The Love Food, Hate Waste movement was ''slowly trickling'' into New Zealand and it was a philosophy Ms Madison liked to live by.

There was always going to be a degree of waste with food and giving byproducts a ''second life'' was fun, she said.

Once she completed her degree in mid-November, the mother-of-two planned to ''push myself out there in all directions''.

Even if she was not successful in getting into the farmers market, she intended to ''pop up somewhere''.

She was unaware of any similar venture and she believed there were ''endless opportunities'', given the huge volumes of byproducts available.