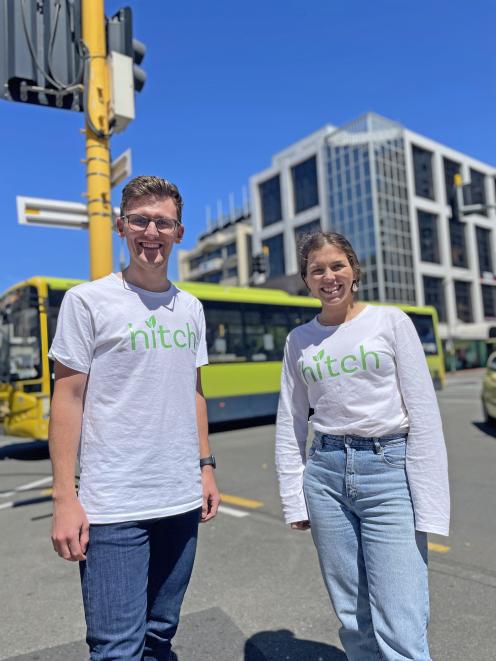 Todd Foster, of Wellington, and Claudia Graves, of Dunedin, have co-founded a new commuter service, Hitch. PHOTO: SUPPLIED
There is no need to stick your thumb out anymore.

For 12 months, she and Wellington-based co-founder Todd Foster have been developing a platform called Hitch aimed at providing a new option to commuters and travellers.

Ms Graves studied for a bachelor of commerce degree, majoring in marketing, accounting and nutrition, at the University of Otago Business School.

In 2018, she competed in an international business case competition in the United States with four others from New Zealand.

Since graduating, she has worked at accountancy firm PricewaterhouseCoopers as a consultant.

Initially, Ms Graves and Mr Foster had been working on Hitch part time outside their regular work hours, but investment and being accepted into a business accelerator programme meant they had been able to work on it full time since June.

The new platform matches people who are wanting to travel with those who are willing to take passengers.

Last month, Hitch launched into the Wellington commuter market and on Wednesday night it expanded into the South Island.

So far, it had focused on the central Wellington commuter, but in the South Island it would concentrate on intercity travel, Ms Graves said.

With most people still choosing to drive to work or travel around the country using conventional methods, such as flying, driving or on a bus, she admitted that convincing people to switch to Hitch’s system was going to take a while.

‘‘We are trying to get people to change their behaviours and the current car culture is deeply embedded in society so it will take some people longer than others,’’ she said.

One of the aims of the business was to try to take as many cars off the road as possible and make us of the empty seats in cars.

‘‘If we can get people to think differently about how to use their vehicles and share their cars, we can make a huge impact,’’ she said.

Ms Graves believed from their market research, which they had conducted during development, there was potential, particularly in the lower South Island, as people moved around over summer.

It had been hoped to expand Hitch into Auckland this year but the Covid-19 outbreak in the city had delayed those plans.

Is this connected with the car rental firm 'Hitch' in NZ?