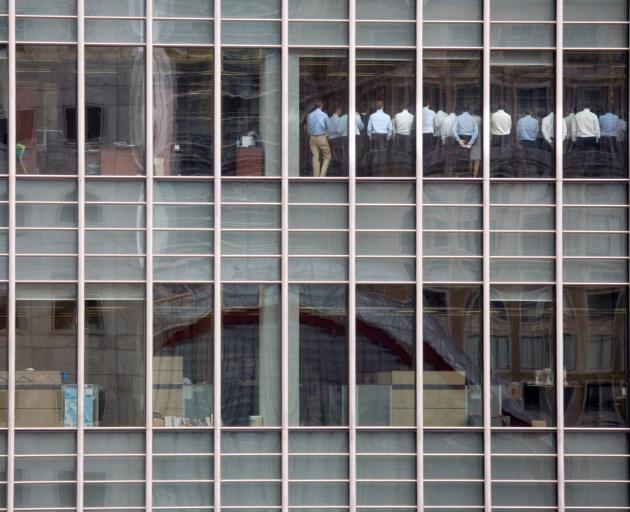 Bankers attend an emergency meeting at the London office of Lehman Brothers on September 11, 2008. They learned things were not going well. PHOTO: REUTERS
The 10-year anniversary of the Lehman Brothers bankruptcy has been met with a lot of reflection about how things have changed since the dark days of 2008.

Craigs Investment Partners head of private wealth research Mark Lister said while progress had been made, the elephant in the room was the fact debt levels across the world were higher than they were in 2008.

"That hasn't been an issue in recent years, as borrowing costs have fallen to record lows, economic growth has been steady and things have been generally stable."

However, the debt burden could still leave the global financial world in a precarious position when the winds inevitably changed, he said.

In 2008, the United States housing market was central to many of the problems, along with low quality lending and bankers who packaged those loans together to mask their true risks.

While things had changed, the underlying problem remained.

The US had come out the other side in good shape, the housing market was not overheated and lending standards were much better.

Conversely, at 90% of gross domestic product (GDP), government debt was much higher and the expansionary fiscal policies of US President Donald Trump's administration were adding to the problem.

The story was similar in Europe, where government debt levels were equally high, Mr Lister said.

Japan was worse, although it was somewhat of an anomaly given its exceptionally strong domestic savings base.

In China, the corporate sector was heavily indebted at 207% of GDP, up substantially from 160% five years ago.

Much of China's corporate debt rested with state-owned enterprises, which might afford China the ability to make decisions more swiftly.

The approach the president of China, Xi Jinping, chose to take when dealing with the country's high debt could be crucial for countries with significant links to China, Mr Lister said.

"That happens to be this part of the world. China is the biggest export market for both New Zealand and Australia.

"At the same time, we are not so squeaky clean when it comes to debt levels."

Government debt was low, particularly in New Zealand at less than 30% of GDP. New Zealand looked better than just about everywhere else on that measure and it gave some options, he said.

Should the economy run into trouble, New Zealand had the ability to dip into the war chest as the John Key National government had done in the wake of the global financial crisis and Christchurch earthquakes a decade ago.

When household debt was considered, the picture became a lot uglier, he said. As a proportion of GDP, New Zealand's mortgage and consumer debt added up to more than 90%.

Not only did that put New Zealand ahead of the US and the United Kingdom, but Kiwi households were more indebted than those in Spain, Greece and Italy, Mr Lister said.

The Reserve Bank talked about household debt as a proportion of disposable income. Now, the ratio was at 166%, above 2008 levels and well up from 100% 20 years ago.

Authorities had a lot of firepower during the Lehman period. New Zealand's official cash rate was 8.25%, the US equivalent was 5.25% and Australia's was 7.25%.

"That left plenty of room to slash interest rates and soften the blow to borrowers. Today, the world doesn't have quite the same sort of ammunition."