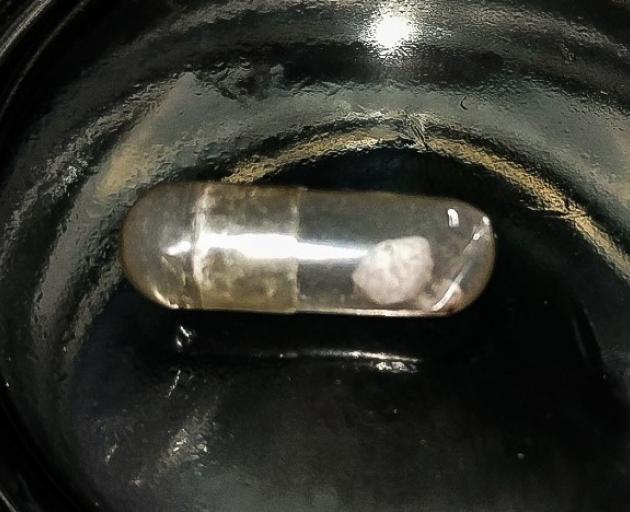 The pills are medium sized clear capsules containing a chalky white powder that clumps together. Photo: KnowYourStuffNZ
Drug testers KnowYourStuff have confirmed cathinone C86, from the "bath salts" family of drugs, has been found in Dunedin - and are warning people against taking it.

Drug testing was carried out ahead of Saturday's Hyde St Party - the second time the Otago University Students' Association has organised for testing at a student event this year.

Students or other people in the community could bring their drugs in and determine what was in them.

But exactly what was in C86 was unknown, a statement from the drug testing organisation said.

"C86 has not, to our knowledge, been seen before and there is no information about safety, dosage, risks and interactions with other drugs. We recommend avoiding this," a statement from the organisation said.

According to KnowYourStuff, cathinone C86 can produce short-lived euphoria followed by overstimulation "including a racing heart, high blood pressure, anxiety, overheating, and inability to sleep for up to 36 hours".

"Cathinones have been associated with deaths overseas and hospitalisation in New Zealand. Because of the high redose compulsion and low active dose, it is very easy to overdose."

The cathinone pills found in Dunedin were in "medium-sized clear capsules containing a chalky white powder that clumps together".

Originally the substance found was thought to be n-ethylpentylone, and the two drugs were fairly similar in structure, the information from KnowYourStuff said.

There have been number of deaths overseas due to overdoses of n-ethylpentylone, by people who thought they were taking MDMA, and last year in Christchurch the drug was responsible for nine people being admitted to hospital.

During O-Week, testers found one in five drugs were not what the person thought they were.

If people did want to take cathinone C86, they should make sure they did not snort or inject it, or mix it with other substances - including alcohol.

They also should not take it alone, the statement said.

Amphetamine is Class B, high risk.