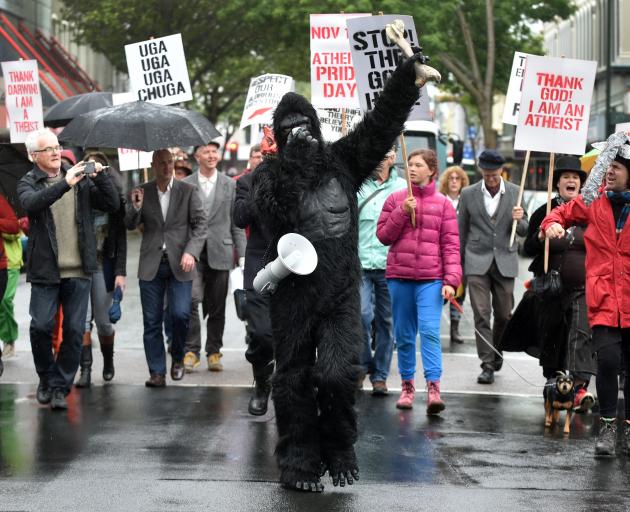 Waiheke Island artist Dr Craig Hilton, who was dressed as his alter-ego Sahelanthropus the ape, led about 50 people wielding placards from the School of Dentistry to the steps of St Paul's Cathedral yesterday.

Marcher Mandy Mayhem made ape-like calls, with low-pitched hoots transitioning into a series of quicker, higher-pitched noises, as she walked along George St holding the placard reading ''Thank God! I am an atheist''.

As Sahelanthropus led the march, he roared chants through a megaphone, including ''Uga uga uga chuga'' and ''free bananas for primates of all beliefs''.

Shoppers and retailers stood with stunned smiles as they watched the primal procession, some accepting free bananas from marchers.

On the steps, Sahelanthropus, armed with a bone and a microphone, gave a sermon about the genealogy of mankind, with the audience interjecting with ''different schools of thought''.

After the march ended, the Dean of St Paul's Cathedral, the Very Rev Dr Trevor James, met Dr Hilton in the cathedral entrance.

Dr James joked about how primate was a title bestowed on some archbishops in certain Christian churches.

''It's good to have you here ... a conversation between science and faith is not a bad idea,'' Dr James said when welcoming Dr Hilton.

Dr Hilton said the performance art was funded by Creative New Zealand and aimed to celebrate the proud atheist, someone who was not obnoxious and lived in harmony with those people who believed in a god.

Am I my keeper's brother?