Irene Mosley says the public will be consulted on the two sites. Photo: Peter McIntosh
The two possible locations for a new aquatic facility in Mosgiel were revealed yesterday, along with a concession that "neither site is perfect''.

The first site option (site A) covered some of the existing Mosgiel Pool site, Mosgiel Caravan Park and Memorial Park near Gordon Rd.

The second site (site B) is on land between the rose garden at the Mosgiel Memorial Gardens and Reid Ave.

An artist's impression of a proposed new aquatic facility at the existing Mosgiel Pool site in Gordon Rd near Silver Stream (Option A). Image: supplied

Some trees and playground equipment would need to be removed if the second site was chosen for the facility.

"There is not much green space in Mosgiel and that is one concern some people do have,'' Mrs Mosley said.

If the build went ahead on site A, "green sports space'' would be lost.

If the build went ahead on site B, "green garden space'' would be lost.

Mrs Mosley said the public would be consulted on the two sites.

"We have decided we need to go back to the community and explain there is no perfect site ... we just want to get it right.''

An artist's impression of the proposed site at Mosgiel Memorial Garden near Reid Ave (Option B). Image: supplied
The Otago Regional Council had raised some concerns about site A being near the floodbank but would support it if the issues could be mitigated, she said.

ORC engineering, hazards and science director Dr Gavin Palmer said a geotechnical assessment was needed to reveal if earthworks could weaken the bank under flood conditions.

At yesterday's meeting, Mrs Mosley listed the reasons for public consultation, including. -

Site A would impact the camping ground, which was under Dunedin City Council lease until 2023.

Site A would result in the loss of some space at Memorial Park to play football and cricket.

Site A would result in no pool being available during the building phase, which was expected to last about 18 months.

Site B would affect some of the garden space in the Mosgiel Memorial Gardens.

Site B had the potential to be developed into the stadium area.

A group called Save Memorial Gardens has vowed to oppose site B. 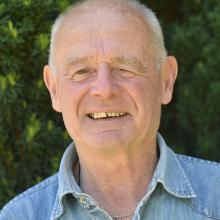 Mosgiel resident Peter Sim said he would oppose site B. He lives in Gordon Rd and his house backs on to the memorial gardens.

Green space was "at a premium'' in Mosgiel and the DCC was "nibbling away'' at it.

"It's time it bloody well stopped.''

He supported the facility being built at site A.

Mosgiel Caravan Park leasee Paul Brooks said he was unaware some of the caravan park he owned a lease for until 2023 was part of a proposed site.

Council staff had arranged to meet him at the caravan park tomorrow.

When he was told by the ODT about a proposed footprint encroaching on the caravan park, he was happy, as long as the caravan park was relocated, possibly nearer Reid Ave.

"I don't mind where it goes. I fully back the pool, because it will be a great thing for Mosgiel and if it means that my campsite is interrupted, then I'm sure we can work around it. We need a pool.''

It needs to be site A, not B. The playground in the gardens is one of the biggest in Dunedin, and should be left with room to grow further - like was originally planned (what happened to that plan, by the way?).

Reinforce the floodbank if need be, and if a playing field is going to be lost, the caravan park could use the rest/some of that space too - or even further extend north along the bank?

But yeah, if these are the only two options, it needs to be A.