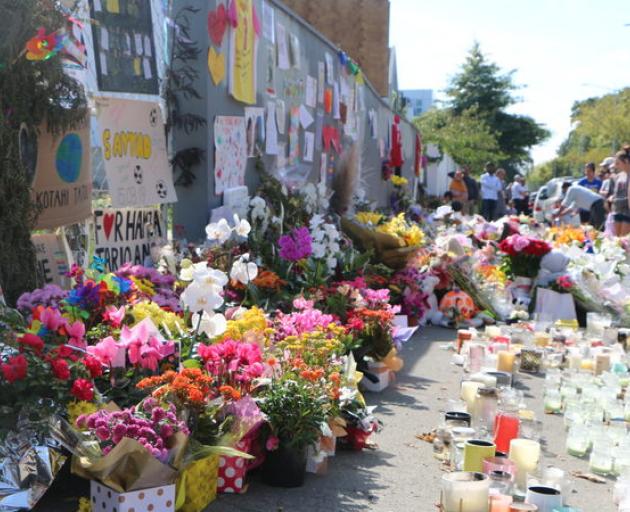 Tributes and flowers left outside Al Noor Mosque in Christchurch after the attacks. Photo: RNZ
Copies of a manifesto penned by the accused Christchurch gunman are being sold online on an instant messaging app.

A neo-Nazi in Ukraine is distributing the writings through a channel on an online messaging app set up two days after March 15 attacks on two mosques in city in which 51 people died.

The channel - which has more than 1000 subscribers - appears to be run by an administrator distributing the writings translated into Ukrainian.

It glorifies the attacks and shares photos of men posing with hardcover copies of the manifesto translated into Ukranian as well as discussions about how to obtain the book.

In June, the channel's administrator wrote to a subscriber saying he wanted a hardback version of the accused's manifesto for his "collection".

"Then we thought about this idea, I found publishers who agreed to print it, made layouts and some other works in preparation for printing.

"And today we already have the first Great Replacement samplers. There are some nuances, but they will be corrected in the bulk of the print run."

He thanked a subscriber for the idea and went on to write he did not make money from the scheme and others could make their own copies if they wished.

"I do not make money on this ... take the layout and print on your own, not a problem.

"The idea is to give paper versions to everyone in a row, on birthdays, wedding anniversaries and baptisms of children."

In the months following, a series of photos are posted which show subscribers posing with hardback copies of the manifesto.

In one photo, a hardback copy of the manifesto is positioned on a table next to a copy of Adolf Hitler's Mein Kampf and other neo-Nazi writings.

The administrator has also posted the South Auckland business address of the accused gunman's lawyers, writing: "Where letters can be sent".

The accused shooter's manifesto was quickly distributed on internet forum 8chan after the attacks and has since been classified as objectionable by the Chief Censor.

They said they would stop this/ looks like it

Nazis are temporary, but well connected. The Azov fascists operate in Ukraine.

If you mean NZ government, it has no jurisdiction over foreign territories.