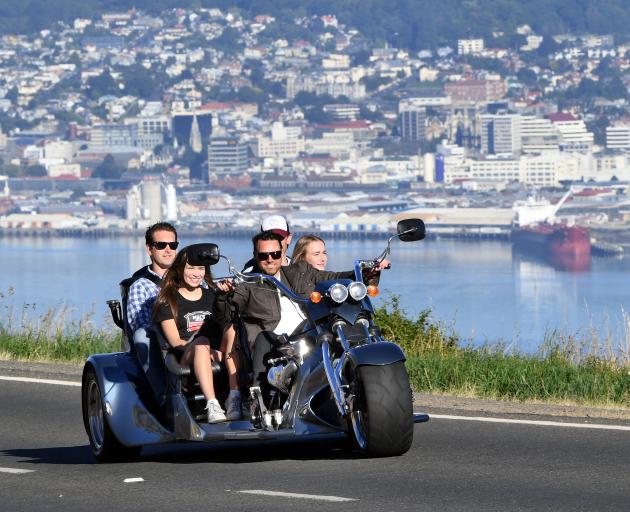 The 350cu in V8 Chevrolet-powered trike will  cruise along the roads of Otago Peninsula, Brighton and the inner city on a series of tours in which visitors are guaranteed to feel the wind in their hair.

Trike owner-operator Andrew Sim said there were four other five-seater trikes in New Zealand but  it would be the first such vehicle to operate in  Dunedin.

The vehicle  is registered as a car, which means occupants do not have to wear a safety helmet. It was built  by Christchurch trike maker James D.

Mr Sim said the idea for the machine came about after he finished a business degree at the University of Otago.

The venture fuses the Speight’s tour guide’s two passions - Dunedin and showing it off to tourists.

"I really enjoy taking tours and showing people what Dunedin has to offer."

While he had only had the trike for a week, it had already attracted plenty of attention when it was  parked in the Octagon.

The trike  was "very easy to drive" and came complete with heated bucket seats and USB ports for technology-minded passengers.

The  trike would offer fun but safe tours.

Trike passenger Ava  (19) said travelling on the vehicle was like being on a "scenic rollercoaster".

Mr Sim would offer tours doing anything "within the law" and he expected clients ranging from the young at heart to children and  their parents.

Tours would begin once signwriting was completed this week, he said.

Nice one, I should register my bike as a car, I don't want to wear a helmet either.