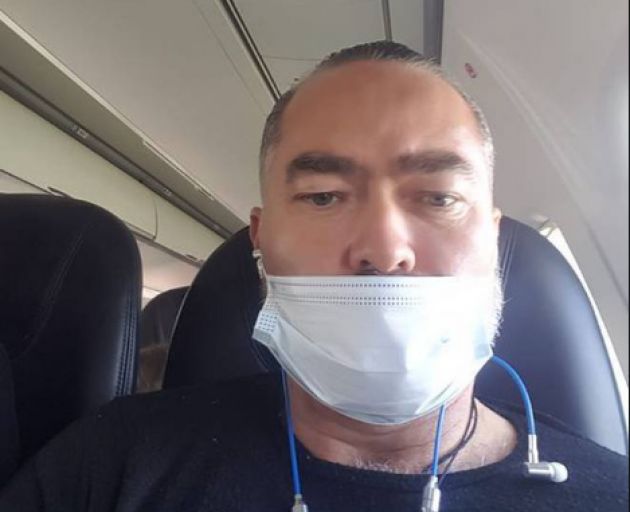 Te Kahika took to social media to confirm he was reluctant to use a mask to cover his nose during the flight.

He claimed that covering the nose "feels wrong".

During the flight he was challenged by a stewardess who told him he needed to wear the mask correctly.

The stewardess asked him three times to wear the mask properly and he refused.

When the flight landed in Dunedin a policeman and an Air NZ manager were there to meet him.

Te Kahika Jr said he challenged the stewardess, police and the Air NZ manager about the legal basis for wearing a mask, saying it was not in Covid-19 legislation.

The Covid-19 legislation does not refer to masks, but the Civil Aviation Act requires passengers comply with orders from the pilot-in-command.

Wearing masks is mandatory on public transport and flights in and out of Auckland while the city is in Level 2, though Air New Zealand has made them mandatory on all flights until the whole country is in Level 1.

The Ministry of Health says masks and face coverings can reduce the risk of people who have Covid-19 spreading the virus to others through infectious droplets.

The World Health Organisation says that while the prolonged use of medical masks can be uncomfortable, it does not lead to oxyen deficiency or CO2 intoxication. Masks should not be worn when exercising, the WHO says.

Looks like Billy has been taking the advice offered to him by the good people behind Trump and Brexit which is to never deal with facts when playing on emotions and fear will have a greater impact on the gullible.

Why would anyone support or vote for someone who refuses to protect their fellow NZers? Or to obey the instructions of a crew on a commercial airline? Inconsiderate, anti-social and dangerous behaviour that puts others at risk. Hope he sinks into oblivion after the election.

What an idiot. And he's the leader of one of the nut case political parties. Air NZ should refuse to carry him.

And this is someone who wants to be respected and wants to be voted for, just another idiot in the world just what we need we certainly have enough already if you dont care about yourself that is your choice but at least have the decency to care for others

Why was he not arrested? A selfish poiticican trying to get publicity for his own benefit.

I'm sure they had a nice conversation but he needs to be held accountable for all the damage he is doing and the false nonsense he is spreading.

The leader of the labor party continually breaks social distancing rules yet her followers are always silent when this happens, perhaps they should rebrand as the hypocrite party.

Sure, there is some debate surrounding the efficacy of masks, but even if the benefit is a marginal one, why would you not err on the side of caution? The anti-maskers are some of the most ridiculous people among us, and probably one of the worst "side effects" of covid19 is having to watch this nonsense.

Just ban him from going on the airline for life.

He did have the mask over his mouth, but he did not have it over his nose, he said that he found his intake breathing was difficult with the mask covering his nose as its suppose to be your intake area to get air into one's lungs.
The sealing of all these masks around their outer edges, is useless, plus as soon as they become wet from your exhausted hot air, they are sure as hell, just become totally useless as far as protecting anyone from getting a infection.
Coronavirus is more likely to get into your facial area by way of the soft tissue of one's eyes, the Chinese and South Koran doctors found this to be the case, early in the world lock-down period.