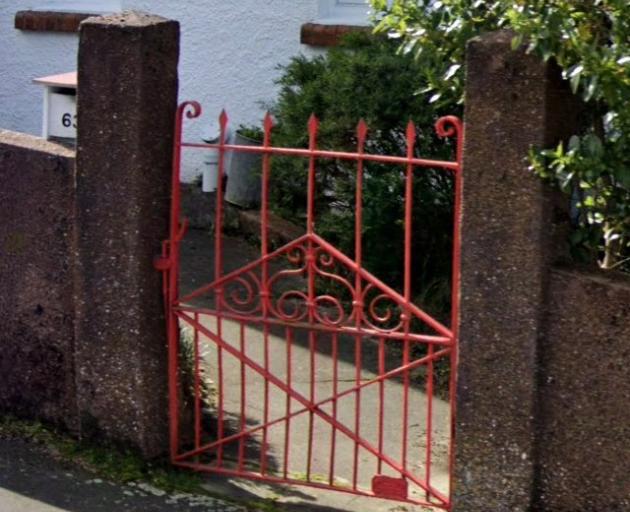 This image shows Ms Esplin’s gate before it was stolen. PHOTO: GOOGLE STREET VIEW
Some people are challenged by gatekeepers, but it has been brazen gate stealers who have raised the ire of Pacific St, Dunedin, residents. 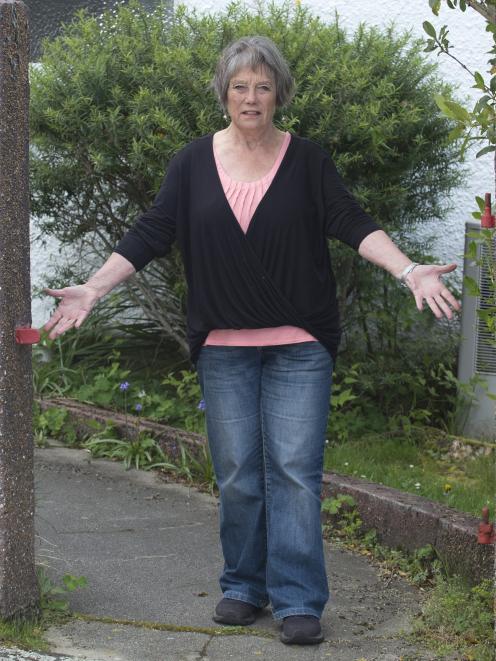 Pacific St, Dunedin, resident Phyll Esplin ponders the theft of her hefty wrought-iron gate. PHOTO: GERARD O’BRIEN
At least three heavy metal gates have recently been stolen from the street, at least two of them on Saturday evening, probably about 8.30pm.

Phyll Esplin, a retired University of Otago teaching fellow, was "irritated" and felt violated by the theft of her at least 70-year-old bright red wrought iron gate, between 5pm and 10pm on Saturday.

"It feels a little like I’ve been intruded upon."

What hurt was not just the loss of the "very, very heavy" gate but the loss of some little things linked to it, such as the distinctive warning creak when the paperboy opened it to deliver the paper.

Also gone was protection against wandering dogs or passers-by walking into her garden.

Another neighbour, Simon Pickford, sent a warning flyer to about 70 neighbours in the street to raise awareness and urge the sharing of information with the police, after a 1.6m high green steel gate — with a replacement value of $1000 — was stolen from his nearby property also on Saturday night.

The thefts could well be linked with a vehicle heard turning in his driveway about 8.30pm, he said.

He was angry about the theft, which had had an "unsettling" effect on residents.

Householders, including from Mornington and Roslyn, had been distressed by the thefts, and it was a "sad" situation in society when such thefts were happening, he said.

Dunedin police confirmed yesterday they were investigating the three thefts, and were "aware of concerns" about them.

Police would hold those responsible to account, but "can’t do it alone", a police spokeswoman said.

Householders should consider investing in an alarm system or have sensor lights fitted, and could join or form a neighbourhood support group, she said.

Worth checking with metal recyclers.