Nine hours after it began, a coal train protest at the Dunedin Railway Station ended at 4.30pm today with protesters convinced they had created ‘‘a positive moment of change’’.

Protesters said the railway station--from which the daily northbound coal train left, and the happy coincidence of the presence of a large group of people attending a nearby Saturday Otago Farmers Market had created ‘‘a perfect stage for the action’’. 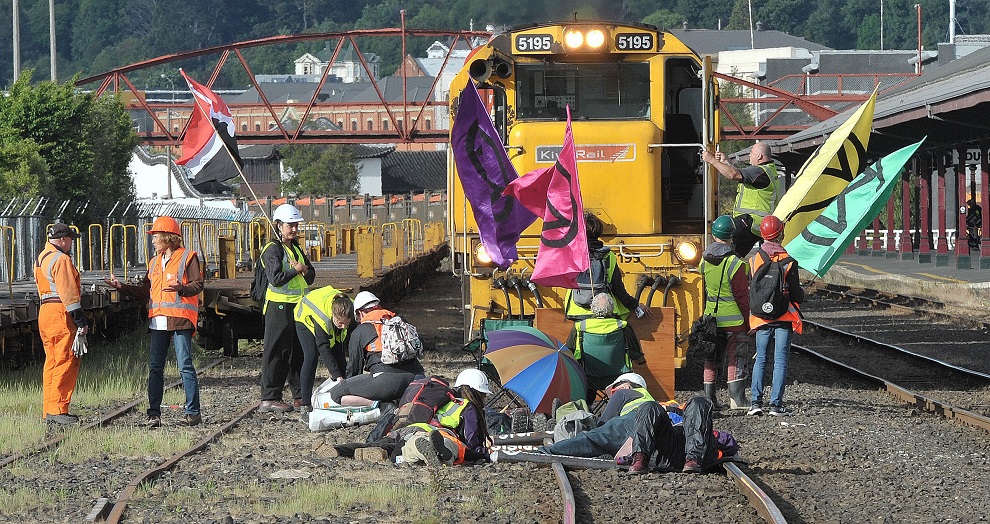 Several of the protesters have locked themselves to the train tracks at Dunedin Railway Station. Photo: Gregor Richardson

Some people did not like disruption, and she understood that was the case, but the protesters had received positive support from many people attending the nearby farmers market.

‘‘I feel very positive about the future,’’ she said.

She also felt positive about protest action to protect Papatuanuku (Earth mother), and how the protest had unfolded today.

This was a day in which greater focus had been put on the link between the burning of coal, a fossil fuel, and industrial agriculture, and the output of a Fonterra agricultural plant.

‘‘Change yes, but also celebration,’’ she said about the mood of the day, and the aftermath. 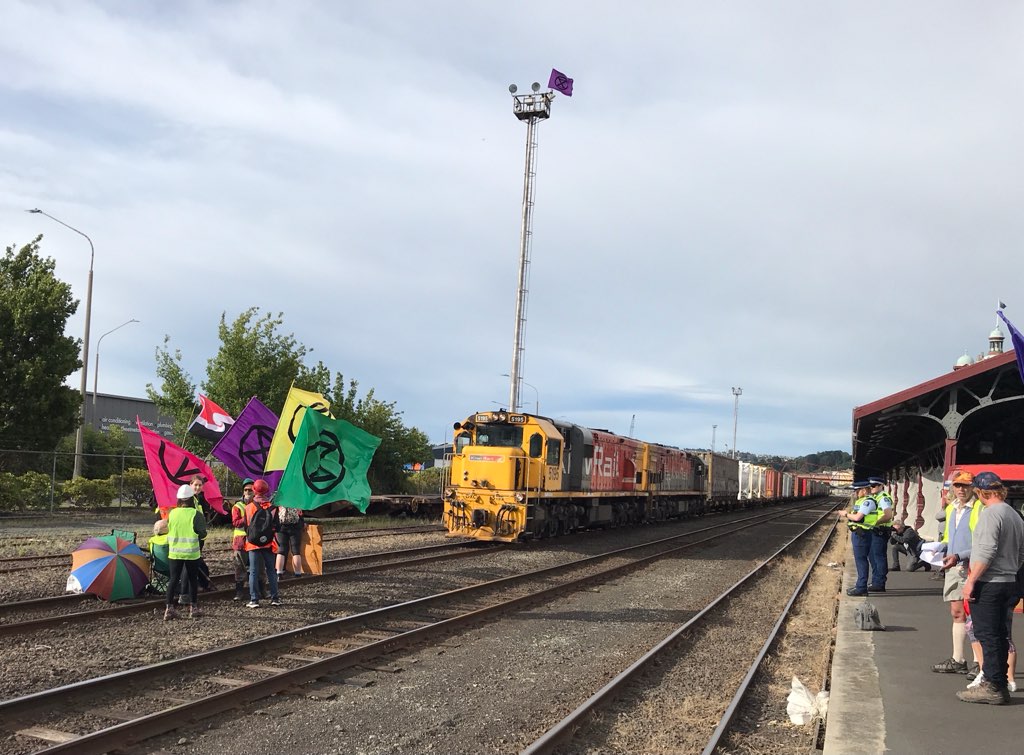 Photo: Gregor Richardson
As the protest ended peacefully, with protesters moving away, and police confirming that one person, in the protest group in front of the train, received a warning, but no one was detained beyond a few minutes, or charged.

A police spokeswoman had earlier described the mood, and dialogue between police and protesters as ‘‘pretty friendly’’.

Ric Carson, a protester helping with liaison with the police, said there was plenty to celebrate after the protest, which had gone extremely well.

He also believed that the location of the coal train and the nearby farmers market, and its potentially well-disposed clientelle, had been perfect for a protest, and that, despite limited financial resources, the protesters had made their point successfully. 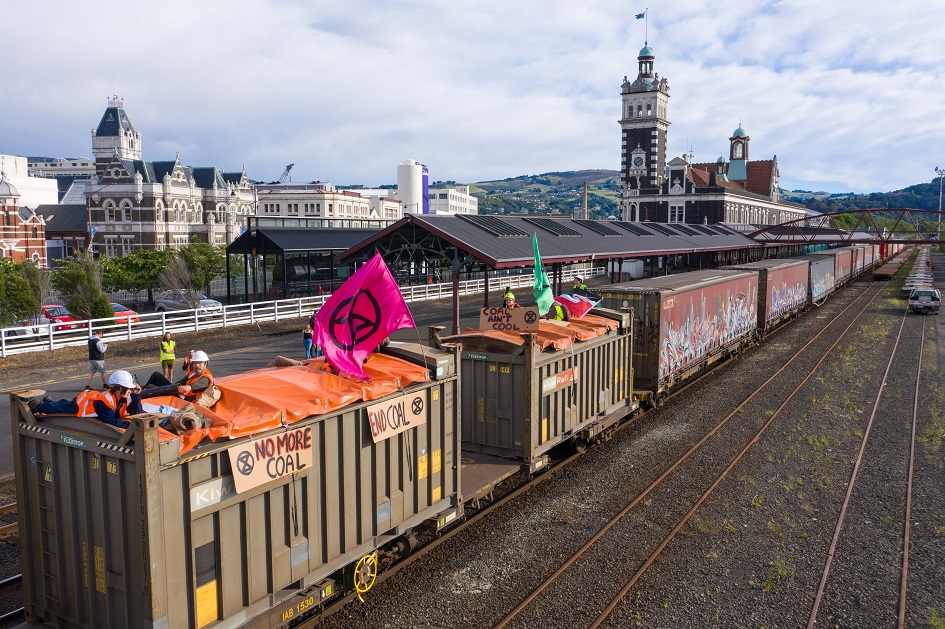 One of the protesters, 79-year-old Michael Fay, said he was "simply doing what my conscience demands".

"I’m here for these young people right here on the track beside me. It is morally unacceptable to do nothing while their future is flushed down this very [railway] line."

The Government had recently signalled change by declaring a climate emergency, and change was clearly happening through the successful awareness-raising of today's protest action, Mr Carson said.

‘‘It went very well—we’re very happy about how it went. 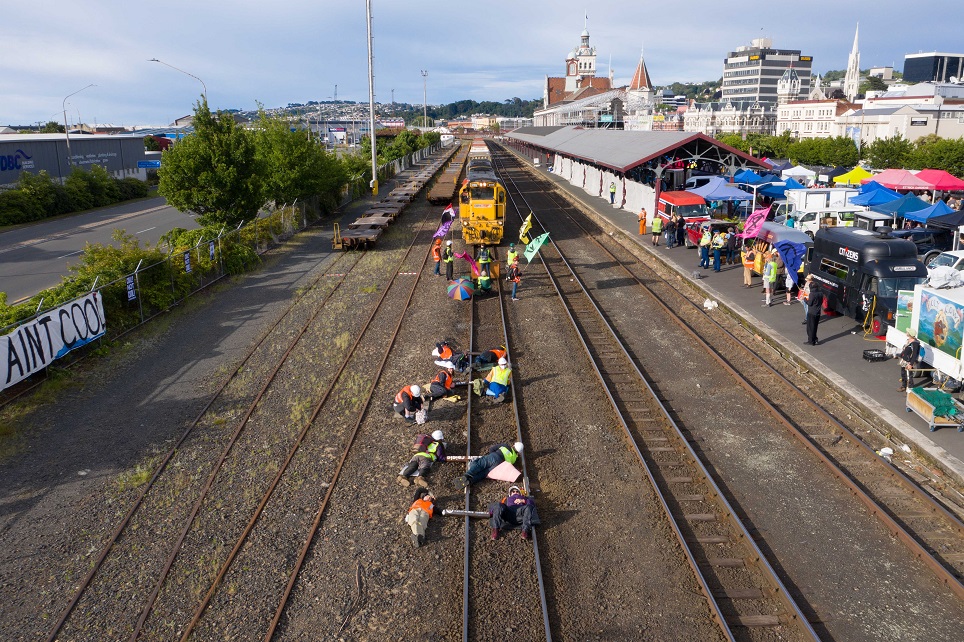 Ms Clements' views, based on one side of her heritage, ignores reality and the other half of that heritage. Sure, coal is a pollutant, just as the manufacturing process is for the tyres on her bicycle, but currently it's a cheap fuel option, a fuel used in the manufacture of milk products for her relatives (assuming she herself doesn't drink it) and a job provider for those who need to feed their families or to save up to buy the dairy farms which could replace those coal mining areas...

Yes coal is a very dirty form of energy but protesting like this is not going to achieve anything at all. If you want to get rid of the use of coal, which most of us are in favour of, then the answer is to provide some solutions. Protesting is actually a rather lazy way of trying to change something because it achieves absolutely nothing except annoy people. So instead of taking the easy way and just complaining about it do some thing about it and do the hard work of finding solutions, otherwise, the problem will never go away.

In this case the solution already exists, it just needs Fonterra to stop burning fossil fuels and make the investment.

Thank you to all the protesters taking action and helping to raise awareness on these important issues.
Our diets and agricultural production around the world are so carbon-intensive that emissions from the global food system alone would be enough to put the Paris climate goals out of reach, even if all the other major sources of emissions were closed down, research has shown. The conversion of land from natural habitats are major contributors to the ecologic and climate crisis. Other major sources of emissions from food production are artificial fertilisers; methane from livestock and livestock manure.
The World Meteorological Organization said this year is set to end about 1.2 degrees Celsius warmer than the last half of the 1800s, which scientists use as a baseline for warming caused by heat-trapping gases from the burning of coal, oil and natural gas. Most trapped heat goes into the world’s seas, and ocean temperatures now are at record levels. It also means 2020 will go down as one of the three hottest years on record.

Neither of those panned out, so now we simply say "climate change"
The amusing thing being of course, we know from the geological record the earths climate has changed DRASTICALLY throughout its history - nothing to do with man.
But yeah....let's not mention that small fact.....

“Human activities are at the root of our descent towards chaos, but that means human action can solve it.” - U.N. Secretary-General Antonio Guterres

We all best stop eating then, that'll fix it.

Agreed. It would stop the obesity epidemic and heart disease at the same time, but the supermarket millionaires would lose out, so we can't...

I could go on but the point is of course, these people have very little credit if they themselves are not following the logical ends of what they are saying. If they don't want people to use coal, they can start with themselves!!!!!!

Shame they can't get a real job. No arrests? Really? They should have to pay for the damage & disruption they caused.

You mean work Saturday as well?

Is the 79 year old brainwashed as the young climate strikers were?

Protest is not an easy thing. These are local citizens, not random nuisances to disparage.

Why are these people not being arrested?
If I sat down in the middle of George street you can be sure the boys in blue would move me on pronto.

We can expect more of this nonsense after the virtue signalling announcement by our glorious and kind leader this week.

Well it certainly highlighted the issue - so in regards to the protest not achieving anything at all then this evidences it does. I think it's great our young people (perhaps there are older ones in there too) are making an effort to make their voices heard. Makes a bloody nice change from 'noise' from the keyboard.

What if anything is the protestors ultimate aim? If it is trying to stop the conveying coal by train then that is a waste of their time, after all the consignee can always get coal delivered from some other country by ship. Oh! Silly me I forgot for a moment that they already do...

Oh my goodness, all the climate change deniers are on the loose again... If you don't want the see what is happening around the world and don't believe in scientific facts then fine, just don't. But please just move out of the way and stop spreading your ignorance and negativity when other are trying to do something.

So yet again if people challenge your views then their wrong, for every scientist you find that agrees with global warming there is one who disagrees, only the ones who push it are being funded by Billionaire's who have agendas, look at the all the facts don't just listen to what a green left media feed you.

You know nothing about how others get information. Unless opinion concurs with yours, it's of no value. Sorry, but there are too many assumptions made about other commenters based on threads.

Reply to Elderslea Outdoor Factotum on Sun, 06/12/2020 - 1:16pm
Neither do you buddy.
"You know nothing about how others get information"
Yet you state this "but there are too many assumptions made about other commenters based on threads".
You clearly don't know how assumption works do you.

Thanks to the climate hero's for putting it on the line and moving us one step closer to change before it's too late.

To all the climate deniers commenting. Hey folks it's not your fault that years ago governments and co-operate advertising told you that success and the definition of a good person was to consume was much as you can, and now they are starting to say actually that way of living is actually bad and you are bad person if you continue. You don't have to feel bad about that and push back against it because you didn't know it was bad back then.

But to resist now is not cool. It's better to say "hey look I'm just doing the best for myself and my family. I'm living in a world when consumption was promoted and still kinda is a status symbol. But I'm going start to change my ways now and I'm going to support those people that are at the front of that change, because I want my kids to speak well of me and live well without excessive pollution and environmental destruction defining their lives."

In NZ we live in a comparatively privileged, benign society so we can be complacent about the expanding crisis of this uneven world of which we are an integral part. Science has been increasingly aware of this seriousness for thirty or forty years - what has not been realised is the proliferation of active issues which have been triggered and speedily proliferating. Think of the novelty in 2006, in Dunedin two icebergs floated up from Antartica past the Peninsula, the first seen from NZ since 1932. Since then we have seen W. Coast glaciers vanish, seismic - and weather events, bush fires which have coloured NZ skies from Aus. and learned proven scientific facts of the result of disappearing Arctic, and Antarctic glaciers: warmer seas, sea level rise and thence the release of new viruses into the world. These events are reciprocal and are escalating at unexpected rates. We are at a point of extraordinary crisis. NZ is leading with climate awareness but we have to be leading with necessary actions. They also have to be extreme - at a wartime level even, and we must accept our compliance and responsibility very quickly. Congratulations to XR and world youth for leading our awareness!