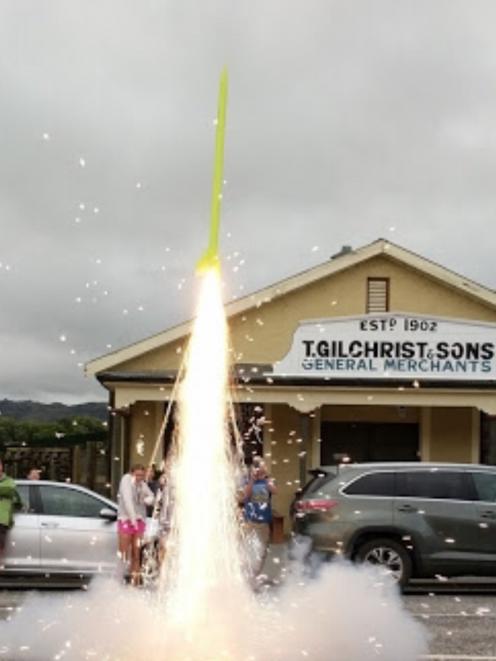 One of Alistair Broad’s rockets blasts off at Oturehua. PHOTO: SUPPLIED/ALISTAIR BROAD
The rocket enthusiast treated Oturehua Domain as his own Cape Canaveral where he launched rockets on New Year’s Eve, much to the awe of locals and visitors.

Mr Broad, who holidays in the Central Otago town, is a regular at Oturehua’s New Year’s Eve party, where his rocket launchings have become a tradition.

He sources the rocket components overseas, mainly from America, and constructs them at his home.

While they can be reused they do have a lifespan, he said.

"Probably, the average life of a rocket, or in my hands anyway, is between three to five flights before there’s an incident."

In some cases the O-ring fails, the rocket blows up or is "blown away literally in the wind".

They can also get lost in tree tops and paddocks.

However, there are always plenty of people keen to scour Oturehua for the components following a launch on New Year’s Eve.

Those who do find components are rewarded.

Mr Broad, who has had rockets for 30 years, said recovery was not always an easy task.

It is for that reason he decided to label each rocket with his phone number so it can be returned by the person who finds it.