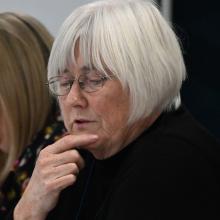 Marian Hobbs
An old conflict that ripped apart the Otago Regional Council has returned with accusations of defamatory comments and "valley politics".

It comes as a council plan for dealing with hundreds of historical farming water take permits, dating back to the gold rush, is before the Environment Court.

As the seven-week hearing began in Dunedin this week, Cr Marian Hobbs told RNZ the matter going before the court was ultimately the result of a request from her, as the former council chairwoman, to call in the plan.

That move ultimately cost her her position as chairwoman, as "valley politics" played out at the council, she said.

A group of councillors came together, voting along a particular line of what that group of particular farmers wanted, she said.

She did not name the councillors. However, Cr Gary Kelliher contacted the Otago Daily Times this week to say Cr Hobbs’ comments were "defamatory and wrong".

"It is just incredibly frustrating from my perspective that this commentary keeps appearing.

"It is totally incorrect."

It insinuated that councillors were only being led by farmers, he said, and he wanted Cr Hobbs to provide examples of where that had happened.

"I personally can’t understand why Cr Hobbs continues to think that. It is defamatory — it is wrong.

"We as councillors act in the interest of all of our community."

Cr Kelliher said Cr Hobbs was correlating poor water quality and farming, and was not acknowledging the efforts of farmers and others in catchments to improve water quality.

If the comments continued he would consider taking further action.

Cr Kevin Malcolm said if Cr Hobbs wanted to doubt the integrity of the people she was working with, she should name the councillors she was talking about, and the media should not print her comments unless those councillors were named.

He wanted it to be noted he voted against the plan, which attempted to provide an interim framework for water rights in the region, because he believed it was rushed and not consulted on correctly.

"Its form at the time would not deliver the environmental gains that it should [have]."

Councillors had the opportunity to put their case to a motion and whether the motion was won or lost, councillors had to carry on and ensure effective action was carried out, he said.

"You just have to learn to move on — we are not there for our own personal gains."

"[The regional council is] in a very good place, we are hiring very good staff, and we have got the will to help Otago get environmental gains. Why don’t we just pull our heads in and get into it?" he said.

When asked to respond to their comments, Cr Hobbs decided she would stay silent.

The council has and continues failing to protect Otago's unique environment. They must put the environment first and stop compromising it for economic gain.

Hobbs is a liability and has added nothing useful to this mix. Meanwhile the other councillors are asleep at the wheel (except Laws and Noone) . The old crew of councillors are responsible for the millions and millions spent on wasted plan changes, i.e PC6A and the second Regional Policy Statement. They approved these dog plans and now the ratepayer has to do them again as they are not fit for purpose. Time to get someone in who knows what they are doing and stop wasting ratepayer's millions.

The ORC needs a centrist, pragmatic chair; a skilled, independent operator who can reach over the table and work with people all across the political spectrum, and the "town/country divide" to achieve a common vision and get actual action on serious environmental issues. The longer the council is deadlocked, the worse things get.

Hobbs seems to be the exact opposite of what the ORC needs: a divisive ideologue. And when things don't go her way she spits the dummy and throws around wild acusations which she then refuses to back up, as we see documented in this report.

Defamatory ... is that like calling the councillors a bunch of overpaid brainless b'stards that haven't got a bloody clue about what they're actually doing ???

Hobbs is doing a good job.