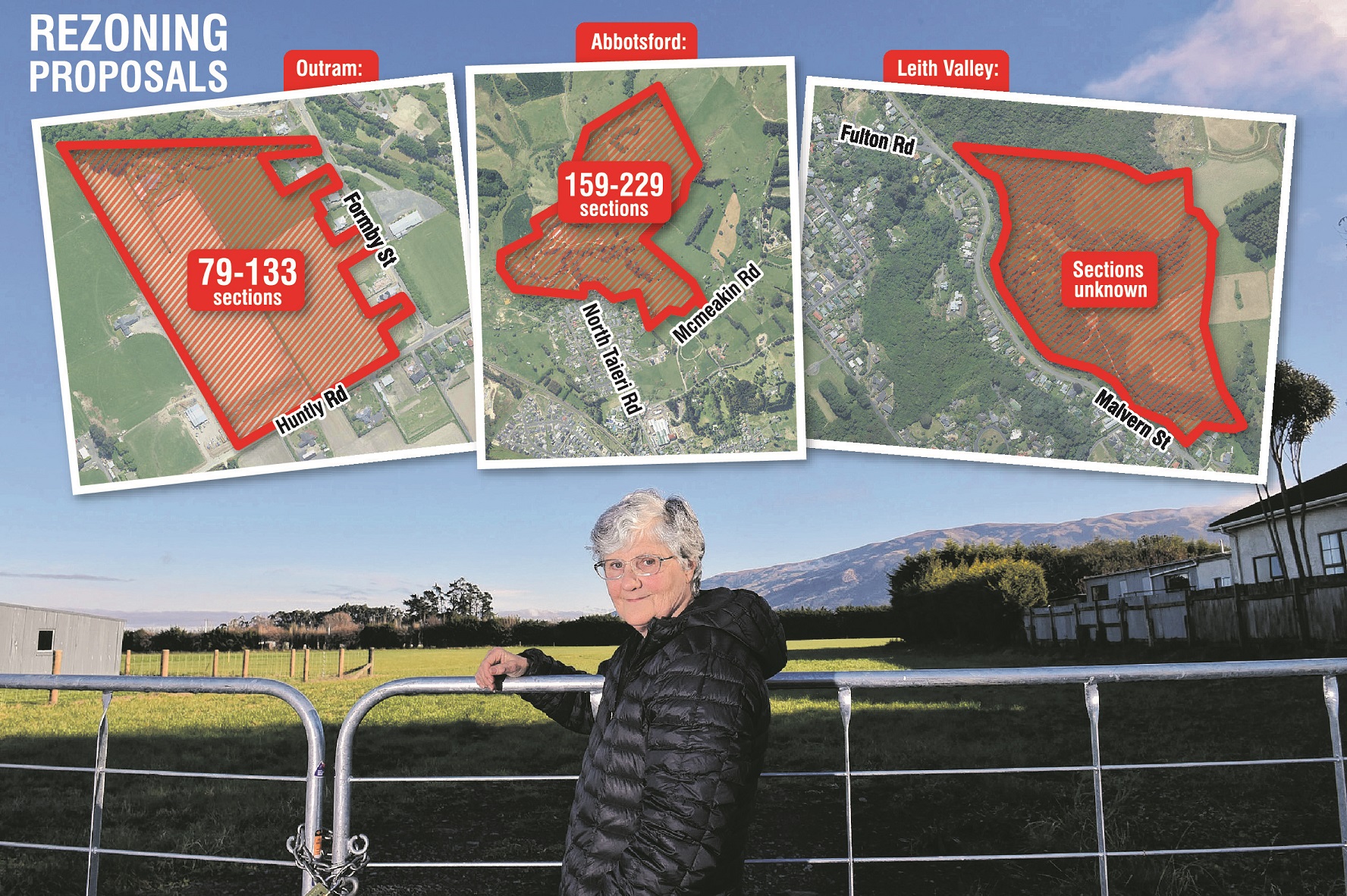 Outram resident Margaret Henry stands in front of the land for a proposed subdivision. Inset: Proposals for (from left) Outram, Abbotsford and Leith Valley. PHOTO: GREGOR RICHARDSON/GRAPHICS: MAT PATCHETT
Residents of Outram are concerned their water supply will be contaminated should a development on the edge of the town be approved.

The Dunedin City Council is consulting over changes to its district plan to encourage the building of more homes in the city.

Developer CC Otago has applied to build up to 133 houses at the corner of Formby St and Huntly Rd in Outram.

The developer has applied to have the area rezoned from rural Taieri plain zone to township and settlement zone to allow the houses to be built.

But the site’s neighbours say the area is totally unsuitable for the proposed development.

"[A flood] washes out the septic tanks, it gets into the inlets and outer flows ... and there’s a mess of clean-up."

The developer’s submission said houses would use septic tanks if larger sections were approved, and wastewater would be sent to a neighbouring property for treatment and dispersal if a more high-density plan was approved.

Another issue was the quality of the land, and Mrs Henry said it was "outrageous" to build houses on land that historically was a hub of market gardens and food production.

The land proposed for rezoning was graded as level 1 high-class soil, and only 15% of the soil in New Zealand had that classification, Mrs Henry said.

Covid-19 had highlighted the need for food security, and loss of good soil for growing food was putting that in danger.

Outram resident Dianne Webster has lived in the area for 28 years and said she had seen a change in the community in recent years as subdivisions were built on its outskirts.

The township did not have the amenities needed to service the extra houses, she said.

"We have one shop, one garage, one library, one church, one school — how’s it going to affect everyone in Outram? It is horrific."

Residents of other neighbourhoods on the outskirts of Dunedin are also concerned about potential development near their homes.

Up to 229 lots feature in a proposed development between North Taieri and McMeakin Rds in Abbotsford.

The rezoning application from developer Wendy Campbell is seeking to have the area rezoned from rural hill slopes zone to a mixture of general residential, low-density residential and recreational zones.

The road was very narrow and there were already issues with parents collecting children, and the increased traffic from the extra houses would put further pressure on the situation, he said.

A leaflet was anonymously dropped into mailboxes along North Taieri Rd which said the subdivision would cause a "conservative estimate" of 500 extra car trips on the road daily.

It also said the land was unsuitable for housing as it had a history of coal mines and slips.

A geotechnical assessment was included as part of the developer’s submission and identified areas with these hazards in the proposed area.

Plans included with the developer’s submission showed these areas would be used for a mixture of parkland and native bush rather than houses.

Abbotsford is another area to have a rezoning request.

A submission asks for two sections northeast of Malvern St to switch from a rural zone to a large-lot residential zone.

Residents in affected areas have until Thursday to send the council a submission opposing the changes in their neighbourhood.

Earlier in the week, residents of Chain Hills Rd in Mosgiel raised concerns about increased traffic and loss of their neighbourhood’s rural character if a development was approved near their homes.

However, the Gladstone Family Trust, which has applied for the area to be rezoned, said "affordable views with great views and great sun should be available to all".

A spokesman for the trust said this was achievable by building on smaller section sizes, and it was keen to start building as quickly as possible should the rezoning be successful.

It also intended to bring more amenities to the area with walkways and reticulated services, including telecommunications infrastructure, added to the neighbourhood.

There are also plans to plant native bush in gullies on the site, and retain open pastures on areas of the site too steep for housing.

It said it accepted that it was likely the council would receive submissions in opposition to its plans and it welcomed all feedback received.

I bet this has nothing to do with water and all about a bunch of NIMBYs not wanting more people living in "their" spot. Reminiscent of the Mosgiel story the other day...

"The land proposed for rezoning was graded as level 1 high-class soil, and only 15% of the soil in New Zealand had that classification, Mrs Henry said."
That fact should disqualify the proposal from the start !!!
The second fact that makes no sense, is it's distance from the CBD.
We need consolidation of services, not more expansion.
The expense of privileged living so far out of town while not working in that area, is a burden ratepayers don't need.

The recent $1,000,000 sale of a very ordinary spec house built in Balmoral subdivision in Outram sets the stage for the developer to sell sections for $400k plus. Buyers must add at their expense septic tanks. Long-time locals treasure their environment and have no desire to welcome a bunch of commuters who have no respect for the high class soil they have destroyed with their huge 300m2 homes complete with 5 car garaging. It’s not nimbyism, it’s respect for our environment and a realistic approach to living in a septic tank high density area, hazard 2 level flood potential, no efficient storm water management system, and land prone to liquefaction. Buyers beware: do your homework and above all buy sites at 9 metres above sea level or higher. Just because the DCC issues building permits, that doesn’t mean it’s a safe section. Just look at what happened in Anzac Court subdivision! Million dollar houses flooded.

I am sick of continually reading where some small group of locals are upset and distressed because someone else wants to move into their area. Hawea, Mosgeil, Outram or Arrowtown. There is always some reason, real or imagined why these places can't possibly accomodate any more residents.

Guess what, before someone built your house that was an empty block of land, be that a farm, plantation and in some cases a swamp. Stiff luck, you need to learn to share your enviroment with other people. Stop being so selfish, because thats all you are: sorry thats not right, you are also being a little greedy.

What will Dunedin be if we keep building out every space of nature in suburbs? If we smother every green hill and paddock in outlying suburbs & communities with concrete? We'll be a sprawling ugly unattractive "Dunedin". Not "wild Dunedin". Just a never-ending suburb of concrete gardens, with too few amenities, and a heartless central city.
People value Dunedin for its culture AND its nature on the doorstep. These subdivisions are smothering that nature. Gone forever.
Well-off people travel to Central Otago & national parks to be in nature. The rest of us with no disposable income rely on experiencing nature in local neighbourhoods.
These subdivisions are obscene. On beautiful land that gets smothered & can never be returned.
Advanced, attractive cities (the ones we travel to holiday in) have been building up & within their central cities. Dn's subdivisions on high-value land are spoiling what makes Dunedin special & desirable.
Subdivisions are not "sharing our environment". They smother our environment. Selfish subdivisions ROB the public & future generations of nature in their lives.
Building over it is what is selfish - to current & future generations.

This pandemic is one of many to come, and we see how international trade is not a certainty - that ships and planes may stop coming here in a severe pandamic --- and more severe, regular pandemics are forecast by international leaders in virology. And geopolitical tensions could bring war in the coming decade. Yet Dunedin is now subdividing on its high-value farm and horticulture land, and encouraging sprawl. Where is the strategic vision in this? Where will we grow our crops and farm our meat if transport becomes an issue? Dunedin's food security is getting weaker.

Likewise, the time of OVER supply of houses is almost upon us. Housing stock has almost caught up, but developers won't tell you that. Lower migration, lower fertility rates.