Wellington is now in alert level 2 after a Covid-19 positive man from Sydney visited several locations in the capital at the weekend.

The restrictions for the region, including Wairarapa and Kāpiti Coast, took effect from 6pm today and will stay in place until 11.59pm on Sunday.

Under alert level 2, gatherings are limited to 100 people, and face masks would be compulsory on public transport while people were encouraged to wear them while waiting for transport.

The rest of New Zealand remains at alert level 1.

The Covid case was likely to have been infected before they travelled to New Zealand and was linked to the Sydney cluster, officials said this afternoon.

The man works in a healthcare workplace near Bondi Junction - an area linked to the current outbreak in Sydney.

He stayed at the Rydges Hotel in Featherston St and visited several places of interest in Wellington, including central city restaurants and cafes, a bar, a Countdown supermarket and popular tourist attractions Te Papa and the Weta Cave Shop. 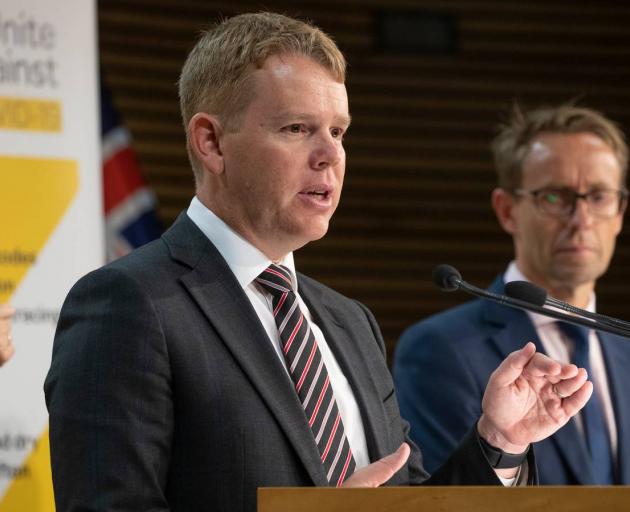 Hipkins later told Newstalk ZB's Heather du Plessis-Allan that the public health risk was low - but that didn't mean there was "no risk".

"We know that we've got a couple of exposure events where we had someone with Covid-19 in an environment where Covid-19 could potentially spread reasonably quickly. That increases the risk. But it still is, overall, low risk at this point."

The man may have the more infectious Delta variant - and if so, it would mark the first time the variant had been circulating in New Zealand as part of a community outbreak.

Hipkins told du Plessis-Allan the results for the man's partner hadn't been returned yet.

The Ministry of Health confirmed all four close contacts of the Sydney tourist had returned initial negative tests.

Two of the people are in Palmerston North and the other two are in Tauranga.

Other dedicated testing stations in Wellington and their opening hours are as follows:

• Wellington central, 196-200 Taranaki Street. Will remain open until 9pm tonight, subject to demand and will reopen tomorrow at 10am.
• Porirua, 178 Bedford Street. Will be until 6pm tonight and reopen at 9am tomorrow.
• Johnsonville Medical Centre, 24 Moorefield Road. Will be open tomorrow 9.30am-4pm.
• Lower Hutt, 729 High St. Open 9am to 4pm.
• Upper Hutt, Heretaunga Christian Centre, 51 Lane Street. Open 9am to 4.30pm.

Yesterday the New Zealand and New South Wales travel bubble was paused for 72 hours after 10 new local cases were reported in Sydney. 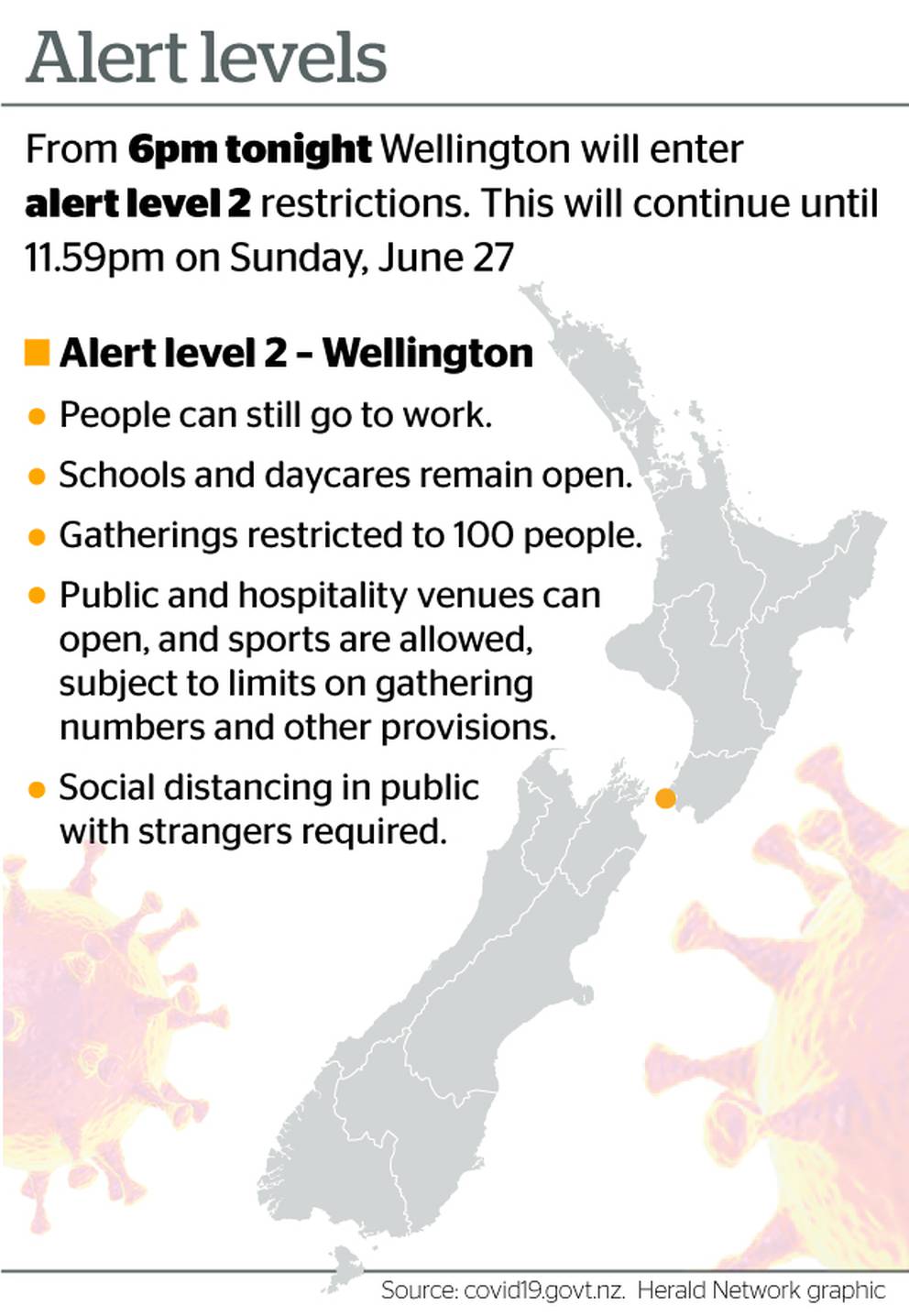 Hipkins said the transtasman bubble had caused him a few "sleepless nights" but on balance he thought it had been working well.

Hospitality outlets could open but needed to apply the three S's - seated, separate, and having a single server.

The move to alert level 2 would prohibit crowds at tonight's Wellington Sports Awards, the Māori All Blacks v Samoa rugby match at Sky Stadium on Saturday, as well as home matches for the Saints basketballers and Pulse netballers on Sunday, Newstalk ZB reports.

Face masks are now compulsory on public transport and people were encouraged to wear them while waiting for transport.

Hipkins said the infected man had received one dose of the AstraZeneca vaccine and his partner, whom he travelled with, was awaiting her Covid-19 test results. He said the man noticed symptoms on Monday morning before leaving on the mid-morning flight from Wellington Airport.

Contact tracers were working "at pace", he said, and this case was a reminder of the need to use the Covid tracer app and to have the Bluetooth function turned on.

Hipkins said if people had been in the Wellington region over the weekend, they needed to take the alert level restrictions with them. If someone had been in Wellington and was now in Christchurch, for example, they should not go to big gatherings.

Director-General of Health Dr Ashley Bloomfield said it was not yet known if the case has the more infectious delta variant, but regardless - the response will be the same. "And it is for people to act quickly to isolate and to be tested."

The man used the Covid-19 tracer app while in Wellington and Bloomfield believed there would be "quite a number of exposure sites".

Passengers on the traveller's flights Qantas QF163, which left Sydney at 7.05pm on Friday June 18 and landed in Wellington at 12.12am on Saturday June 19; and Air New Zealand NZ247, which left Wellington at 10.13am on Monday June 21, arriving in Sydney at 11.33am, were being asked to get tested and isolate for 14 days.

Te Papa, the national museum, is a popular attraction in the capital. Photo: ODT files

This is the first time an Australian traveller has brought Covid-19 to NZ, and since gone home, the Ministry of Health said.

Meanwhile, University of Otago epidemiologist Michael Baker is calling for half-levels to be added to the Covid-19 alert system to better respond to outbreaks. He said there needed to be more advice to the public about wearing masks.

Baker told RNZ's Nine to Noon programme the alert level system has not caught up with science and would be easy to update.

The Ministry of Health has reminded people to please remain vigilant and stick to the basics: stay home if unwell and get advice about having a test, wash hands regularly, cough and sneeze into the elbow, wear masks or face coverings on all public transport, and keep track of where you’ve been - scan QR codes wherever you go and turn on Bluetooth tracing in the app dashboard.

The New South Wales health authority issued an alert late on Tuesday about the flights between Wellington and Sydney linked to the case.

It said passengers who were on one flight into Wellington, and one flight back to Sydney last weekend, are considered close contacts of a Covid-19 case.

The Australian state's health authority is urging anyone who was on those flights to get a Covid-19 test, and to self-isolate for 14 days, regardless of the result.

Genome sequencing was under way in Australia to see if the case is linked to the current outbreak in Sydney.

Passengers on a Qantas and an Air NZ flight are being considered close contacts of a Covid-19 case. Photo: Getty Images
Quarantine-free travel from New South Wales to New Zealand had already been temporarily suspended due to the rising case numbers in Sydney, and will last at least 72 hours.

The latest surge in cases in the Sydney Bondi cluster led NSW Premier Gladys Berejiklian to extend the state's mask mandate for all indoor public venues to midnight on Wednesday June 30.

Local government areas of Wollongong and Shellharbour, which had compulsory masks for public transport, would be subjected to the same mask rules as Sydney.

It's not, of course. It takes one Australian, on the town.

No, stay careful. It's actually not too much to ask

Use your tracer app, or if you don't have the technology sign in manually to the shops and other places you visit. Keep your own record of where you've been. Follow the rules for whatever level of alert your region is facing. Go for your vaccination when you're invited.
No need to be fearful if you keep yourself aware and follow the rules and guidelines.