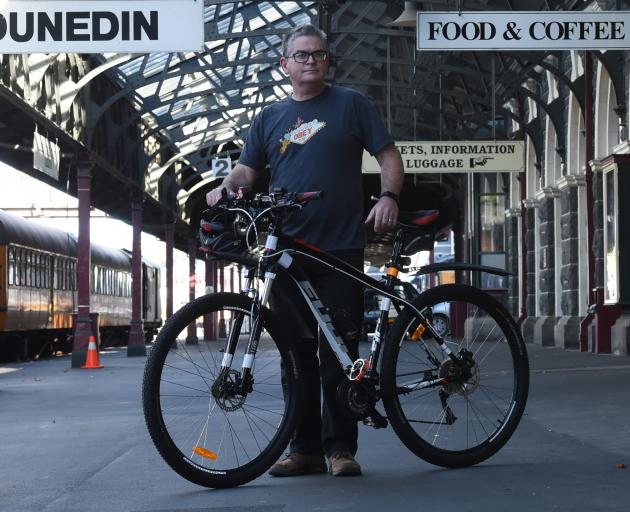 Dunedin Tunnels Trail Trust chairman Gerard Hyland is thrilled a new rail tunnel trail near Dunedin is on the verge of opening. Photo: Gregor Richardson.
Dunedin is one step closer to being joined to the Otago Central Rail Trail and the national cycleway network in what could give the city a major tourism boost.

The trust raising money for a cycleway through the old Chain Hills tunnel near Mosgiel has been successful in its efforts, after raising more than $500,000 in two months.

The trust says the tunnel should be open to cyclists before long. Just the old Caversham tunnel is still to go, to connect the city to Mosgiel, then by rail to Middlemarch and the rest of the South Island trails.

Dunedin Tunnels Trail Trust chairman Gerard Hyland said the trust had raised what it needed to buy the property controlling access to the tunnel.

The timing of its opening was uncertain, but the trust said it could be within ''eight to 18 months''. It still needed to raise about $30,000 more to pay for legal fees and to complete the necessary easements and surveying. 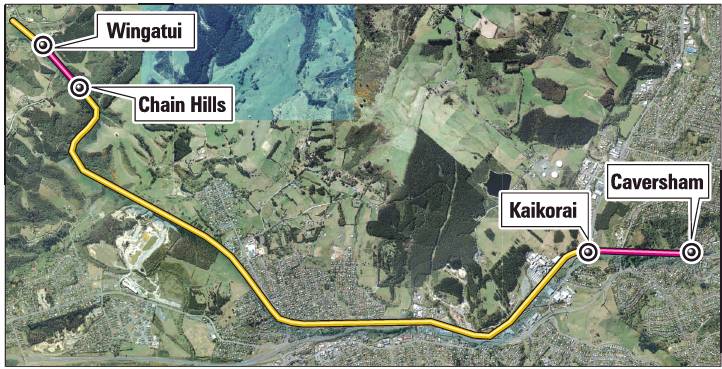 Graphic: ODT
The feat has been welcomed by the Dunedin City Council, which said the initiative could provide ''leverage'' for national funding.

The council is considering the possibility of opening the old Caversham tunnel, with potential for a loop from Dunedin to the Otago Central Rail Trail, and back through the Roxburgh Gorge and Clutha Gold trails, through Milton, to Mosgiel.

Mr Hyland was overjoyed the trust had got over the line.

''It is absolutely brilliant,'' he said.

The trust announced in February a deal to buy the crucial property, but only if it could raise $550,000 in cash and loans by April 27.

Mr Hyland said once documentation was completed, the sale and purchase agreement would go through on May 11.

The trust would start the process of easement for the trail.

There was work to be done on the trail from Gladstone Rd to the property, which was an easement on another section of about 300m.

Other than that, the trust needed to work on the trail itself, and undertake repair work within the tunnel walls.

The tunnel itself was safe. It had two gas vents capped and sewerage pipes buried inside deep enough, and of a quality and an age that they were ''quite safe''.

On the city side of the tunnel, work to formalise an easement with KiwiRail was needed.

''It's been so many years of slow plodding, getting nowhere,'' Mr Hyland said.

''We suddenly went from that to 'OK, we've got two and a-half months to raise just over half a million dollars with community support'.

But some ''very generous'' people from the community had helped, lending or giving money, with some big cash donations.

''It's just been awesome seeing the support.''

The Dunedin City Council's support was an important part of that, and it was ''right behind the project''.

Enterprise Dunedin destination manager Ryan Craig said: ''I think any access of the cycle network to the Taieri Plain is terrific.''

A council spokeswoman said the council had commissioned a report looking into what work would be required if the Caversham Tunnel was to be reopened.

Mr Craig said the initiatives would send good indicators about connecting Dunedin as a gateway to other trails, and was positive for tourism.

Cycling was a focus for both Tourism New Zealand and Enterprise Dunedin.

It would also enable the council to ''further the conversation with New Zealand Cycle Trail'', the government organisation whose objective it was to connect New Zealand by bicycle.

Asked whether opening the tunnels would help gain government funding, Mr Craig said it would ''provide leverage with those groups''.

Seriously! These people think they have achieved something? What a joke.
They have raised very little in cash. They have arranged loans they expect other people to pay off.
And to what end? Just to buy some land to access to a tunnel they don't own. Further they expect more money from other people to make the tunnel usable and create even more track from the end of the tunnel to where ever.

This noisy minority still want $10million to finish the Pt Chalmers track. Add the Lookout Point tunnel and this Wingatui fiasco and we have a wish list of around $20 million. For what? At most a few hundred potential Dunedin users and a smattering of tourists. None of whom want to pay a cent. Maintenance of all these tracks - just a few hundred thousand a year from Dunedin ratepayers.

This mob has achieved nothing but future debt for other people.

Tunnel Trust raised over $97,000 in cash, very little indeed. I'm glad you mentioned the Port Chalmers extension and totally agree that it should not be prioritized over Wingatui and Caversham tunnels trail, just because catchment area is so much bigger and implementation costs are lower. And those few hundreds who still cycle despite hills and unsafe roads would probably turn into a bigger number.
As for maintenance cost, google "NZTA benefits of investing in cycling" to find out that one of claimed benefits is "reduced costs for councils". Surprise!
And by the way, what's the alternative? It is perfectly clear that building cities only for cars is the dead-end branch of evolution. Look at Auckland, or almost any other big city for that matter.

Totally agree with you Keith. These cyclists are a real menace. There is no way they can safely go through Caversham Tunnel.It has DCC stormwater and sewerage pipes running through it to connect to the South Dunedin system. To let these people in is to expose ratepayers to real Health & Safety issues. Definitely not waŕranting the massive expenditure to provide alternative routes as the proposed staff report to Council will show.

>>There is no way they can safely go through Caversham Tunnel

Cyclist and walkers were using old Caversham tunnel with all its pipes and utilities for decades with no incidents until 2006. Users would be happy enough if it was just reopened as is - like it was - without those mythical millions of investments. Did you bother to actually visit and have a look at the tunnel ends? They are very accessible, just let DCC put the gates down and problem solved.

It would be nice Keith if you could add something to the discussion without the insults. And your alternate facts do you no credit. For example the loans will be repaid by the resale of the property once access has been secured. I learned that from attending one of their open days and I am guessing you didn't.
I was impressed some years ago to see the very well-used ocean-front walkway/cycleway in New Plymouth. I wished we had a Council with as much vision. I heard that there was initial harsh criticism from ratepayers about the cost, but with the popularity of the trail that turned within a few years to calls for it to be extended. And still it grows in length and use.
The Tunnels Trust have pulled off a wonderful achievement in securing this vital link in what will be a popular trail. The last thing they deserve is ill-informed criticism.