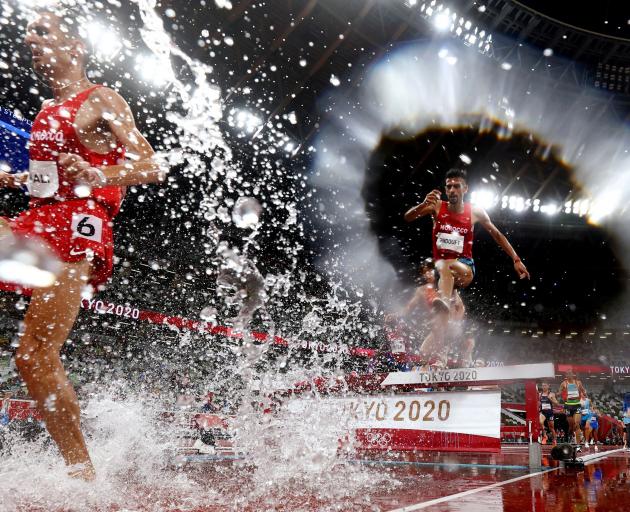 Moroccan athletes Soufiane Elbakkali and Mohamed Tindouft compete during the final of the men’s 3000m steeplechase at the Tokyo Olympics. PHOTOS: REUTERS
Welcome to Brisbane

It’s 2032. Covid-19 is a distant memory, newspapers are king again as all social media platforms have been outlawed, we’ve finally got our flying cars, humanity has solved the climate crisis that it caused, and the Winston Churchill Party leads a new coalition government.

And, in Brisbane, the Olympic Games are about to be held in Australia for the first time in 32 years.

All the traditional sports are there — though the 50km walk has mercifully been shelved — and the IOC has introduced seven new events. Let’s take a look at them.

Cricket. Well, hello. A major summer sports event in Australia without cricket? You’re dreamin’. Cricket makes a comeback after a lone appearance — with Britain and France, weirdly — at the 1900 Olympics. The Black Caps are three-time defending world test champions but obviously that format is unsuitable for the Olympics. So some bright bazzoo has dreamed up The 25. A team has 25 balls to hit as many maximums (worth 55 runs) as possible. Five bowlers get five balls each. And there are five stumps.

Sheep shearing. Another essential part of the Australian sporting landscape. And great for the Black Blades, who call Sir David Fagan out of retirement to lead them once more.

Netball. The wheels are already in motion for the biggest women’s code in Australasia to make its Olympic debut. Lock in the Silver Ferns for a medal.

V8 Supercars. It doesn’t get more Australian than the sound of loud exhausts down Conrod Straight.

Tug of war. Another blast from the past — it was at the Olympics from 1900 to 1920. The tug of war also ticks the inclusiveness box as teams will be mixed gender. And games — tugs? contests? — will take place over a crocodile pit.

Australian rules football. Hey, the Japanese were allowed to bring karate back for Tokyo.

Hat tip to Dunedin Mayor Aaron Hawkins for alerting me to what must be one of the most extraordinary sporting events of all.

We speak of the marathon at the 1904 Olympics in St Louis.

Thirty-two athletes made it to the start line, but only 14 finished.

As for the remaining details, well, I can just lift straight from Wikipedia.—

Row, what a feeling

A belated acknowledgement of the Otago University Rowing Club that had no fewer than seven alumni with the New Zealand team at the Tokyo Olympics.

You might have missed a lovely story out of American basketball at the Olympics.

It came 37 years after his mother, Hall of Famer Pamela McGee, won gold with the US women at the Los Angeles Olympics.

Chances of this All Blacks v Springboks test going ahead at Forsyth Barr Stadium on September 25?

That was a knock on!

I'm trying to think what a NZ Winston Churchill Party might have as it's platform? Bound to be Antifa though.
Now a Winston Peters Party... that sounds more likely!