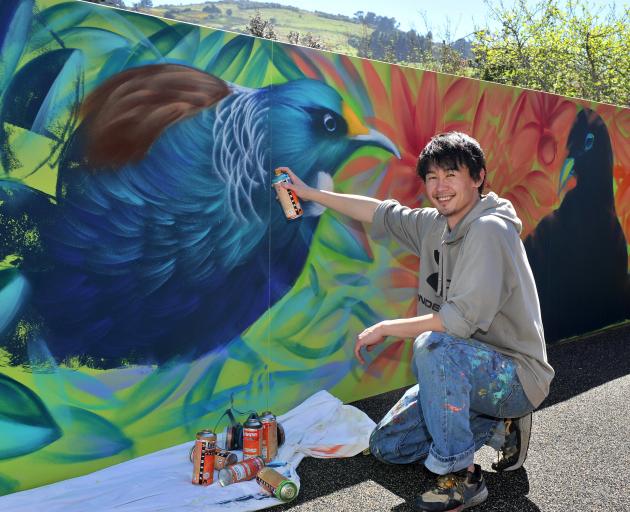 Applying the finer details to his latest mural at Ross Home & Hospital in Dunedin is street artist Koryu Aoshima yesterday. PHOTO: CHRISTINE O'CONNOR
A mural has been painted at a Dunedin rest-home to help brighten the lives of the residents.

The mural features a tui, a kereru and a kingfisher.

Mr Aoshima said he usually painted in public spaces and it was a real privilege to be invited into somebody’s home to work, he said.

The mural was painted in the courtyard outside the dementia unit and it felt great to be able to bring some beauty into the lives of the patients, he said.

He loved seeing the ‘‘pure reaction on people’s faces’’ as he worked, which was not as common while working on the street.

The finishing touches would be put on the mural over the weekend and it should be finished on Monday, he said.

He used a paint roller to colour the background, spray cans for the bulk of the art and then finished off the finer details with a paint brush.

Mr Aoshima had painted more than 20 murals around New Zealand since arriving early last year, including a large kea at St Clair earlier this year.

The mural was organised by a group of University of Otago students for a management paper.

Student Tiffany Horton said the group wanted to help ease some of the loneliness among elderly people with their project.

They had originally planned to get children from a local school to paint the wall, but after the Alert Level 4 lockdown the plan had to change.

They contacted Mr Aoshima and he was happy to tackle the wall for a low fee, she said.

The group also produced a booklet of information and activities for the patients to keep them busy, she said.

The wall looked impressive, but it also served a practical function.

The home was ‘‘thrilled’’ with the mural and thankful for the ‘‘wonderful artwork’’, she said.

Simply stunning. Imagine if the council employed Koryu Aoshima to brighten up our town.