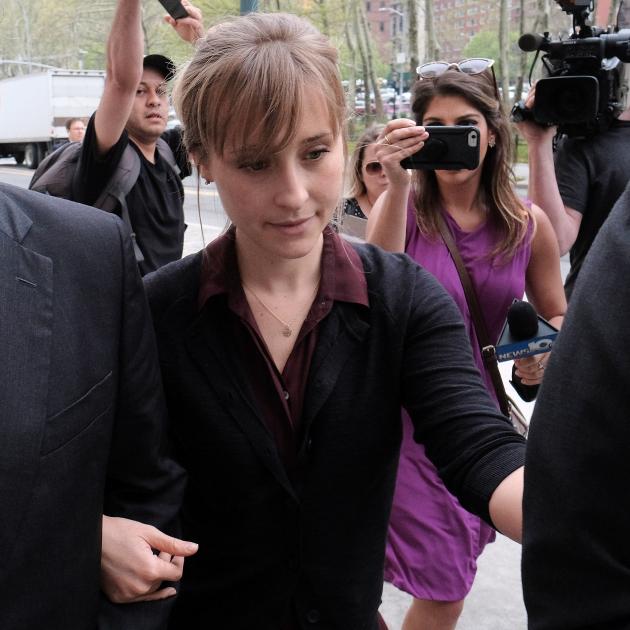 Actor Allison Mack, known for her role in the TV series Smallville, leaves the United States Federal Courthouse after being sentenced for her part in the NXIVM cult, in New York. PHOTO: GETTY IMAGES
I have just had my second Covid vaccination and I am lying in bed watching Wild, Wild Country, a documentary about Bagwhan Rajneesh’s commune in Oregon, a tale of devotion, salmonella and blended beavers. Yesterday I walked by the lake listening to a podcast about Theranos and how they might have conned the world into believing in their blood tests. Last week I was presumably the last person in the world to watch Going Clear: Scientology and the Prison of Belief and marvel at, among other things, their huge blue buildings, but then I was late to it because I had been busy dissecting why I didn’t like the tone of the NXIVM sex-slave cult documentary. (Entitlement.) Also I was feeling sorry for myself that I’d accidentally poked the anti-vax bear in a group chat by mentioning that I was so very happy to be going for my second vaccination.

Four "i"s in "individualism", one in "conspiracy" and none in "con"or "cult". Maybe I have a mild fever because I’m feverishly trying to do the maths about how the first is related to the others.

"Cult" is a root word, meaning it’s possible to grow more words from it. More, the word itself suggests growth, such as cultivation, or cultures in a lab. "Con" has multiple connotations (see what I did there) with leanings to both "convict" and "confidence trickster". And "conspiracy", well, I’d tell you what it means, actually I’ll send you a link, oh wait that one’s broken but anyway shhhh.

I think it’s fair to say that I was inculcated for a while, in that I was brought up Catholic. The hallmarks I’m basing this on are many, and classic. The repetition of beliefs and affirmations (I can still recite probably three quarters of the missal). The strict hierarchy. The costumes. The pageantry. The sense of community, fused by sweet, sweet incense. Also, though, the guilt, the shame and the fear. And more, the entitlement. Praying for people less special, or at least less saved, and talking about how to save more of them over fig rolls (the most superior biscuits) and cups of tea.

Two "i"s in "colonisation" and two in "indigenous" and it’s the first of those that has been capitally prioritised, in histories, in media, in healthcare, in access, in language. A whitewash of entitlement. I wonder how much more that would have been augmented if I’d been born a few years later, one of Thatcher’s individualistic children? Or to have grown up all my life with my digital surroundings customised to a fixed, commodifiable version of me? (The "i"s ring strong in "commodifiable".)

Five "i"s in "individualistic" and some of us have learned, and been taught, that self-reflection, self-improvement and self-actualisation are both a means and an end. The anti-vax bear in my WhatsApp group has two degrees and is qualified as a yoga instructor and is exceptionally sure of their own personal rights and rightness. The I that is me knows it won’t do any good to blind them with the brilliance of my phrase about no "i" in team but one big one in"‘entitlement" but I try anyway because of course I think I’m right too. And Jesus loves a trier.

Surely I can come up with something just as genius about having both "u" and "i" in community, to counter them, I think, but then I fall down another etymology hole about the meaning of the word "commune". So I get back to the maths, which as far as I can now work out, looks something like rampant individualism = entitlement + fragility = watch out!

When the mostly rich, mostly white people whose stories are being told on my devices get out of the cults or away from the cons, they’re mostly happy to be with their families, and sometimes sad about the ones they’ve left behind. When I get out of bed today I’m going to have a big glass of water, walk up the road to play with a friend’s dogs, spend some time uncapitalised.

'Commune. Intentional community, let down by men wondering who's Alpha.

Paris 1870's. Contained self sustaining departement of communards. Fired upon by govt troops.