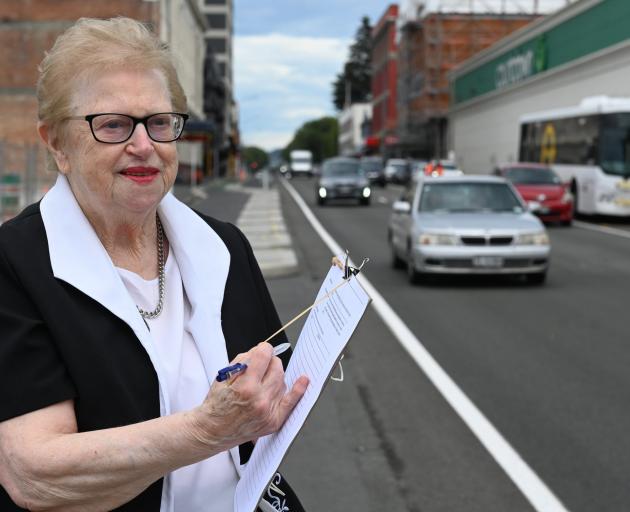 The much-used State Highway1 pair of one-way routes flowed well and Waka Kotahi NZ Transport Agency’s position that they should be kept ought to be respected, Grey Power Otago president Jo Millar said.

Mrs Millar was unimpressed by the Dunedin City Council’s advocacy for an alternative, two-way model and suspicious of what appeared to be an agenda to persuade Transport Minister Michael Wood to "override" the transport agency’s assessment.

She said the opinions of people who used the highway should be canvassed.

"The people using the system have a right to a say before the council goes to the minister."

Her viewpoint has been challenged by University of Otago environmental health associate professor Alex Macmillan, whose research focuses on links between urban environments, sustainability and health.

Construction of a new hospital in the central city created a once-in-a-generation opportunity to fix transport, health and "fairness" problems in the area, Prof Macmillan said.

Older people were less likely to be able to drive and more likely to rely on biking, walking, wheelchairs and public transport, she said.

The one-way system hampered access to the hospital and university and it was a major barrier to ways people wanted to get around.

The transport agency’s backing of the one-way system ran counter to its own strategic direction, she said.

Dunedin Mayor Aaron Hawkins said the council did not have a preferred option for the layout of the state highway, but it preferred an alternative to the agency’s stance "as the starting point" for discussion.

If big changes were proposed, more public consultation was inevitable.

Cr David Benson-Pope said he hoped organisers of the petition would read both the transport agency’s business case and a health impact assessment.

Both pointed to potential benefits from dumping the one-way system, although the agency was unconvinced the case was compelling enough.

Great to see public action supporting an efficient link across the city
These bumbling 'greenies' represent less than 9 in 100 citizens nationwide yet they dominate the media, universities and political types
It would be interesting to know how many make their own way in the world without sucking off the public purse with the intent of pushing their self-righteous, arrogant view, that THEY know what is sustainable, fair or equitable.
The self appointed elites claim they stand on the pulpit of science and in so doing demean the meaning of the word
"Older people were less likely to be able to drive and more likely to rely on biking, walking, wheelchairs and public transport, she said."
Really !!!!
It's the poor that are more likely to walk, cycle (not counting the lycra brigade) and use public transport !
It is efficient transport that enables the services, that support the elderly, that enables us all, to live a reasonable life
Ask anyone that assists the elderly with their medical visits or shopping if they use the car or walk or cycle or bus, even with a wheelchair ?
Ask them what the greatest obstacles are; parking, predesians, bikes, scooters, all of above ?!

The one way system works. There is absolutely surety that if it is changed to suit a few busy-bodies in the DCC it will fail us all badly.