By Kim Dungey
1 Comment
The couple behind this property wanted a New Zealand house that was inspired by Japanese design. Kim Dungey reports.

East meets West in a Japanese-inspired hideaway near Moke Lake.

From the dark timber cladding and the boulders at the entry to the sliding internal doors and decorative rain chains, the house contains several elements that define a traditional Japanese home. But is also has a New Zealand flavour, with native timber used throughout. 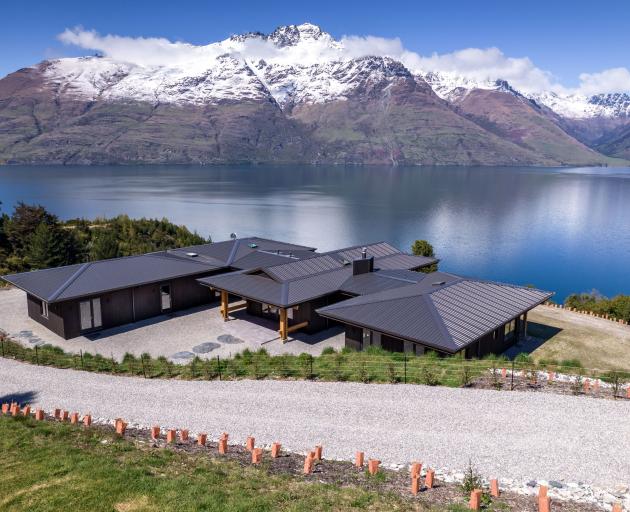 This Japanese-inspired home makes the most of its location right next to Lake Wakatipu. PHOTOS: GRANT JOHNSTON
The original owners lived in Singapore and the United Kingdom and planned to spend time in New Zealand, builder Dennis Dowling, of DCD Ltd, said.

They visited at the start of the project and followed progress in video calls, but then the couple encountered border restrictions and put the house up for sale without ever moving in. 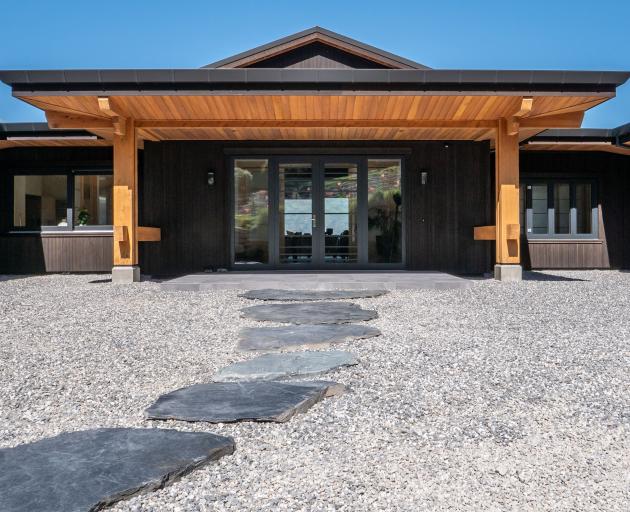 Macrocarpa features in the entry portico.
"Covid made it too challenging. It was not having any clarity about when they could get back. However, the house has been bought by Kiwis and is their part-time residence."

Roebeck said the clients, who spent much of their leisure time in Japan, wanted a warm, quiet home inspired by, but not a copy of, that country’s designs. 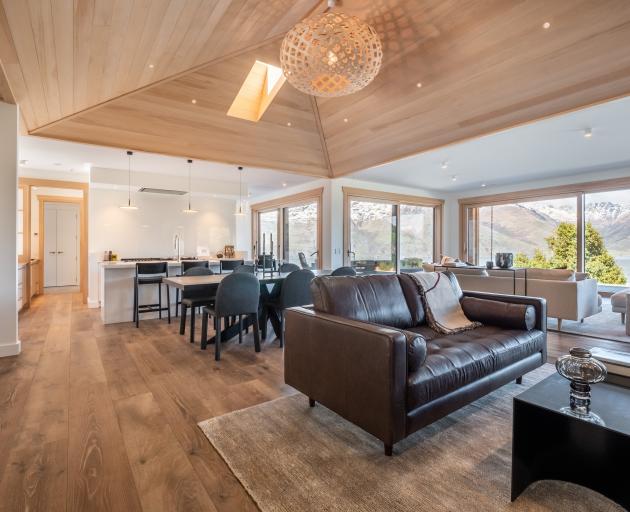 Kahikatea boards were butted together to form the 4m-high vaulted ceiling in the living area.
The dark-stained, heat-treated radiata pine cladding (Abodo) was a cost-effective alternative to charred timber shou sugi ban, a centuries-old, labour-intensive technique of preserving wood through fire.

The portico is reminiscent of those in Shinto shrines, with concealed mortise and tenon joints at the junction of the macrocarpa columns and beams.

The vaulted ceiling, which soars 4m above the open-plan kitchen-dining-living area, took a month to assemble because of its complex angles. 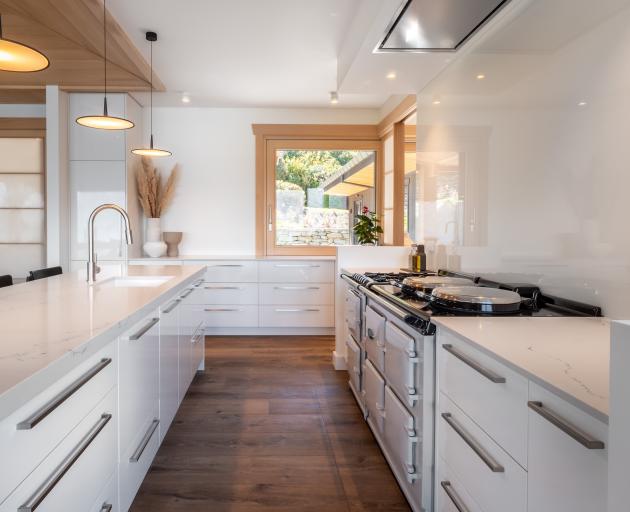 The kitchen has an Aga oven and marble-look, quartz bench tops.
Apart from the spruce window frames and the English oak flooring, all the internal timber was kahikatea, Dowling said. The builders sourced more than 2000 linear metres from around the country and had to wait six months for the last of it to be milled so they could finish the project.

New Zealand white pine also features in the entry, where timber battens fixed from behind hide secret doors to the mechanical room and ventilation system. 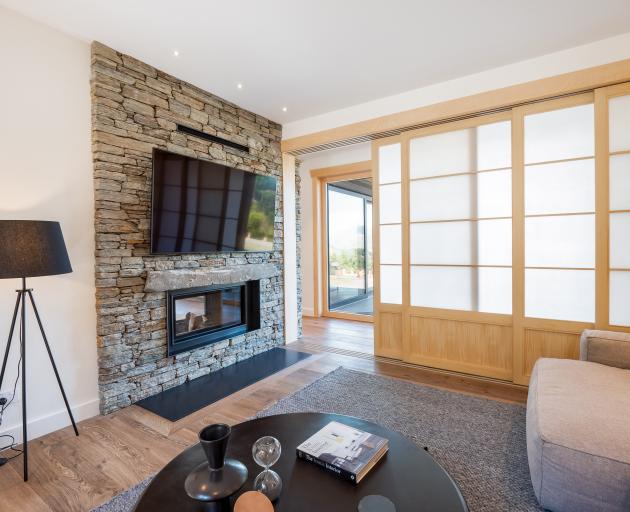 "They look like they have rice paper inserts but actually they’re fibreglass. It’s more robust and still allows light through."

As well as three bedrooms and an office, there is a bunkroom that sleeps four people. 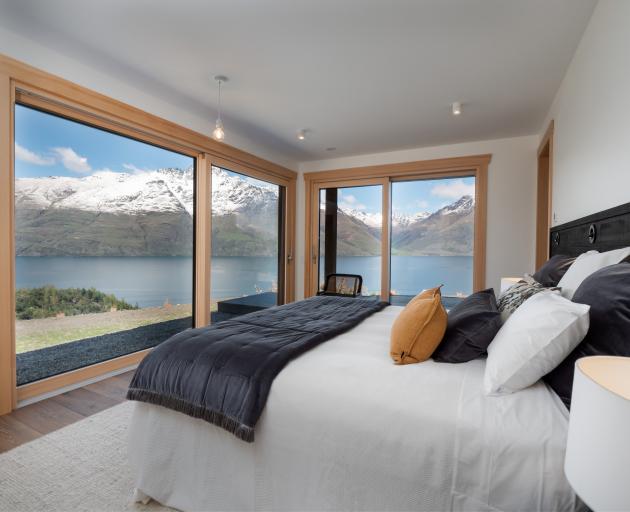 Triple glazing and spruce window frames ensure the home is cosy.
The home’s thermal performance had been designed around the property being south-facing as that was where the lake views are.

Triple-glazing was used, high-quality frames were imported from Europe and two layers of insulation gave the ceiling an R-value of 10, which was about three times higher than required in the Building Code. 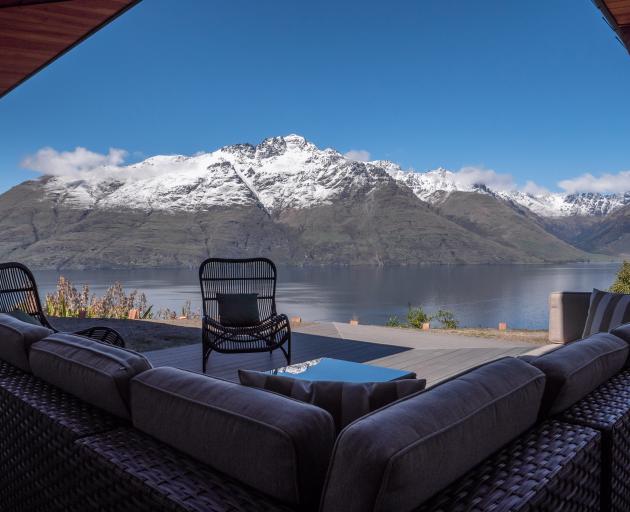 The house has an unobstructed view of Lake Wakatipu; the deck is made from recycled plastic. PHOTOS: GRANT JOHNSTON
The property also has underfloor heating, a balanced heat ventilation system and an airtight, wood fire that does not allow air to leak in from outside.

Roebeck said it was sad the clients were not able to "come enjoy the house", which was their dream. 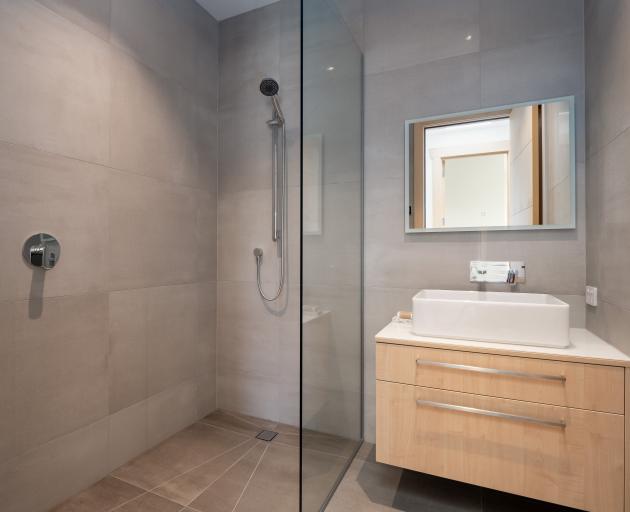 The interiors feature clean lines and a monochromatic colour palette.
"It’s a blend of the things they love," Dowling added.

"They liked the idea of harmony ... and called it the Harmony project. "

Some people are living in Eastern Style shipping containers and can't afford to buy food, but I'm sure housing NZ will look seriously at building these models in the 1,000's to help ease our housing crisis !!