A view of the future? The central car-free hub in the lower Octagon and upper Stuart St before the final Ed Sheeran concert yesterday. Photo: Gerard O'Brien
As residents and visitors soaked up the sun in the Octagon in Dunedin before last night’s final Ed Sheeran concert, some business owners were calling for the area to be permanently pedestrianised.

"Making it permanent would be amazing.

"There’s a very good vibe in the Octagon." 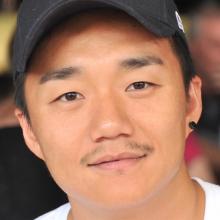 Andre Shi
Mr Shi said Dunedin should look to the success of pedestrianised shopping areas in Queenstown and Wellington. His vision for the Octagon included large awnings extending from bars and restaurants, together with outdoor heaters to improve the area’s ambience during the cooler months.

"It looks ice cold in winter at the moment."

"It should be closed permanently," he said.

Out and About mobile cafe and burger bar owner Terry Pleydell agreed the space should be permanently closed to traffic. However, he was disappointed by the lack of events and live music in the Octagon on the Easter weekend evenings.

"It could have really rocked."

Nelson concert-goer Nick Edwards, found relaxing on a beanbag in the Octagon yesterday, said the car-free hub was "fantastic," but it did not quite give Dunedin the edge on his hometown.

Cr Aaron Hawkins, a supporter of a car-free space in the lower Octagon and upper Stuart St, said he was pleased by the success of the pedestrianised Sheeran hub over the weekend.

However, he was concerned the council’s 10-year central city plan did not include funding for the Octagon.

His concerns were shared by Cr David Benson-Pope, chairman of the council’s planning and environment committee, who said the lack of funding had to be addressed.

He had long supported transforming the Octagon, together with parts of Stuart and George Sts, into pedestrian-only zones.

Claire Grenfell, the co-owner of lower Octagon bar The Craic, also supported making the Octagon a pedestrian-only space, but perhaps only during summer.

"There’s not enough people in winter."

Sue Todd Antiques owner Sue Todd had reservations and expected she would have to close her business if the area became permanently pedestrianised.

Mrs Todd suggested using automatic retractable bollards as a compromise, to close the area to traffic as needed for family-friendly events.

But she predicted a pedestrianised area would become dangerous and unpleasant during rowdier occasions like big rugby games.

"This concert is not a fair representation," she said.

DCC strategy and governance general manager Sandy Graham said making the area car-free for the Sheeran concerts was seen as a trial run by the council, but she would not be drawn on the likelihood of a permanent change.

"That’s a decision for the politicians."

If Mr Hawkins really believes there is no money in the 10 year plan then he doesn't seem to have read it.
Roughly $65 million in that plan for bike tracks, "traffic quietening" proposals. Plus a random amount, $30 milion or so, for city center rejuvenation. Most of that is dedicated to reducing traffic and parking in George st.

The reality is, just like Oamaru's silly idea to remove traffic in the wharf area on weekends, removing traffic works for some businesses but is seriously detrimental to others.
The funny side of this is Mr Hawkins preference is only of benefit to bars and clubs, the very business DCC are hell bent on closing via their idiotic approach to alcohol sales.