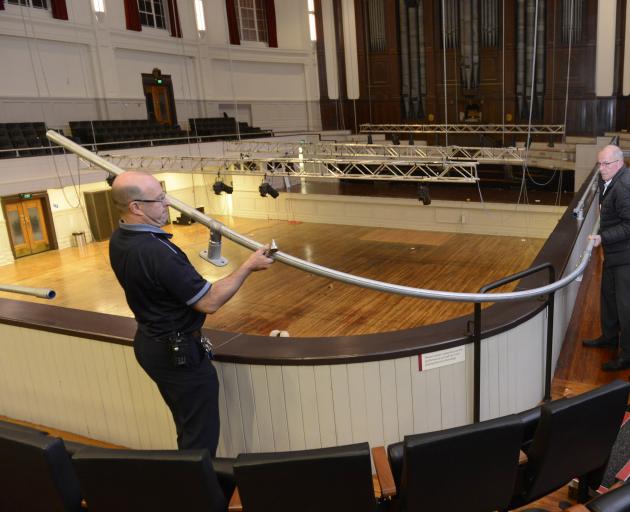 Dunedin City Council building attendant Theo Obbeek (left) and acting asset and facilities manager Mike Carter remove a section of the contentious rail from the gallery balustrade of the Dunedin Town Hall yesterday. Photo: Gerard O'Brien
Sitting behind a bar has been known to bring some pleasure in life, but not the one at the Dunedin Town Hall.

A steel safety rail on the balustrade was installed last year in response to concerns about the potential for falls.

But since then, Dunedin City Council infrastructure and networks acting general manager Leanne Mash said more concerns had been raised, about its industrial look and the way it obstructed the view of those seated in the front row of the circle.

Some patrons were incensed by the barrier, contacting the ODT's Paul Gorman to describe it as ''a monstrosity'',  ''monumentally crass'', and ''a clumsy addition''.

So the council has decided to make it ''a temporary feature'', which could be put in place for certain events, such as rock concerts.

After investigating a range of options, it was decided, in consultation with the venue managers, to take ''a risk-based approach'', she said.

''People are more likely to be on their feet dancing at a rock concert, raising the risk of someone falling from the dress circle, so the steel rail would be in place for those types of events.

''For events where people typically remain seated, there will be no rail.''

Ms Mash said a risk assessment would be conducted before each event to decide whether the rail was needed.

The council was also installing a permanent inverted U-shaped barrier in front of the balustrade at the bottom of each set of stairs leading to the front row of the dress circle, she said.

''We are also adding signs by the doors to the dress circle, asking patrons to be careful when moving to their seats.

''Further signs, fitted to the balustrade, will ask people in the front row to remain seated and not to place items on the ledge of the balustrade.

''Town hall staff will also be taking a more active role by asking patrons to stay seated during performances.''

Also, a rail of 25mm steel tubing would be permanently installed in the gods, due to the greater risk associated with that area, Ms Mash said.

''Our intent is that this approach will better manage the risks of various sorts of performances, while not detracting from the overall town hall experience.''

A council spokeswoman was not aware of anyone falling over the balustrade.

Would a frameless glass balustrade not be more suitable and eliminate the risks altogether? - sometimes I think Dunedin is stuck in side of a 1950's box and can't get out.

People will still complain, even with a see-through balustrade.

DCC can't win no matter what they do.

OK, the town hall was completed in 1930. Can anyone tell me just how many people have fallen over the edge? And if anyone has, does anyone at all believe a 100 mm, 4 inch rail will stop them falling.
This is simply risk aversion being taken to silly lengths. Take the steel and recycle it.

KeithMcC - again very wise words and they make sense however I feel I must point out you have forgotten a couple of things, between 1930 and the 1980's children climbed trees fell out of trees, crashed bikes, parents smacked children, people had common sense, and OSH was not as cottonwool-ish. Unfortunately because this doesn't happen now we have idiots that will fall, people at OSH who continue to make it safe for such idiots with no common sense who would have hurt or been killed between 1930 and the 1980's so it is unfortunate that we must have such guard rails because such people will blame the system and claim until coin from it. Looking at the models leg the wooden edge isn't that high.

The pronunciation of 'balustrade' in the video annoyed me more than it should have.