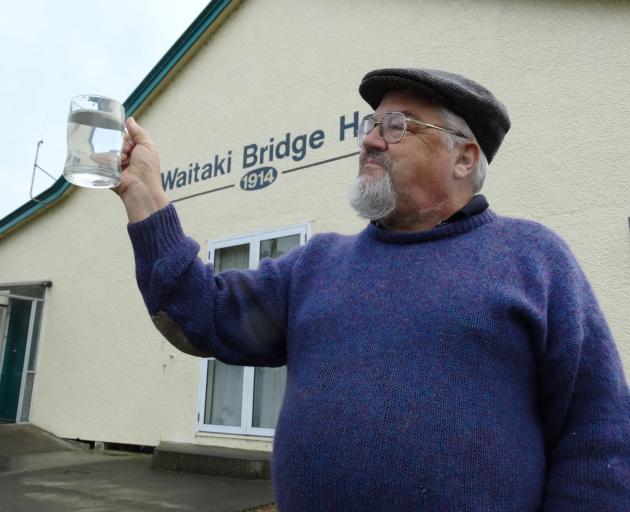 Waitaki Bridge Village resident Peter Whitlock holds a glass of water from his tap. He says the water is fine to drink, despite an Otago Regional Council directive to treat it. PHOTO: DANIEL BIRCHFIELD
A Waitaki Bridge Village resident says there is nothing wrong with the quality of water from the Lower Waitaki Plains bores, where elevated levels of E. coli were recently discovered, and accuses the Otago Regional Council of a "panicked'' response to the issue.

On June 15, the testing of bore samples concluded the bacterial count made the water unfit for human consumption without treatment.

An E. coli spike of 150cfu/100ml was recorded in the bores during routine testing. The drinking water standard is 1cfu/100ml.

Bores are sampled every three months.

About 120 affected bore owners were advised of the contamination on June 15.

Peter Whitlock, who has lived at Waitaki Bridge village on the south side of the Waitaki River for 30 years, said as far as he was concerned the issue was a "storm in a teacup''. If the issue was as serious as the regional council claimed, it should have been dealt with "months ago'', he said.

An email to another Waitaki Bridge resident from Otago Regional Council acting resource science manager Jean-Luc Payan, obtained by the Otago Daily Times, said a sample taken on March 3 showed contamination of 5cfu/100ml at a groundwater depth of about 3m.

Mr Whitlock, who has never treated his water, said that showed the most recent elevated result of 150cfu/100ml was not an accurate reflection of the water quality.

"I think the poor fellow that has inherited the job [Mr Payan] has just panicked. There is nothing wrong with it.

"Our real concern is why they left it so long to tell us there might be something wrong with our water supply. If there is pollution in the second pan of water, where our water comes from, like there is in the first pan, there should be questions asked.''

Mr Whitlock planned to take a sample of his water to a Dunedin laboratory to be tested today but he had no intention of treating his water.

In an emailed statement to the Otago Daily Times, Otago Regional Council chief executive Sarah Gardner said the 150cfu/100ml spike was "not necessarily indicative of a consistent reading'', but rather provided a "snap-shot at the time a test was conducted''.

"Any readings over the standard of 1cfu/100ml should be considered a health risk. Even if the reading was 5cfu/100ml, this is over the recommended standard for drinking safety and represents a health risk to vulnerable members of society. Several spikes in the Lower Waitaki Aquifer have been recorded historically.

"However, after consulting the (Southern) District Health Board it was advised it was imperative that we publicise the E. coli concern urgently, in order to protect human health.''

I bet Mr Whitlock would be quick to condemn the ORC for not doing their job if someone got sick because of the water and the council had said nothing.

"Everyone's an expert apparently"
Including Dunners it seems.

Another useless example from yet another useless 'council'.
Taking money in 'fees' and 'consents' to be told what you can and can't do in your own backyard.