Another side of McCahon 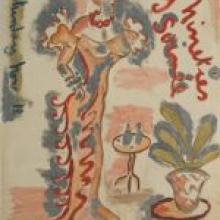 Just when you thought you knew all there was to know about Colin McCahon, the Hocken opens its remarkable treasure chest and reveals more.

Curator Natalie Poland explores McCahon's design work, an important area that has previously been neglected, in this fascinating exhibition.

The influence of graphic design on his art practice has long been acknowledged, but here it is made explicit.

Artworks from the collection appear alongside posters, stage designs, work for publications and jewellery.

One early work that dates from McCahon's student days is a vibrant light-hearted poster for a "Gay Nineties Soiree" at the Dunedin Left Book Club in 1938.

The work was the gift of one of the Hocken's great benefactors, Rodney Kennedy.

Plenty of evidence is provided of McCahon's longstanding interest in the theatre.

The use of colour in McCahon's Swan Lake stage design model is particularly enthralling.

Another interesting story revealed in the exhibition illustrates the pervasive influence of patronage.

McCahon submitted a numeral-based design for a mural for the university.

It was rejected in favour of a work he had abandoned the year before that appeared on the back of his proposal.

The waterfall-themed mural that was chosen is now displayed on the second floor of the university's Central Library.

We owe a debt of thanks to those who had the foresight to retain and eventually donate these works.

As the title suggests, these works would indeed be an antidote for the winter blues.

There is a sense of energy and vigour not often associated with the genre.

She obviously draws inspiration from Cézanne but then departs on a different path.

Fruit takes centre stage, as is so often the case with still life, but less common is the way in which she echoes the bold colours of the fruit in the background.

Stylised foliage behind helps to distinguish background from foreground in these vivid paintings.

Some of the bowls don't look quite right, but the fruit itself is well realised.

In Pears on Tawny Orange, the fruit has escaped its bowl.

It appears to have been carelessly strewn across the surface, highlighting Stirling's confidence in representing the fruit naturalistically from any angle.

The pears have a real sense of mass, as though they could be plucked from the work.

She is clearly an accomplished painter.

Her wide-eyed, predominantly juvenile subjects are steeped in national and international references.

In the focus on family and childhood, her work certainly references Michael Smither's early domestic work.

This is acknowledged by the inclusion of a quote to that effect from Smither, in which he goes on to wish the artist well for the exhibition.

Stylistically their work is quite different.

Smither employs hard-edged realism, whereas Platt is deliberately impressionistic, bleeding one colour into the next.

Blurring around the eyes often seems to suggest a child on the verge of tears.

If the eyes are the windows to the soul, we should be worried about some of the children depicted; there is a hint of malevolence that seems at odds with the superficially sweet scenes of little girls and their dolls.

Smither's domestic works of the '60s and '70s exposed the reality of daily life as a valid subject for art.

Platt, by contrast, seems more interested in the emotional interior.

One of the smallest works, School Girl, is the most successful.

Platt has created a character that appears expressive and thoughtful.

Her more mature subjects, particularly as in Woman with Flower, owe a debt to Modigliani in the treatment of the eyes and the elongated necks.

Platt has found a winning formula, but it would be interesting to see her explore new territory.