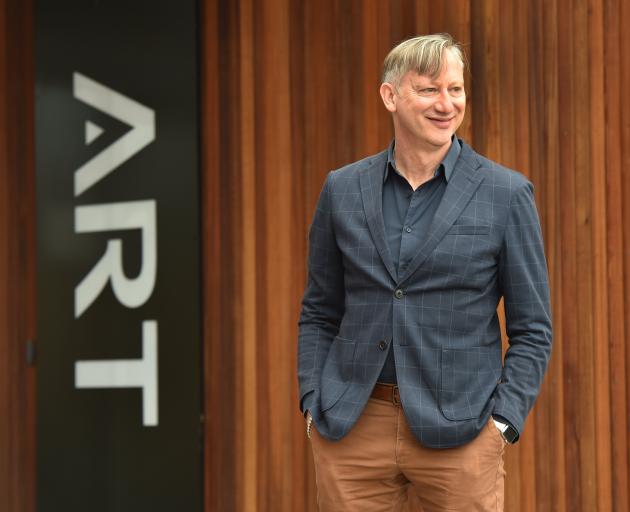 Dunedin's two tertiary institutions, which train many of New Zealand’s future artists, designers and performers, have undergone some major changes in recent times.

Long-time University of Otago teacher and composer Prof Anthony Ritchie has been charged with pulling together the university’s new performing arts school while new immigrant, South African Dr Federico Freschi has the job of uniting Otago Polytechnic’s new college which incorporates the Dunedin School of Art, the School of Design (including architecture) and the Business School.

For the former executive dean of the Faculty of Art, Design and Architecture at the University of Johannesburg, the new department is exactly the personal challenge he was looking for when he decided it was the right time to move outside his comfort zone.

Added to that were the continuing political and social struggles in South Africa.

"I was at a point of my life where I could still make a move."

He was attracted to New Zealand by its environment and space but also by the job itself, coming in to an art school celebrating its 150th anniversary which yet continued to evolve with the inclusion of the design, architecture and business programmes.

"It is a changing world. It is interesting bringing business into a creative environment.

"There’s a lot of interest in business schools around the world in design thinking and how you apply it to a business environment. Design and creative disciplines are fundamentally about the human experience — thinking through concepts and iterations to come up with a working solution — and those skills are increasingly understood as necessary in the business world."

What he did not count on when he signed up was the possible impact of the changes the Government is making to vocation training.

"We’re not entirely sure what it will look like yet but there is a strong emphasis in the new structure on vocational pathways and the polytechnic has been very good at leadership in that space."

He is reminded by a previous vice-chancellor’s comment when dealing with the student protests a few years ago: "Never let a good crisis go to waste."

"The efforts to resolve a crisis can be game-changing."

The polytechnic has a very robust postgraduate programme which while not "front and centre" of the Government’s proposals, is an area Otago Polytechnic could lead in.

"Vocational training is not just about learning a specific set of skills. It is sending students out into the world with a real capacity to do what they need to do."

But his first job has been constituting the college and its new structures and organising the various programmes.

Having himself come from a multidisciplinary background has been helpful. He has an undergraduate fine arts degree majoring in photography and printmaking and a PhD in art history, looking at the political iconography of public building.

He went on to teach art history and on the side studied opera.

"I was dean by day, star of the stage at night."

But as work pressures mounted, he had to give up the singing. His last stage performance was in 2008.

He also took a break from academia to work for the Goodman Gallery in Cape Town, one of the country’s premier galleries.

"It was a chance to step behind the scenes, deal with the artists, attend international art fairs and different galleries. It gave me a very different perspective.

"While it might seem glamorous, it comes down to logistics. It’s about packing, shipping and insurance."

That business perspective gained then will stand him in good stead with the integration of the business department, he believes.

"Artists and designers often have to be entrepreneurs. There are interesting synergies."

He admits the move to New Zealand has not always been plain sailing — it took six months and a lot of money to get his and his partner Neil’s three cats — Claude (a red point Siamese), Mistress Mao (a black Oriental) and Nonsense (an Abyssinian-cross tabby) — here. 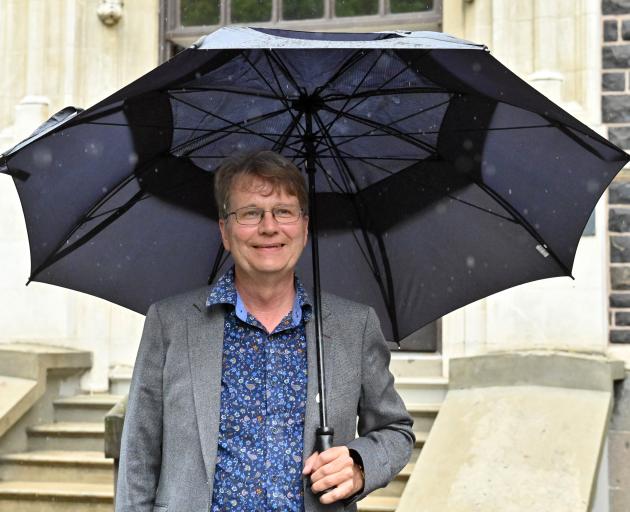 University of Otago head of performing arts Prof Anthony Ritchie will be swapping Marama Hall for new offices in the Tower Block in the old College of Education. Photo: Linda Robertson
They have all settled in a rented house with 180-degree views of the harbour and peninsula and enjoy the "wonderful bracing fresh air" and Dunedin "rush minute" instead of the 35-minute 15km journey in "aggressive" traffic.

"The weather has been interesting but I love a cool climate and it’s a beautiful city."

The different time zones have also taken some getting used to when it comes to continuing collaborations with people in different countries.

The city’s commitment to arts and culture has impressed him.

He hopes to draw on that for the college’s celebrations of the art school’s 150th — an important milestone for the entire city, he believes.

The school started out based in arts and crafts helping people learn skills that could build the city.

"It taught a vocation pathway from the outset and 150 years later we are still doing that."

Prof Ritchie faces similar challenges bringing together the music, theatre and dance programmes under the School of Performing Arts banner while also overseeing a move to new arts facilities at the refurbished College of Education site.

The departments have been spread across six sites on the university campus.

"I’m now responsible for the governance of the school, keeping staff and students happy. The role requires a lot more administration and people work."

It is a "big step up" for Ritchie who has been a member of the music department for 19 years and became a professor in 2017.

He came to Dunedin in 1988 as a Mozart Fellow and, like many artists, ended up staying in the city.

Back then, he was a freelance composer and musician who did casual teaching and enjoyed the freedom of that.

"It was a good change. I enjoyed sharing my skills with other people and was ready to do something different."

He will juggle those responsibilities with his own work as a composer. Working at the university has allowed him to work on his composing without commercial pressures as well as share his skills.

"I’ll have to squeeze that into more compact time units. The university is very supportive of heads maintaining time to do their own research.

While he did not start out in academia with the aim of getting into management, in recent years his interest in the roles has grown thanks to an induction course run by the university.

"I didn’t see myself as a leader. But it’s all teamwork, really."

The $26million project of building a new two-storey recording studio and refurbishing existing buildings showed the university’s confidence in the future of the performing arts, he said.

"It’s encouraging for us. It’s an exciting time."

Marama Hall, the "face" of the old music department will be retained as will Allen Hall, the home of the theatre programme but all the academic offices will move down to the newly refurbished "tower block" this year.

He has a vision for a vibrant and diverse school that is strong across all of its disciplines.

"We’ll continue to do what we’ve been doing as well as grow the school."

Ritchie hopes parents and pupils see the benefit in pursuing an arts education.

"It’s not a nice-to-have, it’s essential to our lives and there are good careers to be had from that."