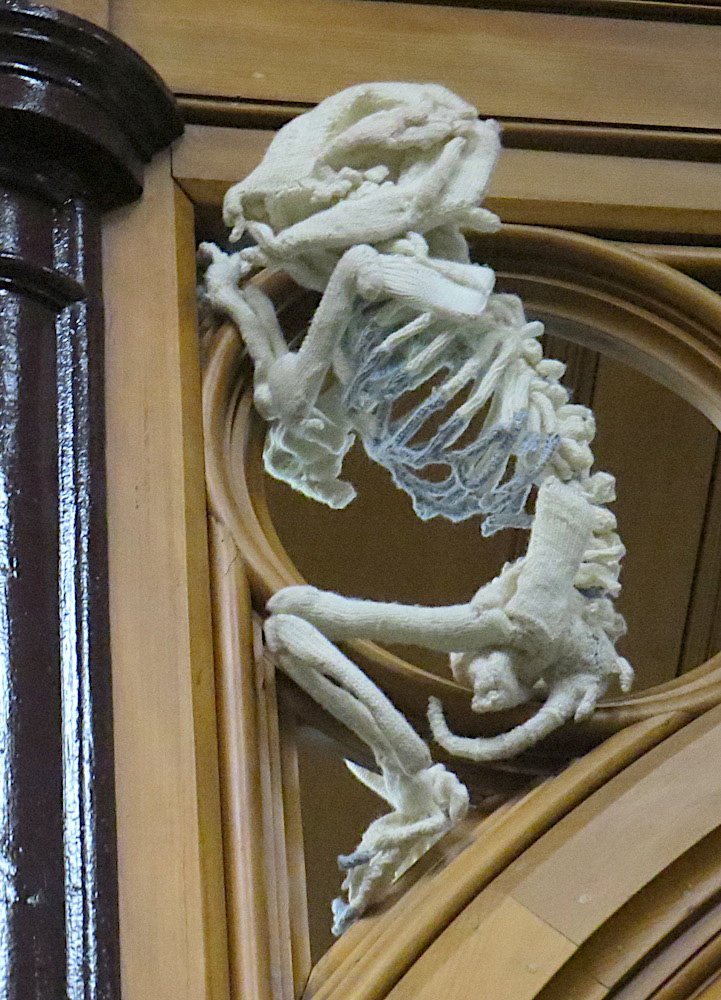 Nestled deep within the Otago Museum, the Animal Attic is museum as museum piece. Reeking of Victoriana, its hoard of zoological treasures is the perfect setting for Michele Beevors’ "Anatomy Lessons".

For years, Beevors has used knitting as a relief from the stresses of an out-of-balance world, in which humans seem determined to exploit "useful" animals, and to push any other species towards extinction. In "Anatomy Lessons", the artist presents life-sized skeletal animals, knitted in yarn over a sturdy framework. Each is modelled on a real animal, and each tells a story of a creature thoughtlessly killed or a species on the brink of disappearance.

The works range in size from an army of frogs to giraffes, each accompanied by information about the particular subject: abused circus animals, animals shot as hunting trophies, animals endangered by loss of habitat. The works are presented mounted on telling stands — a giant plastic scallop reminiscent of an oil company’s logo, a ball as used by a sideshow performer, or a large hunting net. The works are rendered more poignant by the ironic use of wool, the product of a farm animal whose proliferation has come at the cost of wild habitats. The deliberate presentation of the works next to the taxidermied "Lawrence Lions" is also significant. 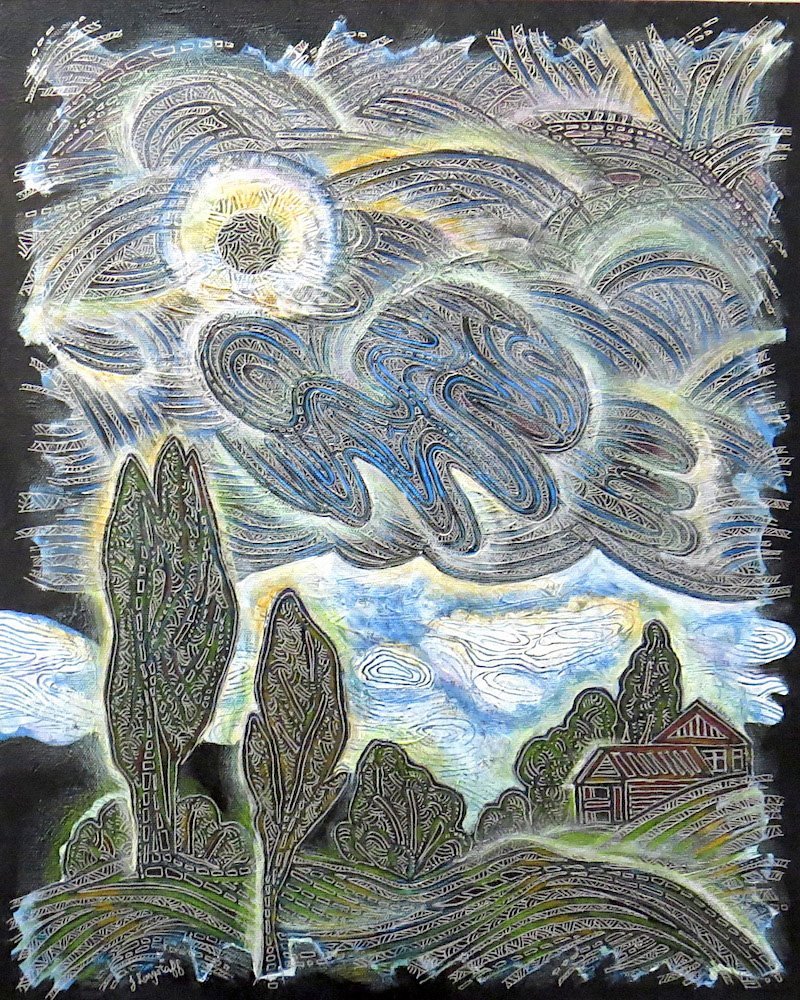 A trap that is easy for any artist to fall into is to find a single style and then stick to it. While the concept is good, it can lead to the sensation or perception of being in a rut, and for that reason experimenting with new ideas and styles is essential.

Jenny Longstaff has reached the point in her artistic evolution where the turmoil of the current world has encouraged her to break out of her established structured style and experiment with a spontaneous, more abstract approach. In her current exhibition, the artist presents works of both types, plus numerous pieces which straddle the gap between the two.

Longstaff’s more realistic images comprise landscapes painted in soft, almost pastel tones. The land and trees are blurred gently in paintings such as Mist in the Eucalypts and the almost sensual cloudscape Evening — Coastal Clouds. At the other extreme, bold, bright representations of water swirl attractively like paisley stained glass or heavily dyed biological microscope slides.

Perhaps the most intriguing works lie at the borderline between the two styles. Longstaff’s background in illustration comes to the fore in images of autumn leaves, and the impressive Valley Fog Remnant evokes Van Gogh’s Starry Night with its strong, complex patterning and almost engraving-like quality. 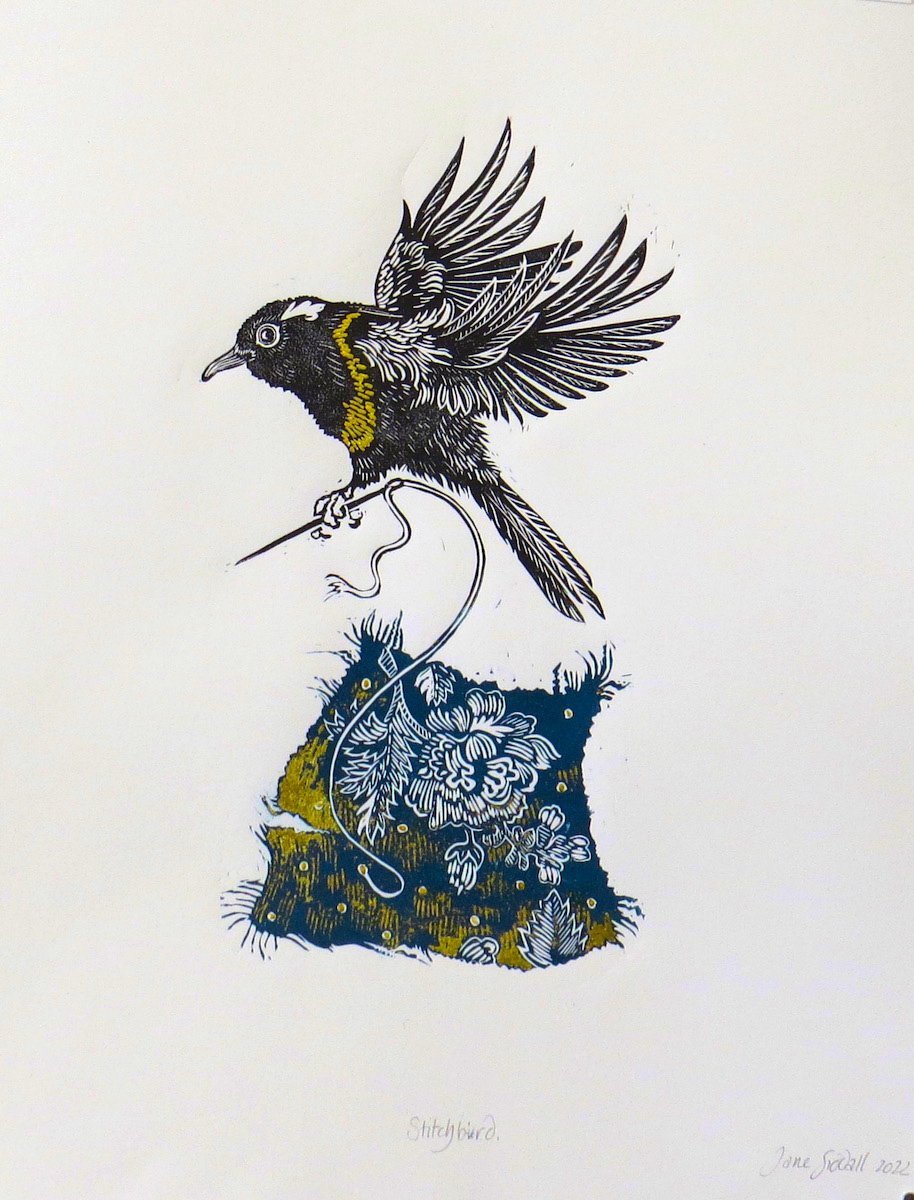 Jane Siddall and James Sutherland have produced an intriguing joint exhibition at Pea Sea Art. A series of Siddall’s linocuts in bold inks and metallic tones is counterpointed by a small group of oil portraits by Sutherland.

Siddall’s prints are stylish, intricate pieces in which the artist delves deep into a personal symbolism filled with animals and hypnotic patterns. The images are cleanly and clearly presented, the majority composed of two or three juxtaposed items presented against a plain white background.

Gold and copper glint from the works, brightening the predominantly solid dark colours of the inks. The same symbolic items appear within several of the works, with hearts, hares, and moths recurring around the gallery. The combinations and permutations seem to suggest some hidden narrative or connection within the images, possibly the interpreted/misinterpreted myths of the exhibition’s title. The meanings of the combinations, if there are any, remain elusive, though the pictorial compositions and juxtapositions are attractive.

Siddall’s prints are offset nicely by Sutherland’s strong portraits. While the portraits’ subjects are excellently depicted, it is the backgrounds that capture the imagination, enhancing the personality captured in the faces. In works such as Messenger and Storm Chaser these backdrops add an important extra dimension to the characters presented.