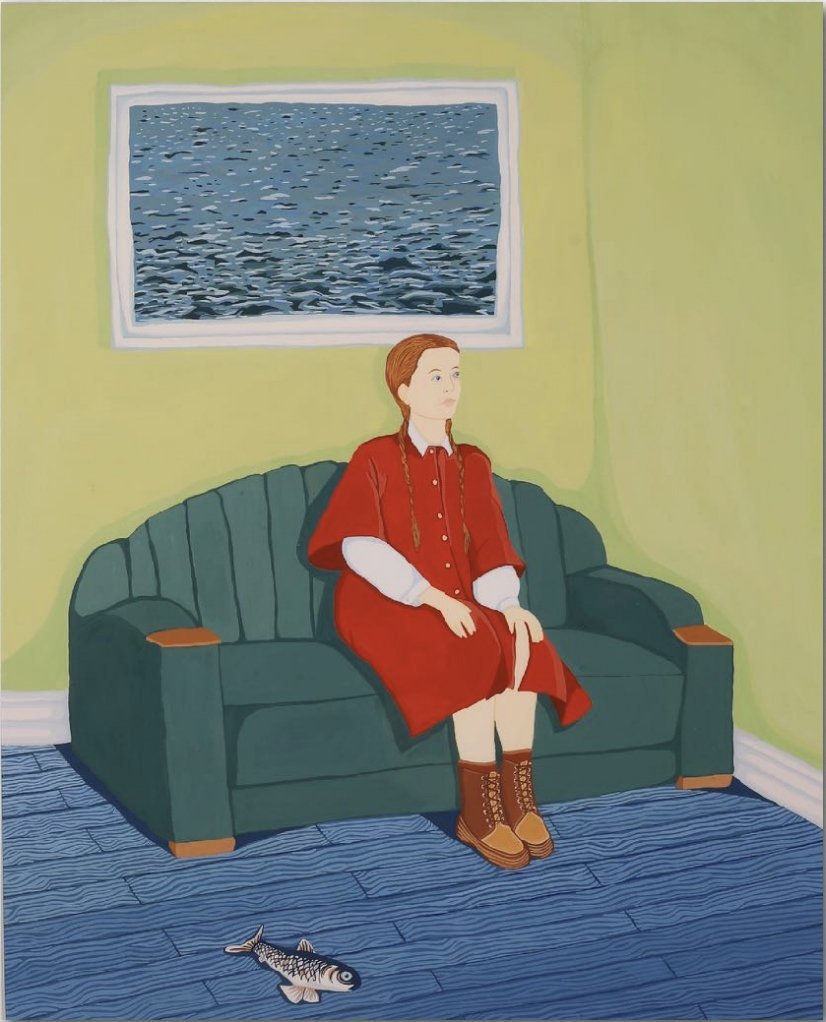 Shifting Channels brings together eight artists who are primarily based in Otepoti Dunedin (with the exception of Wesley John Fourie), and who, to varying extents, can be described as emerging. Hemi Hosking-Kereopa (Ngati Tahinga, Tainui, Awhirio) and Pippi Miller are both undertaking postgraduate study at the Dunedin School of Art and have exhibited previously at RDS, while Hana Pera Aoake (Ngati Hinerangi, Ngati Mahuta, Tainui/Waikato, Ngati Waewae) has exhibited widely, including at Artspace Aotearoa in Tamaki Makaurau Auckland.

Beyond these broad organising parameters, textile works, including Fourie’s multi-fabric collage on woollen blanket, Taarn Scott’s pencil on fabric and chain hanging work, and Aoake’s use of weaving materials such as ti kouka (cabbage tree fronds) and pingao (sedge) figure prominently. Alongside these textile and multi-media artworks are monoprints with gouache (Troy Butler), works on paper (James Thomson-Bache), concrete and steel sculptures (Prudence Jopson), gouache on paper (Miller) and silk screen prints (Hosking-Kereopa). Despite the disparate mediums, one of the conversations taking place between all of the works involves the ways in which the "non-textile" works seemingly reach for their textile-based companions. Hosking-Kereopa’s silk screen prints, which are influenced by tivaevae (quilting) and depict symmetrical grids composed of floral and geometric forms are perhaps the clearest example of this relationship.

By expanding the English source wood "text" (textile) to include texture, the two-dimensional wave-like patterns on the floorboards in Miller’s painting travel in two directions at once: wood grain and ripples on water. There is also a fish and a fruitfully uncertain ocean/ocean painting on the wall. 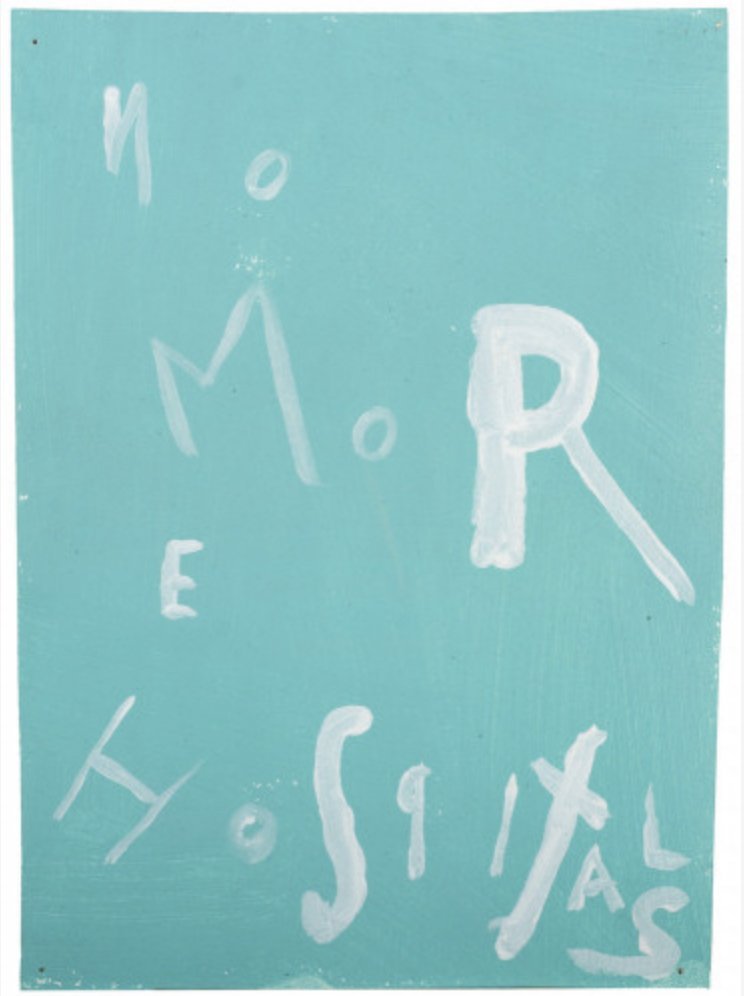 Ruth Buchanan (Te Atiawa, Taranaki, Pakeha) is one of the five artist-curators invited to work with the extensive Jim Barr and Mary Barr collection of contemporary New Zealand art. Buchanan, in her practice as an artist, is interested in the impact of ideological structures on society. According to the exhibition’s "ideology" (its textual framing), her specific focus is the (uneven) "politics of care." Given the artist’s interest in ideology and its manifestations, how might the politics of care become apprehensible to a gallery visitor who has not read the framing text? This question and approach correspond mimetically to the artist’s interrogations of ideology.

Two works orient the visitor to the hospital as a site of potential care: Giovanni Intra’s small, text-based work on paper that reads (as per its title) No More Hospitals (1995), and Buchanan’s own work, a long, blue-green silk curtain titled Split, splits, splitting (2019). Pulled along its runner to bisect Buchanan’s selections of work either side, the curtain performs itself to provide a measure of privacy and protection within the uncertainties of medical treatment. Beyond the hospital, Marie Shannon’s photograph The Dream House (1989) depicts a maquette of a happy (dream?) home with a welcome mat and ambiguously centres family as a source of care. The reaching hands with nested insects and bodies supplicant and powerful in Shona Rapira Davies’ (Ngatiwai, Ngapuhi) large ink on jute canvas work advocate human-nonhuman relationships. Peter Robinson’s (Kai Tahu, Kai Kuri) binary code of zeros and ones appears disembodied but the title Everything Affects Everything (2000) suggests otherwise. 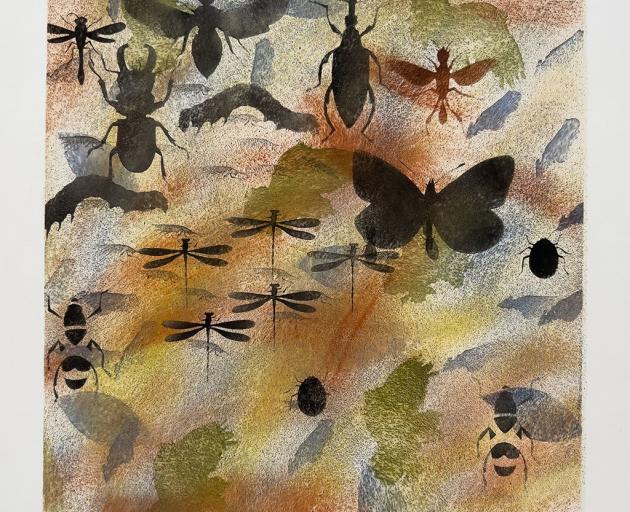 Multiplicity is an apt title for Richard Killeen’s teeming canvases of insects, birds, fish, animals, stylised human forms, geometric shapes, and objects that span domestic teacups to large aircraft. It is also an accurate descriptor of the artist’s profuse databases of typologies (insects, for example), of his ongoing process of collecting and mutating new database entrants, of his seemingly endless combinations and compositions of typologies, and indeed of the artwork’s orientation (it can be installed on any of its four sides).

One of the highlights of this current exhibition is the inclusion of four works from 1977. These particular works are pivotal in the development of Killeen’s signature style as they document (now, from an historical perspective), the artist’s transition to forming grids with the typological beings. They are incredibly warm works, not only in terms of colour, but through their materiality (oil stencil on enamel and sand), and, at the risk of fetishising the "hand/aura of the maker," their very handmade status.

Of these four works, Untitled (1121) depicts beings from the insect world such as moths, dragonflies, and beetles. They appear to move as a collective albeit at their own paces over textured, almost stippled areas of ochres, reds, and light greens and blues. There is also the warmth of insect bodies not so much huddling together but simply existing and taking up space. It would have been uncommon if not unfathomable in 1977 to imagine a world full of small insect holes and absences some forty-five years later.