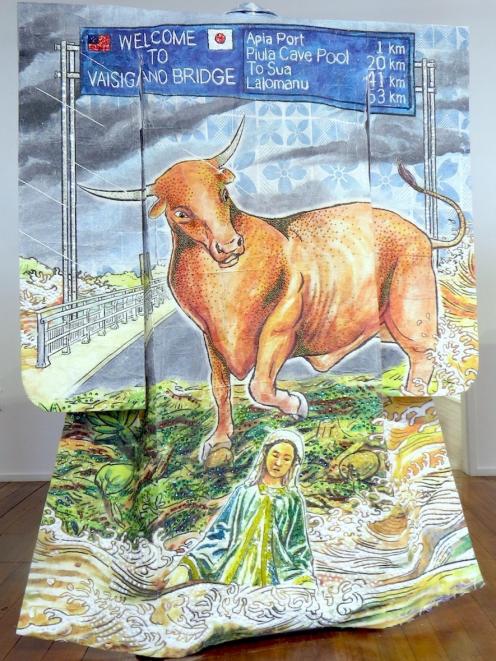 More importantly, the images examine and challenge Samoa’s position at a point where island tradition is often at conflict with Western and colonial incursions. Traditional customs exist in an uneasy balance with global influences and effects such as capitalism, pollution, and climate change. In Kihara’s art, we see the island shores inundated with a tsunami of these waters of change, and forests and soils bulldozed away. The golden bull of capitalism stands triumphant over the more traditional values associated with religion (represented, ironically, by Christian iconography, itself a Western import).

The series flows (literally and figuratively) from the earlier "Vasa (Ocean)" kimonos, which are presented alongside the current works. In these we see that — in a further nod to Japanese tradition and art — the tsunami’s depiction is a direct nod to Hokusai’s Great Wave, possibly Japan’s most famous traditional artwork. Kihara’s intention is to produce further series which will add to the overall work to create a unified panorama. 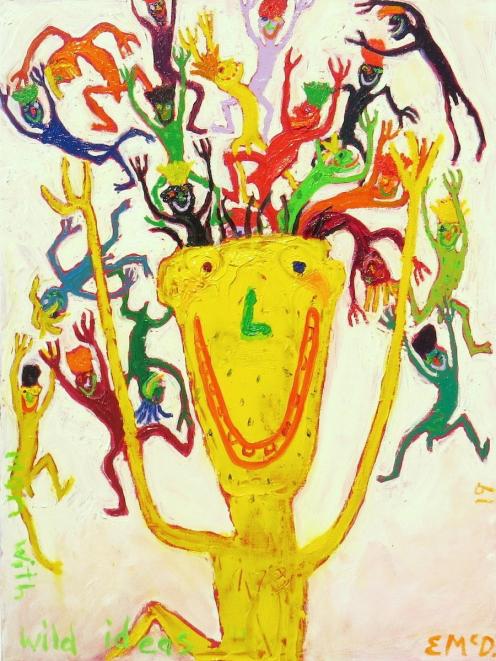 Ewan McDougall's paintings are some of the most instantly recognisable of Otago artworks. The Broad Bay artist’s happily feral stick figures, painted in lurid tones against plain, often dark, backgrounds, are vibrant, gleeful examples of primitivist expressionism, with characters engaging in their never-ending party of life as viewed through acid-tinted glasses.

The current exhibition takes all the elements of McDougall’s art and ups the ante through the wonders of modern technology. The artist’s figures have been digitally animated and placed within a virtual reality space by Claire Hughes. With the use of VR goggles, viewers can find themselves surrounded by McDougall’s insanely and inanely dancing figures, or standing in rippling waters as the characters of Out Th’Back’s good ship D.J.L. go sailing by.

The effect is exhilarating yet unnerving. Seeing the figures come to life is a joyful experience, but being trapped in their universe, following its unlikely rules, can leave one feeling disoriented. The overall effect is positive, however, and the collaboration between McDougall and Hughes, accompanied by the soundtrack of Isaac Lundy, is one that is likely to leave the viewer with a grin as wide as that of one of McDougall’s multicoloured party-goers.

Lucy Eglinton is the latest artist to add to The Artist’s Room’s impressive list of painters of magic realism. In her first South Island exhibition, Eglington has presented a series of works in oil and watercolour showing unlikely "unnatural" symbioses of birds, mammals, and insects. 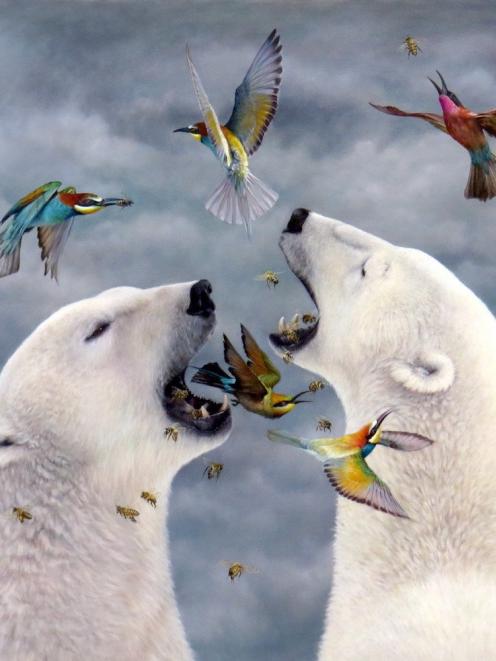 Birds and Bees, by Lucy Eglington
Several of the pieces take the symbiotic idea to the point where there seems to be a deliberate theme of cooperation and companionship between diverse groups. This perhaps reaches its culmination with the watercolour Indifferent Shores, which also has a strong message of hope in the face of climate change in its image of a coalition of small mammals being carried to the safety of a distant shore by a swimming polar bear.

The depictions are sumptuously made, and — within the limits of their strange collaborations — true to life. There is a richness to the oil works, which range from the dynamic Birds and Bees and the epic "group portrait" of After Aesop to the gentle cameo of Lost and Found. Also impressive are the watercolour works, deliberately created in a style echoing early scientific illustration, and quite possibly influenced by the seminal wildlife images of James Audubon.

There is no one stand-out work in the show, all the pieces being of equally high quality.