Moray Gallery is easing into the year with a short series of one-week exhibitions. One of those is "Picnic", an interesting collection of work by John Z. Robinson.

The works are in two media, and feature three of Robinson’s best-known themes: flowers, male nudes and townscape. The nudes and townscapes are drawn and painted on hardboard surfaces washed lightly in gesso, allowing some of the colour and texture of the base to show through. The flowers are created through a less traditional medium, drawn on computer tablet and then printed as giclee prints.

The flowers add a bright touch of colour to an exhibition otherwise composed mainly of muted colours. There is an exuberance to these works, and they bookend the graphite and paint works nicely. It is the painted and drawn works, however, that are largely the stars of the show.

The urban landscapes, accompanied by one still life, are very nicely drawn, busy without being overpowering, and with a skewed perspective which suggests the influence of early 20th-century German expressionism. The same distorted building frontages form the backdrop for a series of nude groups, deftly drawn using a minimum of line to suggest, rather than explicitly show the scenes. 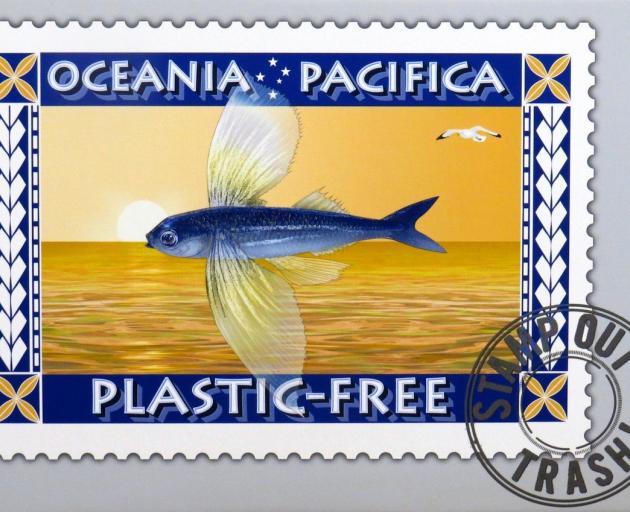 Terry Fitzgibbon is a multi-faceted talent. Although exhibiting here as an artist, he is perhaps better known as a writer and illustrator of children’s books. Some of the styles and subjects of this vocation clearly spill through into the art on display at Pea Sea Art.

The works, limited-edition prints, largely comprise two themes: New Zealand shoreline scenes and more abstract works, several of them using traditional Maori and Pacifica motifs. There are a handful of works which do not fit within either of these main themes, notably the fantasy-inspired Estralita Dance and strong, stamp-shaped Plastic-free Pacific.

Flying birds are a frequent element in the shoreline images, which are largely created in a deliberately simplified style and sureness of line which reveal the artist’s illustrator origins. These works are tranquil, and largely created in pastel tones. Only occasionally, in works such as Tui in Paradise and Kereru Over Otago Peninsula, are the colours ramped up to suggest more dynamism.

Many of the intriguing semi-abstract works use the circular form to good purpose. Tint and shade are also well used to suggest a three-dimensionality to Manapou (Sustaining life) and Kowhaiwhai. The strong colours of Summer Swirl and subtle depths of Pitau (Fresh fronds) are also pleasing. 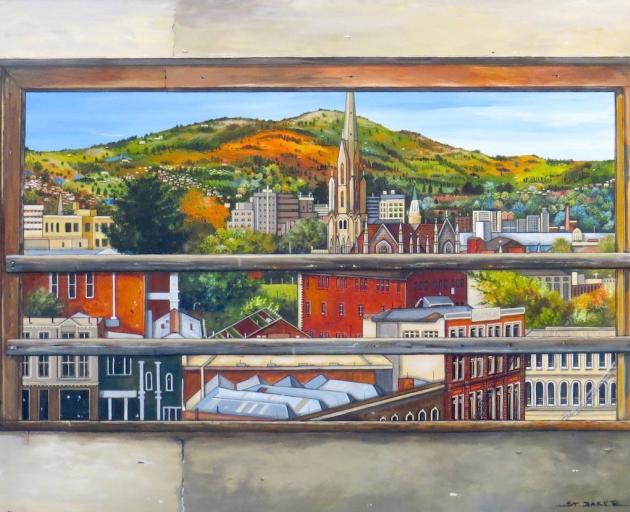 Jo St Baker has been largely absent from the Dunedin art scene for the past few years, during which she was based in Queensland. Her welcome return to the city, and to her old haunts of St Clair and St Kilda along its southern coast, are celebrated in the exhibition "Scape" at The Artist’s Room.

St Baker has employed the strong colours of acrylic well in the creation of these works on paper. Their slightly exaggerated nature adds a slight sense of unreality to the scenes, yet also makes the viewer perceive them as if the city is sitting in the warm glow of a summer’s evening. For several views of the central city, such as City Scape and Otepoti, the artist has used the lovely conceit of picturing the scene as through her studio’s roof-top window, creating a slight trompe l’oeil feel.

In the coastal scenes, it is the horizon which defines the scenes, dividing the images between sky and sea. A similar dividing line is used between sky and townscape in Blue Roads, Otepoti and The Hydro. In all of these works, this halving, coupled with a deliberate emphasis on items in the near foreground, adds a strong and effective sense of depth to the images.