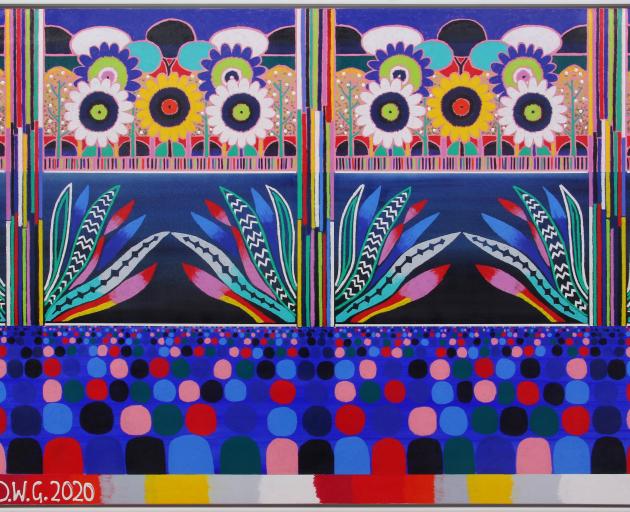 Monet painted water lilies from 1897 to his death in 1926. Famously they absorbed him and equally famous was his intent to capture on canvas the absorption of light by leaves, flowers and water. The title of Darryn George’s current exhibition "Water Lilies" and two of its paintings acknowledge the similarly serial nature of this body of work, which follows on from Mara in 2019 (also at Milford). Both "Mara" and "Water Lilies" take as their subject the Garden of Eden story, which is common to several religions, including Christianity.

The narrative arc begins with abundance and results in expulsion as punishment for transgression. Given the exuberant colour and beauty of schematic flora such as plants, trees and flowers, it is plausible to locate these paintings in the opening trajectory of abundance. However, the multiple and regular lines of people standing side by side seem regimented as they face a vanishing point in the bottom third of each painting. If there is joy, it is muted; if there is flourishing, it seems distant. The silent throng of people are reminiscent of scenes from the film Metropolis (1927) rather than those enjoying the fruits of the garden. Perhaps then, the apparent distance, or "looking on longingly" signals the last stage of the narrative, and the profusion of flora is a willed collective memory. In "Water Lilies" the garden the people look towards is divided into four sections or enclosures, seemingly atomising people and nature. 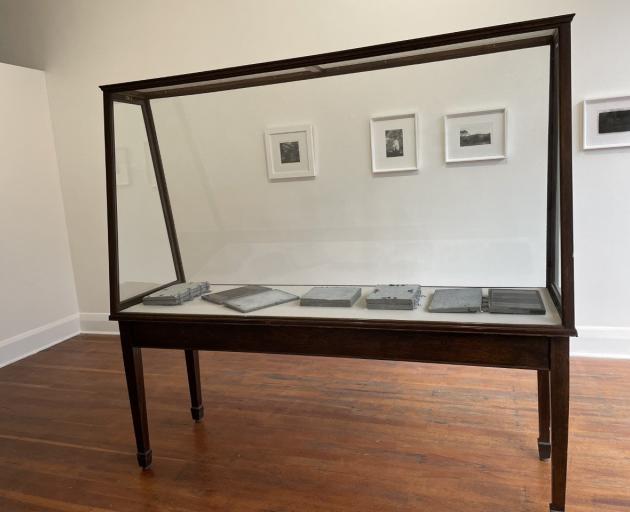 The loss of friendship is frequently overlooked in Pakeha or Western cultures and as a result there is a corresponding absence of "acceptable" levels of grief or protocols for memorialising. Jenny Hjertquist and Dallas Robertson’s exhibition "Engraved: your books, my photos" is notable for acknowledging the significance of friendships lost and for the ways in which it formally embodies this loss.

The materials (concrete, chains), imagery (tombstones, blanked-out faces, black voids), and titles (blank, Gwaedu ["bleed" in Welsh]) are all refreshingly, to use another title "candid". Despite the literal heaviness of concrete sculptures, and photographs of tombstones and grave yards, and a stunning antique vitrine, the exhibition nevertheless avoids being heavy handed. In the attempt to figure out how well-worn subject matter, such as tombstones and graves, could be reworked anew, I reached the tentative conclusion that the role of collaboration is key.

On a conceptual level, the collaboration between Hjertquist and Robertson itself suggests, if not celebrates, that healing and the development of new friendships are possible. This manifests at the level of materials as the juxtaposition of heavy concrete (Hjertquist’s "lithic sculptures") with light photographs (Robertson’s silver gelatin prints). The physical lightness of the photographs offsets the weight of the concrete, and the blank slabs of concrete counter the heaviness of the imagery. This is particularly evident in the most clearly collaborative works: a suite of three sculptural works where resin unites concrete and photograph. 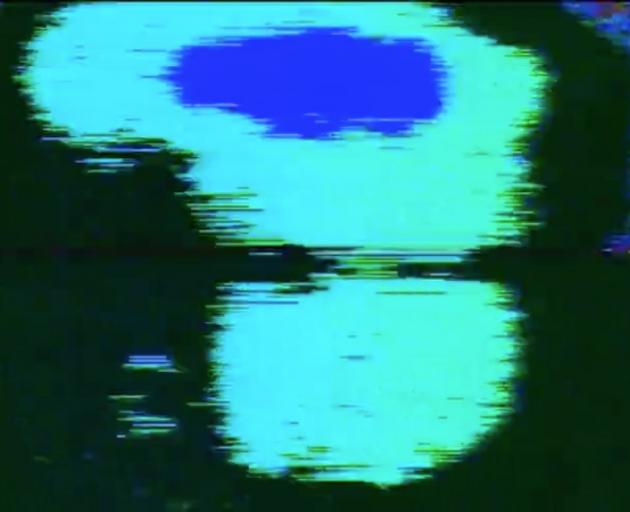 Visual Music, also known as “Colour Music” is, as artist Michael Nicholson (1916-2017) described it , “work for the eye, not the ear”. Nicholson’s TheVisualMusicProjectStage3Ops1-4 (1977/2008) is a 42-minute digital video work that had its origins in early intermedia technologies; in this instance a Scanimate Video Synthesizer (SVS) interfaced with a computer. The SVS seems to involve a wall of analogue control panels and cathode ray screens.

The visual music Nicholson created with this technology comprises restless, multi-coloured striations, pulsations, and waves of neon-bright colour that variously oscillate, expand and blur. Although this is music for the eye, the temptation to imagine it as sound is compelling. If Len Lye’s experimental moving image works could be described as a type of scratchy, arrhythmic, scat jazz, Nicholson’s swarms, amoebae, and rashes of brilliant colour edge towards a dissonant, industrial sound haze, despite the pop art palette.

Nicholson cites the Russian/German group Der Blaue Reiter (The Blue Rider), which was active in the years preceding Nicholson’s birth, as the inspiration for TheVisualMusicProject. Presumably, this is in response to Der Blaue Reiter’s interest in the fusion of art and music, particularly in the work of the group’s central figure Wassily Kandinski, and more generally to the artist’s heightened use of colour (especially evident in Franz Marc’s paintings). Given the burgeoning technology of the late 1970s, it is interesting that Nicholson chose to look back. 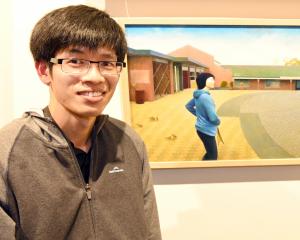 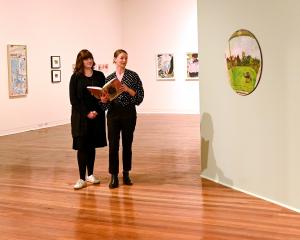