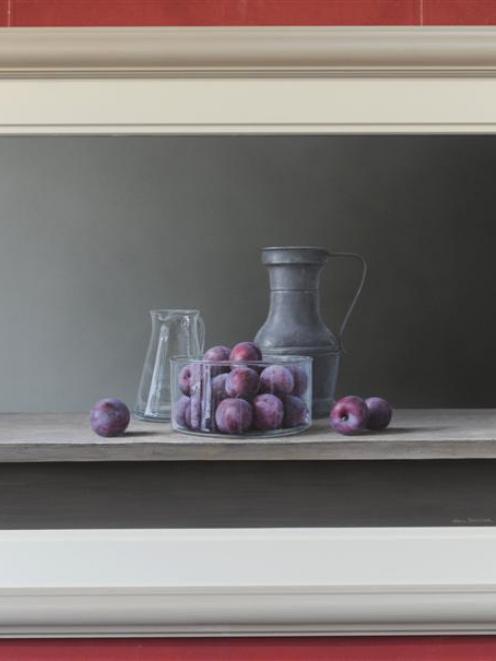 Plums in a Glass Bowl, by Neil Driver.
Chanelle Carrick reviews the latest exhibitions from around Dunedin.

The latest collection of paintings by Neil Driver on display at the Artist's Room demonstrates his characteristic realist style in a series of still lifes, interior scenes, and landscapes.

Driver's use of a muted but naturalistic colour palette and uncluttered compositions gives these works a quiet, contemplative feel.

In Bay Window to the Sea, for example, the viewer is presented with a calm ocean seen from within an empty room.

The lack of any objects or distracting details allows the viewer to immerse themselves in the scene, which evokes the sounds and smells of the sea.

Similarly, Driver's still-life images focus more on the relationships of objects to each other rather than their specific purpose.

The work Plums in a Glass Bowl clearly reveals the artist's ability to render a variety of textures.

Here the solid grained surface of a wooden tabletop is contrasted to the waxy texture of the plum's skin and the delicate transparency of a glass jug.

Driver's images contain no people; his landscapes and rooms are empty, and his collections of fruit untouched.

Instead of suggesting the presence of others, he invites his viewers to pay closer attention themselves to the beauty found in everyday forms.

Craig Fletcher's series of limited edition ceramic relief works at The Artist's Room contain a sense of solidity and movement which belies their medium.

Depicting a range of wildlife, such as pukekos, seagulls, and a playful seal, these works demonstrate Fletcher's ability to create a range of textures through the manipulation of clay and the application of colour.

From a distance these works appear two-dimensional.

On closer inspection, however, the relief effect is surprising and effective.

In Dozing Above the Wrack, for example, the initial flatness of the image gives way to the distinct forms of rounded beach pebbles, lengths of seaweed, and the rounded bodies of gulls.

In the striking work Kingfisher, Fletcher expertly describes the soft edges of the bird's feathers using only subtle marks in the clay over which he has hand-painted a brilliant turquoise colour.

Using a different form of mark-making, Fletcher contrasts the texture of the feathers with that of the branch on which the kingfisher sits, which appears gnarled and rough in comparison.

As with Kingfisher, these works all have a unique tactile presence.

Their varied surfaces and pure colours are highly enticing, and give the impression that the creatures within could at any moment come to life.

"Against the Grain", Blue W Black (School of Art Gallery)

"Against the Grain" is an exhibition of sculptural work that incorporates a range of media, including ceramics, wire frames and hanging panels.

These works are highly evocative of both human and not so human forms.

One piece, for example, consists of a decrepit wire-frame bed elevated on tall and rusty metal poles.

Hanging from underneath the bed's frame is a collection of amorphous and organic-looking forms, each glistening as if wet.

The work casts an eerie shadow on the gallery wall, heightening the sense of unease stirred by the unidentifiable figures.

A cluster of thick ceramic discs pierced with deep holes hangs on one of the walls.

Covered with viscous glazes in multiple colours, these highly tactile forms resemble other bodily features such as arteries as seen close up.

Emerging from the lurid green and orange surface of these works, the faint hint of jumbled bodies and mask-like faces is present.

These apparitions are interrupted by large gashes or cut-outs in the surface of each panel which further evoke anatomical forms.

This exhibition constitutes a strong collection of postgraduate work that demonstrates the artist's formation of a signature style.