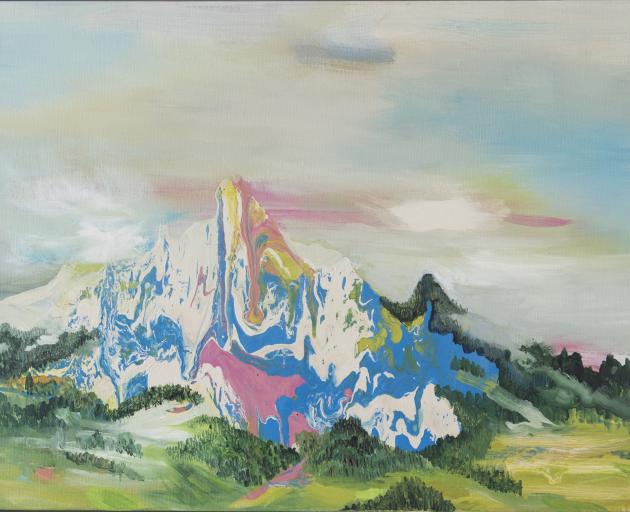 ''September'', at Eskdale Gallery, is an opportunity to revisit some favourite works that have been exhibited earlier in the year and, in one instance, to view a new work, a diptych by Dunedin artist Jay Hutchinson.

Murray Eskdale has selected a broad but complementary selection of work that provides a taste of the gallery's eclectic aesthetic.

This vibrant exhibition includes painting, mixed media (paint and embroidered canvas), framed pastel works on paper and collage works. The two collage works by Tom Mackie were included in Eskdale's recent graffiti exhibition, which I unfortunately missed, so it was good to have this reprieve.

Mackie works with found materials, and puns on his process of cutting them by playing with negative and positive space that he subsequently draws and doodles on.

In one instance, a collaborative painting by Scott Flanagan and Anet Neutze had recently been shown in a group exhibition at

Blue Oyster, and it was interesting to note how Still Waterings P.G responded to the different light conditions at Eskdale Gallery. Flanagan and Neutze's painting is one of three large works on the long wall at right angles to the door.

Despite the large scale and bright palette of these three works (including Hutchinson's diptych), the ''quieter'' pastels on paper by Philip Madill, and Tom Mackie's collage assemblages more than hold their own. 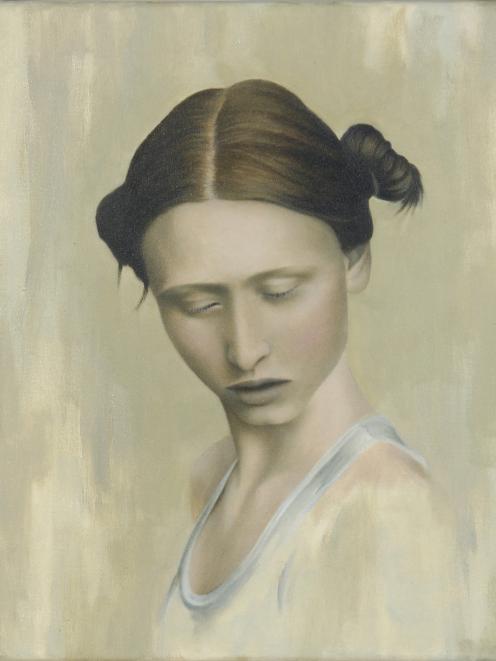 Curated by Lisa Wilkie and Vanessa Jones, ''Southern Gothic'' is an impressive exhibition that pivots on the flexibility of ''southern'' to encompass the Antipodes and a specifically Otago landscape. The multiplicity of the term enables Wilkie and Jones to include artists Lisa Reihana, Yuki Kihara and Ann Shelton alongside Grahame Sydney and Ralph Hotere.

What makes this exhibition stand out - particularly in the context of a dealer gallery - is the curator's willingness to include a number of works that are already housed in private collections, and are therefore not for sale. While the purpose of a dealer gallery is to sell art, these not-for-sale works demonstrate a commitment to the curatorial premise ''Southern Gothic.''

As a perennially favourite theme, this exhibition provides some experiential encounters with a variety of uncanny works. The spatial pairing of Hotere's sculptural work Port Chalmers Chair 1997 with Neil Dawson's large, wall-based horizontal spike (Spirit 2014) is one such unsettling bodily encounter.

Beyond this sensory juxtaposition, Reihana's video lightboxes, and Kihara's video and large photographs broaden the historical European frame implied by the term ''gothic'' to include Maori and Pacific world-views. In addition to the relationships between works, Heather Straka's painting of a woman's introspective focus (The Turn 8 2017) perfectly captures the sense of interior disquiet. 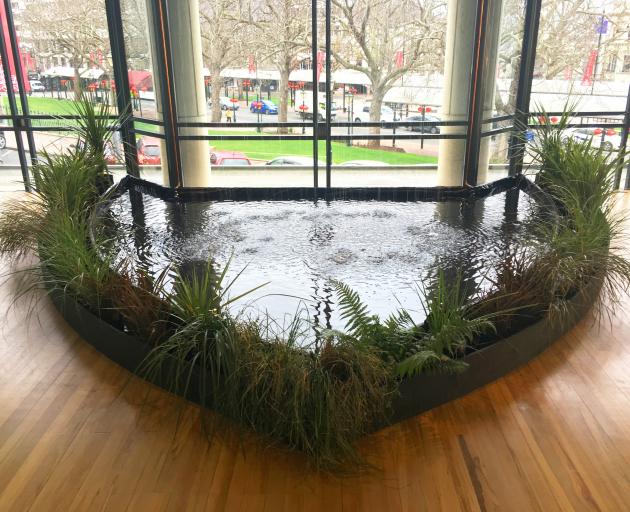 Aroha Novak's installation ''Cascade'' is one of four exhibitions commissioned by the Dunedin Public Art Gallery as part of the ''DPAG Biennial Contemporary Dunedin Programme''. As the title suggests, the focus is on contemporary art by artists living in Dunedin.

In this review I will look at Aroha Novak. Regular Otago Daily Times readers may already be familiar with Arts editor Rebecca Fox's interview with Novak, in which the artist describes the challenges involved installing a waterfall and pool on the first floor of the gallery.

The results are impressive. Novak's waterfall appears to function as a self-sustaining ecosystem in which water from the pool is cycled upwards to be released as a soothing spray via holes in a copper structure, before returning to its original source. Taking the shape of a leaf tip, the pool with waterfall above is positioned in front of the large windows that overlook the Octagon.

With this positioning Novak has taken advantage of the gallery's architecture, effectively making two large concrete columns function as a backdrop to her work. It is as if the original materials of the concrete have been returned to their natural state.

The pool is framed by ferns and grasses that draw sustenance from the water and light. ''Cascade'' speaks back to William Hodges' painting [Cascade Cove] Dusky Bay (1775).