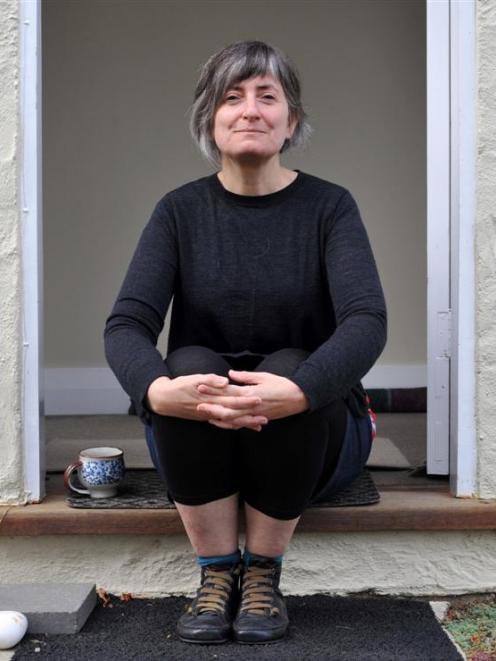 In taking on a project linking St Kildas in Scotland, Melbourne and Dunedin, Deirdre Nelson has discovered there was no saint. Photo by Gregor Richardson.
St Kilda, the romantic, now uninhabited Scottish island, has several namesakes, including in Dunedin. Charmian Smith talks to Deirdre Nelson, who is working on a project connecting them.

Scottish artist Deirdre Nelson has been staying at the Caselberg Cottage for the past few weeks researching St Kilda for a project she is doing on three St Kildas, in Scotland, Melbourne and Dunedin.

She grew up in Ireland but studied at the Glasgow School of Art, graduating in 1992 in embroidery and woven textiles.

Now based in Glasgow, she says textiles are important because, whether we are interested in art or not, we all wear them, sleep in them or sit on them.

''I specialised in embroidery in the widest sense. At the time I was doing a lot of experimental work. I'm much more traditional now, which is funny as time has gone on,'' she said.

However, rather than work in the seclusion of a studio, she wanted to do community work and work with people in some way.

For about a decade she taught and worked in the field of arts and health, in schools and with people with learning difficulties.

Since Nelson returned to making art full-time and established her own practice, a lot of work has come out of her experience in working with communities.

''Recently I've been doing a lot of artist residencies. I go to a place, a community and make work related to that experience or place.''

Much of her recent work has been with communities on the Scottish islands, like a recent one on the Isle of Mull.

Often these topics are so broad she finds it hard to come up with something, she said.

On Mull she talked to people about their lives and jobs and created work for each person: Lithuanian-style wrist warmers for a Lithuanian girl who worked in the cheese factory and often felt cold; a hi-vis messenger bag with a band of Latvian embroidery for a Latvian woman who worked in a bar, was a volunteer firefighter and organised fundraising marathons; blinged-up headphones for a woman who loved dancing although her husband didn't; embroidery on a shirt for the postman whom the locals called Elvis, although he thought he looked a bit like Morrissey.

At the end there was an exhibition called ''Blow-in Bespoke'' featuring all the works she had made, she said.

As a conceptual artist, she works from ideas rather than having a specialist technique. She learns new techniques if she needs them, like Latvian embroidery, she said. 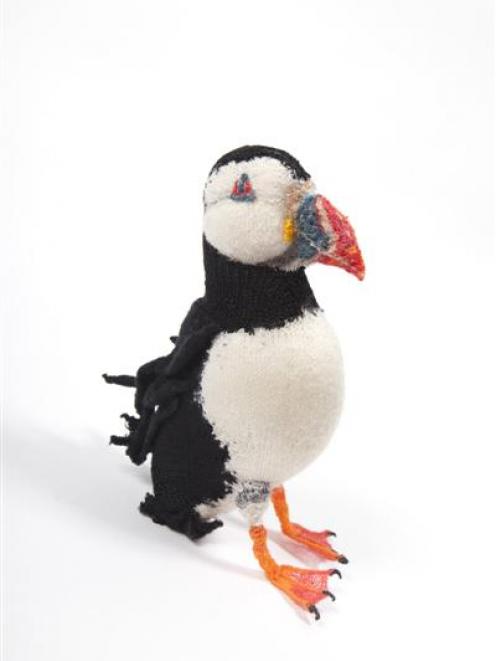 Nelson's project about the St Kildas has been simmering for some time. In 2006 she did a residency near Handa Island, a small island with a history similar to that of St Kilda and also with a huge seabird population.

''I was looking at that history and discovered some information about St Kilda. It's over-romanticised in Scotland. Everyone wants to go there because of its history.''

The archipelago of St Kilda is the most remote in the British Isles, the farthest west in the Atlantic and 64km from the larger islands of Lewis and Harris in the Outer Hebrides.

It was occupied from the Bronze Age until the 20th century, when the remaining inhabitants were evacuated in 1930.

Residents harvested seabirds such as puffins and their eggs for food by climbing the sheer cliffs and sea stacks, and raised sheep for their wool.

Now St Kilda is a tourist attraction; some of the old cottages are being restored, a ranger and volunteer conservation workers stay there in summer, and there is a missile-tracking military base.

By chance, when she was in Melbourne in 2007 she realised there was a St Kilda there as well. She enjoyed wandering around it and its European cafes.

''I had the idea of doing a project that connected the St Kildas, but I didn't realise there was a Dunedin St Kilda too.''

The artist has been intrigued that there was no ''Saint'' Kilda. The name came about probably by a mistake on a 16th-century map by a Dutch cartographer, perhaps from the old Norse word ''Skildir'', meaning shields.

''Then came the idea of what a saint is, not so much in a religious sense, but in sayings like `the patience of a saint' or `he's a saint'.

I'm interested in ways to link contemporary and historical things together.

I was thinking a way to try and link the saint thing was to look for people in St Kilda who are doing good things or contributing to the community in some sort of way. Since I've been here, I've been chatting to people at St Kilda,'' she said.

She met Tane Duff, who has a free shop giving away donated clothes, and a woman with a garden decorated with plastic flowers and wind chimes who spent years caring for her ill husband who had been a magician doing community events for people.

She planned to meet people from the surf lifesaving club and others who contribute in some way, she said.

Nelson has also been reading about the history of the borough, its environmental concerns with climate change, and, in Toitu Otago Settlers Museum, listening to oral histories of people from St Kilda.

Although she will not have time to make things while she is here, she is looking for materials that would be appropriate to use when she returns to Scotland.

''I would like to get sand from each beach and make something with it. At the moment I'm gathering materials - I try to use materials that are from the place or have connections. I thought about doing something with wool from each of the three places, because each place is famous for its wool. I could get a fleece from Scotland, Australia and New Zealand and work with a spinner to spin it into St Kilda wool.''

She leaves for Melbourne tomorrow to learn about its St Kilda, but hopes to come back to Dunedin to exhibit her work and perhaps hold a community event.

''That really needs to happen, rather than just have something on the web,'' she said.

The progress of her investigations can be followed on thekildas.com.