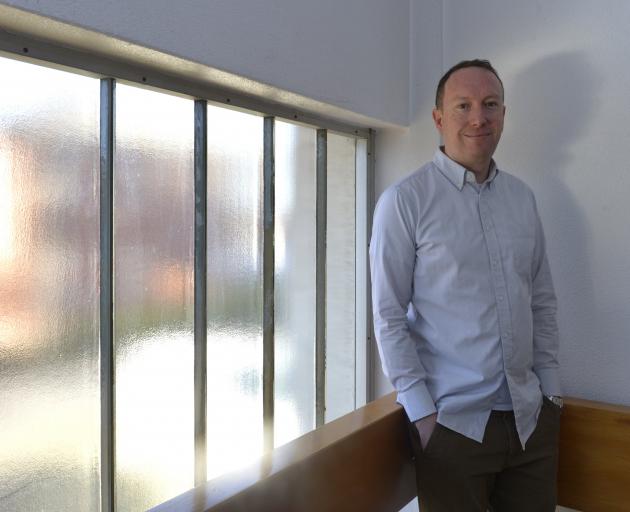 Craig Cliff has enjoyed his break from his job and the Wellington wind while in Dunedin as the Burns Fellow. Photo: Gerard O'Brien
Robert Burns fellow Craig Cliff might be working on his third book, but he has no immediate plans to give up work to write, he tells Rebecca Fox.

Craig Cliff describes the year he has taken away from his day job as a "real blessing".

The Wellington writer says he has struggled in the past to make time for his writing, squeezing it around family life and his day job at the Ministry of Education.

So receiving the Robert Burns Fellowship came at just the right time for Cliff, although moving his young family south was more complicated than first thought.

His wife works for the Police forensic examiner laboratory in Wellington, so it required her taking a year off and finding a job in Dunedin, which she did at the University of Otago.

Their two children, aged 4 and 2, have also settled.

"The kids are happy, Marisa’s enjoying her job. We’re renting a nice place and we rented out our place in Wellington. It gives me time to write. So everyone’s happy."

It was good to break out from the busy routine of life, he said. It had also enabled the family to spend some time seeing the sights around the lower South Island.

His first novel The Mannequin Makers was completed before his daughter Lia was born nearly five years ago.

He got stuck into his second novel in 2015, working in the early mornings before heading to work.

However, the birth of his son Caio meant time allocated to writing was quickly swallowed up by childcare.

Craig Cliff’s first two novels, A Man Melting: short stories and The Mannequin Maker.
"So there went my 10 hours a week of writing time. I had written 10 or 12 pages. Those pages sat there for 12 months."

Cliff then applied for the Burns Fellowship in the hope it would allow him some time to write.

Arriving in Dunedin and settling into his office in the university’s Burns building, Cliff decided to start the project fresh.

"I didn’t use those pages I’d started writing. Then when I got to the parts I knew I’d written before I went back and borrowed some parts, but I basically started at ground zero."

"So the historical stuff was a reaction to all the contemporary, and I wanted to try and flex a different muscle. Now I’ve gone back to writing something really contemporary, but it’s also got a historical dimension."

He describes it as bringing "some of the tricks of the trade" he learnt doing the historical work to his new novel.

The idea for the book came from  a fascination with 17th-century Franciscan monk St Joseph of Cupertino, who could, according to reports, levitate and read people’s minds.

Cliff questions how the Church reconciled the fantastical things St Joseph reportedly did with the research and documentation required to make him a saint.

"My natural response is to be highly sceptical. I’m not a crystal person and I’m not religious."

His novel is set in the present but involves a character travelling around Italy following in the footsteps of St Joseph.

To help with his research Cliff travelled to Italy for a week at the end of May to  take those steps himself.

"St Joseph was moved around quite a bit by the Vatican as they were worried about witchcraft — St Joseph was grilled by the Inquisition for several weeks."

It was not until Cliff returned to New Zealand that he realised he had missed a town that he wanted to detail in the book. Thankfully, the town features in several films, so he was able to use the internet to "see" the place.

"There is a balance, too, between describing a place and killing interest in the story with detail."

Cliff said he had enjoyed his time at  Otago University and the ability it has given him to enjoy the company of academics.

"I can get quite focused on the book, but I can get as much or as little of being in that environment as I like."

Cliff has also balanced his writing by taking poetry classes, being a guest speaker for English papers and attending the Dan Davin Short Story Conference in Invercargill in September, where he presented a paper on "The Moves in Contemporary NZ Short Stories".

"I’ve tried to manage my time, so I’m happy enough with the progress of my novel to say yes to things."

He’s also given a reading of the new novel at the University Bookshop this month as part of NZSA’s Salon series.

"If all I did this year is sit in a room and write a novel that would be cool, but hopefully I’m richer for the experience of having engaged in the community here, particularly at the university."

He has also been working with his publisher on publicity for the United States launch of his first novel, which is coming out there in December.

Cliff is now gearing up to return to Wellington and back to his day job, although he has often been on "phone a friend duties" this year, as he is the longest tenured member of his team.

"I will go back. I’ve still got a finger in that pie."

He sees his job as a way of staying involved in the world. When his first book was published, he was asked if he was giving up his day job.

"I thought it was a little early to sequester myself in a room and write. You need to keep building up your experience of the world and other people.

"Even now, I don’t have an immediate hanker to throw in the day job completely and write fulltime."

He liked having a job which did not involve creative writing because it used a different part of his brain.