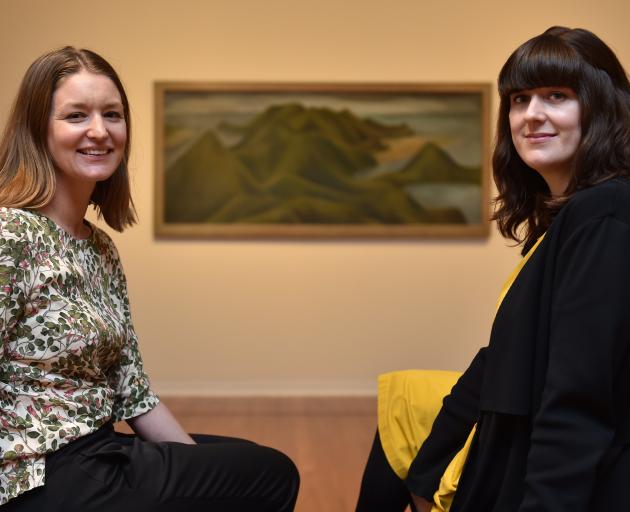 That is what curators at the Dunedin Public Art Gallery are hoping people will do as part of recently opened exhibition ‘‘A Land of Granite: McCahon and Otago’’.

They have compiled a tour of 14 places McCahon had connections with in Dunedin, and explained how they link to the works in the exhibition.

‘‘People can go on their own journey. They can do a walking tour or go a bit further afield,’’ curator Lauren Gutsell says.

A map on the back of a poster of one of the exhibition’s key works, Otago Peninsula, guides people around, starting from the gallery. 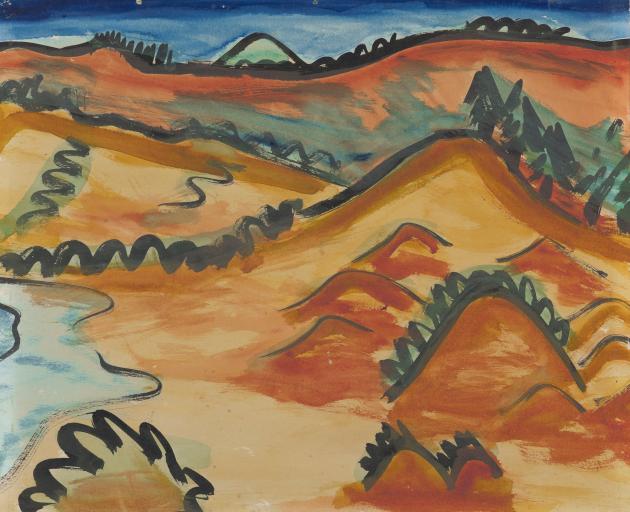 Colin McCahon’s Landscape from North end of Tomahawk Beach, 1935. Photos: Hocken Collections Uare Taoka O Hakena, University of Otago. Courtesy of the Colin McMahon Research and Publication Trust.
The exhibition takes a focused look at McCahon’s time in and relationship to Dunedin and the wider region as well as showing how that legacy is documented in various collections in Otago, at the Hocken, the Dunedin Public Library and the Forrester Gallery in Oamaru.

‘‘That’s been a high point in the exhibition, bringing together major works for the first time in this gallery.’’

While McCahon was born in Timaru, he grew up in Dunedin except for a year when his family lived in Oamaru.

His family regularly visited the DPAG, the city’s libraries and the Otago Art Society. He wrote about the importance of those experiences at a later date in literary magazine Landfall.

‘‘His awareness of art grew in his teenage years and ultimately landed with him attending the Dunedin School of Art at the end of the ’30s.’’ 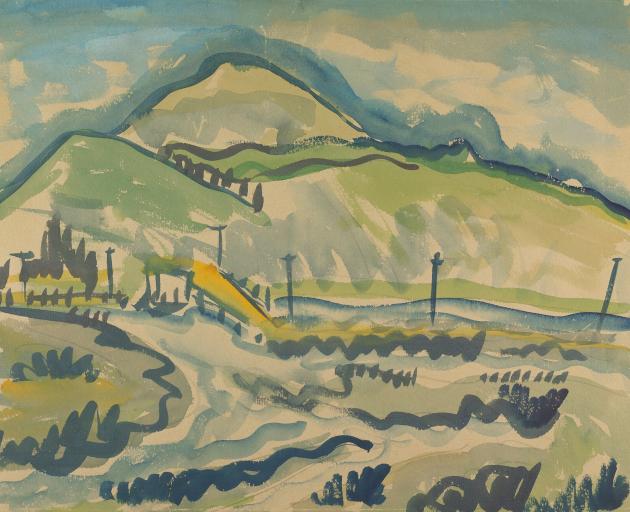 Colin McCahon’s Saddle Hill [from Taieri Mouth], 1937. Courtesy of the Colin McCahon Research and Publication Trust.
The start of the exhibition focuses on the story of McCahon’s life in Dunedin and also on the art works he made in the first part of his career. The city — particularly its landscape — was the subject of many of his works.

Included in the exhibition is a work he painted of Lake Waihola when he was 12 years old after his return to the city from the year in Oamaru.

It was at the library in Dunedin that McCahon first encountered Sir Charles Cotton’s 1921 book Geomorphology of New Zealand that proved influential in his approach to the Otago landscape.

The Hocken Collections has one of the major holdings of McCahon’s art works and archives recording his career, built from bequests from McCahon supporters.

Ms Gutsell said the works in this section ‘‘reflect the assignments and activities he was completing at art school’’.

Colin McCahon’s Otago Peninsula 1946-1949. Photo: Collection of Dunedin Public Libraries, Rodney Kennedy Bequest. Courtesy of the Colin McMahon Research and Publication Trust.
Many of those works were hung in McCahon’s parents’ Highgate, Dunedin, home and were subsequently given to the Forrester.

There is a work depicting Woodhaugh Gardens which shows the view he would have had down to the garden, possibly from the Bullock Track, which linked the suburb of Maori Hill with the garden.

‘‘By 1939 McCahon came to his first work which is talked about as his landmark painting of Otago Peninsula where he started his bigger works which moved into his 40s.’’

Curator Lucy Hammonds says when McCahon made the decision to be an artist, he still had to work out how to make a living.

He did itinerant fruit and tobacco picking work in Nelson and Otago, often cycling between the two regions.

‘‘When we look at the earliest works by McCahon we’ve got this prevailing commitment to or inquiry into the landscape. What here meant to him.’’ 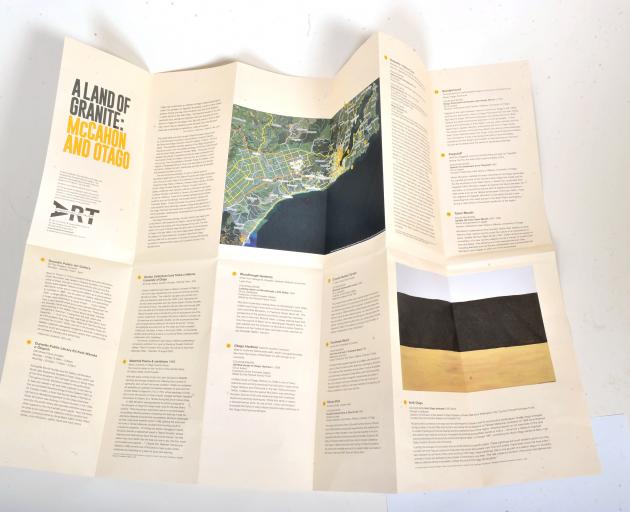 The DPAG offers a tour of spots in Dunedin connected to McCahon’s work.
Given he travelled through those landscapes by bike, it becomes apparent where his interest in the land, its geology and structure came from and how important it is to understanding his early work.

‘‘This is what the exhibition is drilling into, unpacking through his earliest decade as a painter what he was trying to achieve with the landscape.’’

That translated into three large-scale works of Otago Peninsula completed in 1939, 1946 and 1949 which together showed the formal development of his style toward a more tonal and modulated approach to palette and composition without any trappings of modern life showing.

‘‘They were works, particularly the first one from the Hocken’s collection, that he considered to be a breakthrough for him or a turning point.’’

To bring those works together with his earlier works to make visible how the painter evolved was a lovely thing to do in an exhibition, Ms Gutsell says.

Writings by and about McCahon show what his aspirations for his paintings were.

He wanted them to show the relationship between land, geology and faith, and his ‘‘hopes for the world’’, she says.

‘‘He talks about values directly in relationship to those landscape paintings as hoping people will look at the landscape and come to understanding ideas of ownership and conflict and those real kind of big humanitarian issues that he really brought to bear on the place he was living in.

‘‘They’re really complex works. They force you to really think about what the landscape is beyond a realist composition.’’

Ms Gutsell says the works in the exhibition are linked to the important people in McCahon’s life: life-long supporters, art lecturers and family.

‘‘His lecturers gave McCahon a glimpse into, a benchmark of what a painter’s life was, the relationship between working, painting, social engagement, talking about art, of being part of a creative community with the same values, who cared about similar things.’’

One of his big supporters was Rodney Kennedy, who commissioned McCahon’s second Otago Peninsula work and often fostered opportunities and organised shows to exhibit his work.

He met painter Anne Hamblett during art school and they later married in the 1940s and had four children.

They collaborated one time only on a series of paintings with Anne, who supported the family as a book illustrator, painting the activity and detail while McCahon painted the landscape.

‘‘They’re a really nice glimpse of that partnership.’’

The last part of the exhibition ‘‘jumps’’forward to McCahon’s late 1960s works which speak to his enduring relationship with the Otago landscape.

‘‘This was a body of work that was very focused on the North Otago landscape in a very direct way in 1967.’’

Despite living in Auckland since about 1953, McCahon used his memories of the Otago landscape and some short return trips to create a series of paintings and prints focused on North Otago.

‘‘They were not meant to depict exact locations but spoke to a wider region and feeling. He hoped people would stand in front of them and have a emotional and spiritual response to that land.’’

The works, unlike the first works in the exhibition, feature ‘‘severely abstracted horizontal bands of colour and form’’ giving a sense of a barren flattened landscape.

‘‘He often painted from memory. There are over 50 paintings and works of paper made in that time.’’